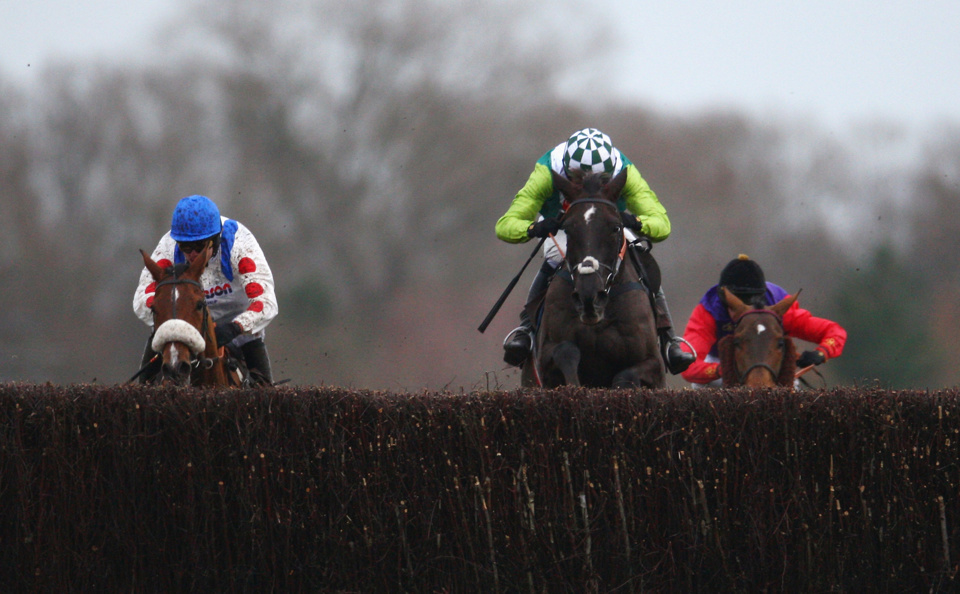 Denman famously won the Ladbrokes Trophy back in 2009 under a huge weight.

Ahead of the Ladbrokes Trophy this weekend, Sean Raymond has taken a look back at some of the legendary names to have won the Newbury handicap...

Few races can match the Ladbrokes Trophy for history and prestige in the world of equine sport, and that will once again ensure that the stands will be packed at Newbury this weekend for the latest edition.

Known to many as the Hennessy Gold Cup, Ladbrokes took over the sponsorship of the famous race in 2017, and although it may have lost some of its lustre in recent years, it remains one of the most competitive and exciting betting handicaps of the winter. The roll of honour is littered with legends of the sport, with several great weight-carrying performances firmly entrenched in the memories of national hunt racing fans.

The sight of a top-class horse lumping heavy loads around Newbury in the depths of winter remains one of the key reasons why we all love this great sport, and this weekend will offer us another chance to see memories made.

It is impossible to cover all the great names to have won the Ladbrokes Trophy, and even in the last decade we have seen Bobs Worth (2012) and Native River (2016) use the race as the springboard to glory in the Cheltenham Gold Cup, but there are certainly a number of horses that are worthy of a mention.

Chief among those is of course the great Arkle, who is widely considered to be the best chaser of all time. "Himself" won the Newbury contest in consecutive years in 1964 and 1965 having made the trip over from Ireland to carry 12-07 on both occasions, which is a feat without parallel. The second of those great victories saw Arkle give upwards of 32 lb to his rivals, but that mattered not as he ran the field ragged to saunter to victory at a more than skinny price of 8/1-on.

We skip forward 20 years for our next great Hennessy memory, with Burrough Hill Lad taking the honours in 1984 under a terrific ride from the brilliant John Francome. The 1983 Welsh National winner carried 12-00 that day to a four-length success, which was a stunning 21 lb more than the runner-up, the previous season's RSA Chase winner Canny Danny - and as far as modern racing is concerned, that day at Newbury will remain etched in the memory for many years to come.

The Jenny Pitman-trained horse achieved a Timeform rating of 184 during his career, winning a King George and a Cheltenham Gold Cup, but for many it was his Hennessy win which was the high point of one of the great careers of the 20th century.

There are a few finer sights in the sport than an eye-catching grey powering to victory in a big race, and that is exactly what we saw in 1994, when One Man served notice of his potential with a thrilling success in the Hennessy. The Gordon Richards-trained horse went on to achieve great things during his career, but those that saw the 1994 Newbury race will not forget the sight of One Man tanking through the race before popping over the last and pulling well clear of the field.

Many Clouds deserves a special mention for his success in 2014, which was followed by a Grand National win later in the same season - and the Oliver Sherwood-trained animal is the only horse to achieve the Newbury/Aintree double. His Hennessy win is perhaps forgotten given what he would achieve but like One Man, it was a crucial day in his career as we first got to see a horse who had the potential to go to the top of the staying chase division.

In terms of the 21st century, though, it is the great Denman who stands apart as the best horse to have won the race, with his two wins at Newbury the stuff of legend.

"The Tank" perhaps suffered slightly in the shadow of stablemate Kauto Star, but his successes in carrying top weight to win the race twice stands up to any achievement of his Ditcheat neighbour. The Paul Nicholls-trained horse won the race in 2007, before going on to win the Gold Cup the same campaign, but it was his second success in the race two years later that really cemented his legacy as one of the greatest equine stars of all time.

Heart problems came close to ending the career of Denman, but he managed to return to Newbury to win a second Hennessy off a mark of 174, which was 13 lb higher than in 2007. Giving lumps of weight away to the rest of the field and with doubts about his heart murmur in the front of the minds of most, Denman dazzled the racing world with a relentless galloping display, that to this day remains one of the greatest performances in the history of the sport.

Not many races can produce magical moments, but the Ladbrokes Trophy can and that is why it remains a race to saviour and cherish.