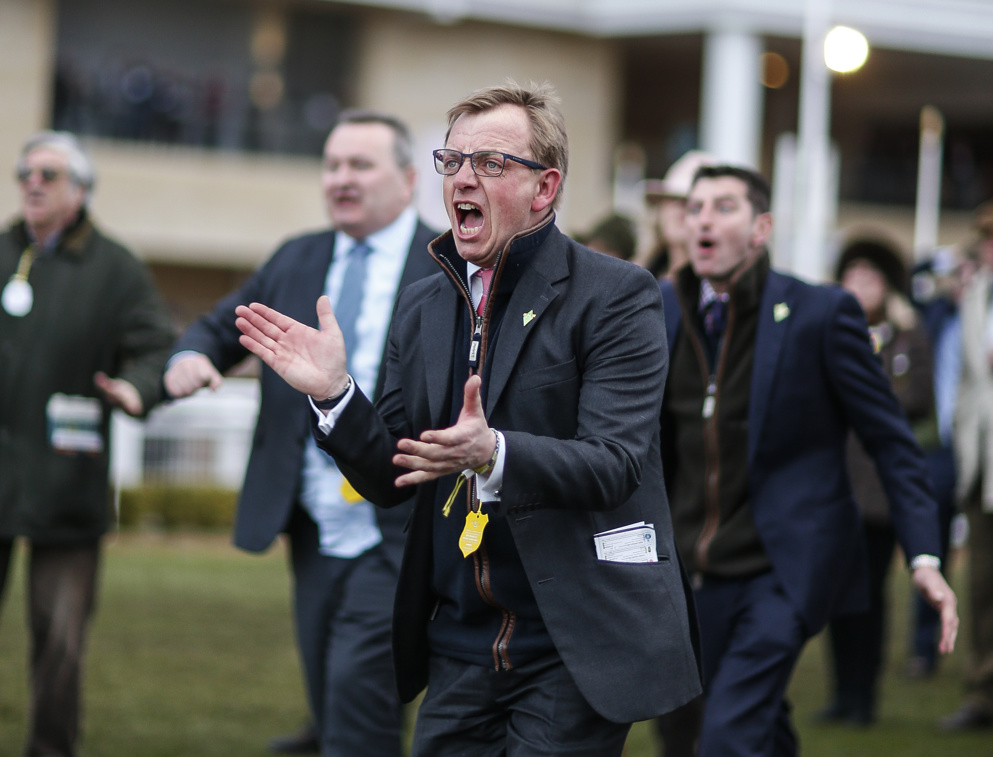 The Ballymore betting has had one-dimensional look to it for quite some time, with Envoi Allen (11/8f) conquering all and rightfully lining up as one of the strongest hopes of the week from Ireland. However, something has to finish in the places, and there also the small chance that Envoi Allen could switch to the Supreme if ground conditions end up particularly testing. I think at 20/1 (NRNB) LONGHOUSE POET makes some appeal, as quotes from connections suggest that they aiming towards this contest as opposed to the Albert Bartlett, and they looking for proper soft ground for him, which could easily materialise if the weather stays as it is. He was a bit keen when upped to 2m 6f at Leopardstown last time out and paid the consequences for that in the final few yards. Admittedly, he was beaten around 7 lengths by Envoi Allen at Naas on his penultimate start, but he was untidy at many of his obstacles on ground quicker than ideal, and to his credit stayed on nicely. A strongly run race here on a track with a stiff uphill finish will be perfect for him with plenty of cut, and I can easily see him getting in the mix for connections that won this race last year with City Island. If they do decide to head down the three-mile route, the NRNB insurance is handy to have onside. There are many horses shorter than him in the market that look to have preferred targets elsewhere, and if the rain continues to arrive at Prestbury Park, the chances of him causing an upset only increase and he shouldn't be left out of the equation.

Glenloe was the horse on everybody's lips for the Kim Muir, but with his defection I think Bob Mahler is a fair price at 25/1 to land the contest for trainer Warren Greatrex, who took this race in 2018 with Missed Approach. In-fact, Bob Mahler has had a similar campaign to Missed Approach, and was last seen showing all his battling qualities to land the Edinburgh National - one place better than Missed Approach managed to do in the same race. He looks versatile in regards to underfoot requirements, and has winning form at Cheltenham in his portfolio - in which he flew up the hill last April over a similar trip to this. With a horse with so much proven stamina, I expect him to be ridden fairly prominently and try and get into a good jumping rhythm at the head of affairs. The 5 lb rise to 140 after his most recent victory is fair, and although he has more on his plate from that rating, you couldn't have asked for a better preparation for the eight-year-old - who looks to have sound claims with the yard in much better form than they were at the start of the year.

#AD 18+ begambleaware.org; New bettors get 100% of deposit up to £50; Once per household; Min deposit £15 (no Skrill/Neteller); Wager a total of 8 times deposit + bonus, with max qualifying bet stake equal to your initial bonus amount; Bonus expires after 60 days; Min odds of 4/5 on singles, or 2/5 per leg for acca; Some bet types excluded; Free spins validity: 7 days; Free spins max. winnings = £100; See full terms; Terms apply.
get offer
Bet £10 Get £30 In Free Bets
#AD 18+. Play Safe. New customers using Promo code H30 only, Min £10/€10 stake,  min odds 1/2, free bets paid as 2 x £15/€15, free bets credited after  settlement of first qualifying bet, free bets will expire 30 days after  the qualifying bet is placed, payment method/player/country restrictions apply.
Bet £10 Get £30 Free Bets (APP Only)
#AD New UK, IE & Malta customers only. 18+. Min £10/€10 first deposit using Debit Card or Trustly. Place a bet of £10 at min odds of 1.5. Free bets expire in 90 days. Full T&Cs apply.
Welcome Offer
#AD Bet £10 & Get £50 in Free Bets for new customers at bet365. Min deposit requirement. Free Bets are paid as Bet Credits and are available for use upon settlement of bets to value of qualifying deposit. Min odds, bet and payment method exclusions apply. Returns exclude Bet Credits stake. Time limits and T&Cs apply. The bonus code SPTS365 can be used during registration, but does not change the offer amount in any way.
Bet £10 Get £60 in Bonuses
#AD New UK customers only. Register using the promo code BETFRED60, deposit and place first bet of £10+ on Sports (cumulative Evens+) within 7 days of registration. First bet must be on Sports. £20 in Free Bets to be used on Sports, £10 in Free Bets to be used on Lotto and 50 Free Spins (20p per spin) credited within 48 hours of bet settlement. Further £20 in Free Bets credited 5 days after settlement. Bonuses have a 7-day expiry. Payment restrictions apply. SMS verification and/or Proof of I.D and address may be required. Full T&Cs apply.
Bet £20 & Get It Back As CASH If It Loses
#AD New customers only. Place your FIRST bet on any Horse Racing market and if it loses we will refund your stake in CASH. Max refund for this offer is £20. Only deposits made using cards will qualify for this promotion. T&Cs apply.
Money Back As Cash Up To £20
#AD Max £20 refund on first bet. Bet must be placed in first 7 days of account opening. Only deposits made via Debit Card will be eligible for the promotion. T&Cs apply. 18+ begambleaware.org
Bet £10 Get £30 Free Bets + £10 Casino Bonus
#AD Minimum deposit of £10 using deposit code 30F - A qualifying bet is a ‘real money’ stake of at least £10 placed on any sports market - Minimum odds of 1/2 (1.5) - Free bets credited upon qualifying bet settlement and expire after 7 days - Free bet stakes not included in returns - Casino Bonus must be claimed within 7 days • To withdraw bonus/related wins, wager bonus amount x40 within 14 days • Wagering req. vary by game • Withdrawal restrictions and Full T&C’s apply. 18+ begambleaware.org
Bet £10 Get £30 Free Bets
#AD Offer includes a free £1 Race Index spread bet to try out our exciting 50-25-10 race markets. Place a £10 fixed odds bet at minimum odds of 1/2. Get 2 x £10 free fixed odds bets + 2 x £5 free Winning Favourites spread bets. Bet with live streaming on all racing and greyhounds! Ts&Cs Apply. 18+ begambleaware.org
Bet £10 Get £10 + £10 Casino Bonus
#AD New UK customers (Excluding NI) mobile only. £20 in FREE Bets (FB) as £10 in sports bets & a £10 casino bonus (CB). Min stake £10. Min odds Evs. FB applied on 1st settlement of any qualifying bet. FB 7 day expiry. 1 FB offer per customer, household & IP address only. Payment restrictions. 14 days to accept £10 CB, then active for 3 days. CB 5x wagering & max redeemable £100. Game restrictions apply. Cashed out/Free Bets won’t apply. 30 days to qualify. 18+.  T&Cs apply
£25 Free Bet + 10 Free Spins
If your account has Sportsbook losses at the end of your first day's betting, QuinnBet will refund 50% of your losses as a Free Bet up to £25 (min 3 bets) Plus 10 Free Spins on Asgard Warriors. Even if your account is up, you're guaranteed a £5 Free Bet Plus 10 Free Spins provided you place at least 1 bet of £10 or greater at the minimum odds. T&Cs apply | 18+ New UK Customers Only | BeGambleAware.org
Latest racing results
Warwick
14:15
Full Result
1stNotnowlinda
11/8F
2ndMaridadi
18/1
4thValentine Getaway
18/1
Worcester
14:06
Full Result
1stFortunes Melody
11/8F
2ndVoice Of Calm
11/4
3rdFairfield Ferrata
16/1
Thurles
14:00
Full Result
1stFoniska
5/2F
3rdDrummin Life
9/2
4thSkyquake
11/1
View All Today's Results