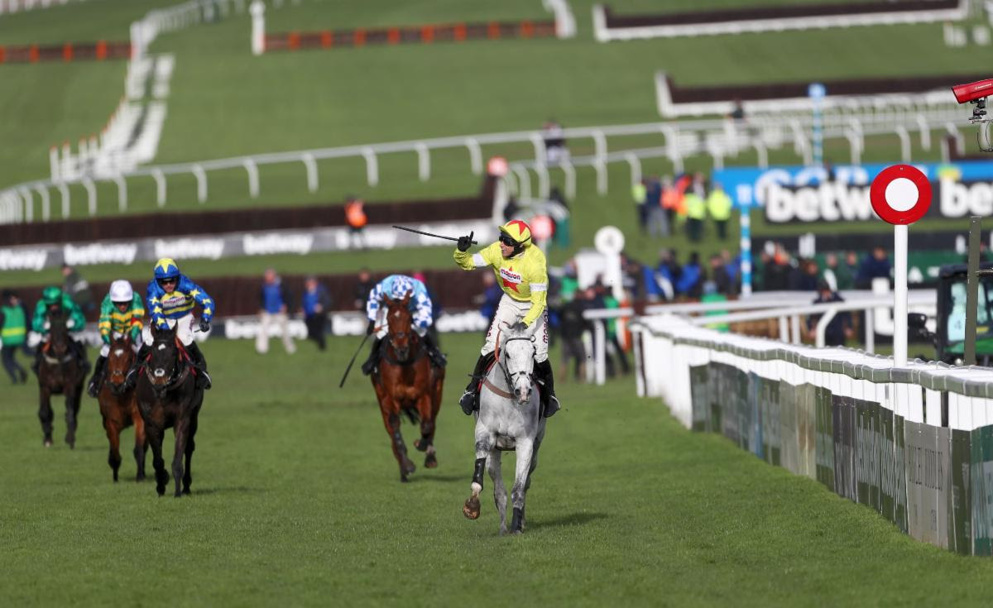 Champion Chase hero Politologue can prove too good for his rivals in the Clarence House Chase at Ascot.

In this week's column, Ed Quigley takes a look at this weekend's action at Ascot and Haydock Park, which includes his Clarence House Chase tip, before giving his long range views on the Queen Mother Champion Chase...

Expect attritional conditions at Haydock Park on Saturday where stamina - as it often is, will be the name of the game in the Peter Marsh Chase at 14:40. SAM BROWN fits the bill nicely, as this lightly-raced nine-year-old relishes hock-deep ground. He has form figures on Heavy of 1113 - including a 15-length romp in the Grade 2 Novice Chase on this card a year ago. The third place in that sequence of form figures was when beaten only three lengths by Imperial Aura when trying to concede 2lb to him in the Colin Parker Memorial at Carlisle in November. Given that the Kim Bailey representative is now rated 163, Sam Brown looks nicely treated off 152, stepping back up in trip which looks sure to suit. The Anthony Honeyball team are in fine fettle at present, and he could take some stopping as he is ticking most of the right boxes.

Over at Ascot, I think it could easily be another successful Saturday for Paul Nicholls, as POLITOLOGUE will take all the beating in the Clarence House Chase at 15:35. The reigning Champion Chase winner absolutely bolted up when running away with Tingle Creek at Sandown, and should enjoy a return to this venue with ground, which is likely to be on the slow side, perfect for him. Defi Du Seuil is on a retrieval mission after two absolutely lacklustre displays, and it may be a case of last chance saloon in regards to dining at the top table for the winner of this race 12 months ago.

Also on the card (1.50), I think DANNY KIRWAN should find things much easier, down in class and trip, with the return to this venue is a positive. He found Grade 2 company too hot over 3m at Cheltenham last time out, in which it appeared as though his stamina gave away as they turned into the home straight and this looks much more his bag. Heading into handicap company off 134 I like his chances with conditions to suit at a track where he bolted up on his penultimate start. The yard continue to be in red-hot form and he cannot be overlooked.

If Politologue struts his stuff at Ascot this weekend, then the Champion Chase is starting to build up as Chacun Pour Soi versus Paul Nicholls' popular grey. However, looking through the antepost market, it looks as though, as is often the case, the race could cut up, and the contest could easily end up being a single-figure field. An ageing Altior is set to head to the Game Spirit at Newbury next month where he is due to bump into GREANETEEN. The seven-year-old has been progressive throughout his last few runs, winning the Haldon Gold Cup on his penultimate start, before running a career best in defeat when second to Politologue in the Tingle Creek on ground that was fairly testing. He has found 23lb of improvement, as he was rated 138 this time last year, and is now up to 161. With just the six chase starts under his belt he is still unexposed and on upward curve. If he can shake up Altior next time out then he puts himself in the mix and his price can head south for the big one in March.

Politologue leads home a @PFNicholls one, two in the Betfair Tingle Creek Chase at @Sandownpark

What an afternoon @harryskelton89 is having!