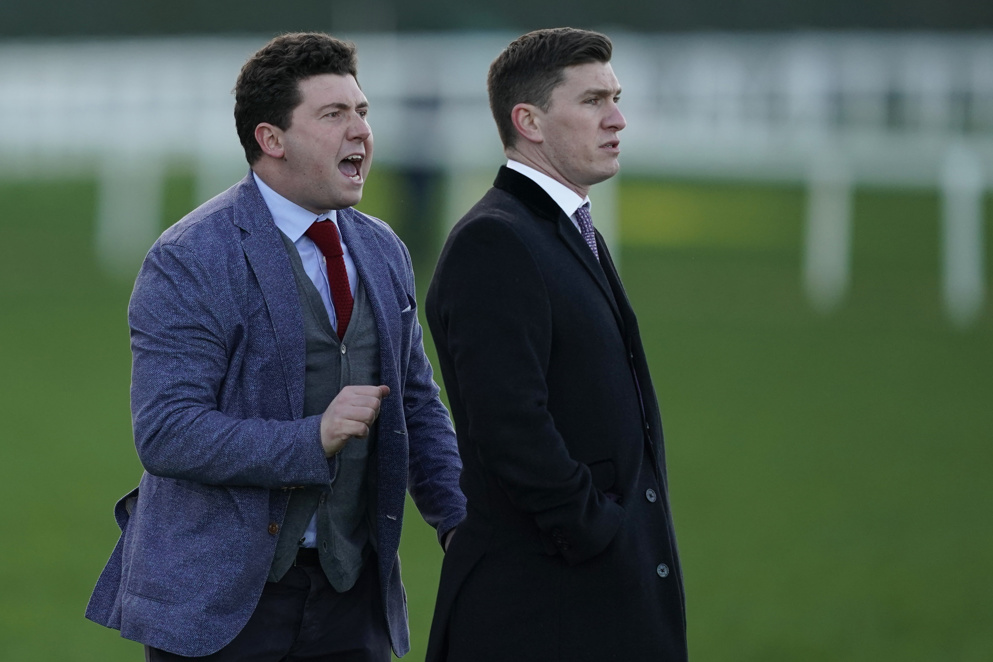 Olly Murphy has reported his string to be in good form ahead of Cheltenham.

Olly Murphy has reported his string to be in good order ahead of next month’s Cheltenham Festival, as he prepares to send his strongest squad yet to the four-day meeting.

Murphy landed the first Grade 1 of his fledgling training career when Itchy Feet cruised clear of Midnight Shadow to take the Scilly Isles Novices’ Chase at Sandown earlier this month, and it is the six-year-old who leads the Stratford-based handler’s quest for a maiden Cheltenham Festival victory.

“He couldn’t have been any more impressive at Sandown and he’s in good form. He’s back cantering away and we’re very much looking forward to running him in the Marsh.” Said the trainer regarding the son of Cima De Triomphe.

That Sandown victory came on the back off a facile 26-length win in a three-runner Leicester event, which was little more than a schooling in public exercise for last year’s Supreme Novices’ Hurdle third.

To then land a Grade 1 over fences on just a second start over the larger obstacles is no mean feat, particularly when you consider that he pecked on landing at the second last at Sandown, and Murphy thinks the experience of competing in the Scilly Isles will stand him in good stead.

He said: “He’s still a little bit novicey and that experience will have done him the world of good. He looks a horse who appears to be on an upward curve and hopefully he’ll just keep improving through Cheltenham, where he ran well last year, and into next year.”

The Warren Chase handler has a strong hand in the novice chasing division, and could well get off to a flying start on the Tuesday with Brewin’upastorm, who’s not without a chance in the Arkle Trophy.

Murphy said: “He’s in great form and I’m looking forward to running him in a strongly run two miles race which I think now is where he’ll be at his very best. He’s in a very good place and is very good fresh so it doesn’t bother me going there without a prep run.”

The seven-year-old, who finished fourth over hurdles in the Ballymore at the Festival 12 months ago, hasn’t been seen since making it two from two over fences at Taunton in November, and despite claiming some useful scalps in those outing, many have suggested that he doesn’t have the experience to play a part in the premier two-mile novice test at the Festival.

However, it’s not something that’s phasing Murphy. He said: “I’ve no real concerns about a lack of experience, he’s a winner of a point-to-point and he got a very good taste of things the first time he ran over fences at Carlisle. They went very hard and he had to figure things out quickly and that should stand him in good stead.”

Murphy has amassed 186 winners under Rules since joining the training ranks in 2017, but one thing that is yet to appear on the handler’s CV is a Festival victory. Along with the aforementioned duo, the man who spent a period of time working as Gordon Elliott’s assistant in Ireland has assembled a select squad to go into battle with at Cheltenham.

“Skandiburg leads a small but select team in the handicaps and it would be nice to think we could come away with something.” Said Murphy of his Festival chances away from the Grade 1 contests.

Skandiburg, could be joined at the Festival by The Butcher Said, Strong Glance and The Wolf, who are the other Warren Chase inmates holding Cheltenham handicap entries.

However, one horse who looks increasingly likely to skip the Festival is Thomas Darby, with last year’s Supreme Novices’ Hurdle second instead targeting a Grade 1 mission at Aintree in April, and a tilt at the Aintree Hurdle over two and a half miles.

He said: “I haven’t really bought into all the Champion Hurdle chat to be honest; he needs two and a half miles. If it came up very very soft, we might consider it, so we’ll leave him in for now, but I would say it’s very unlikely.

“I just think two and a half miles brought out plenty of improvement at Ascot, Richard (Johnson) said he was staying right on up to the line and hopefully he’ll find further improvement as he’s still very much unexposed. So it’s fingers crossed!”