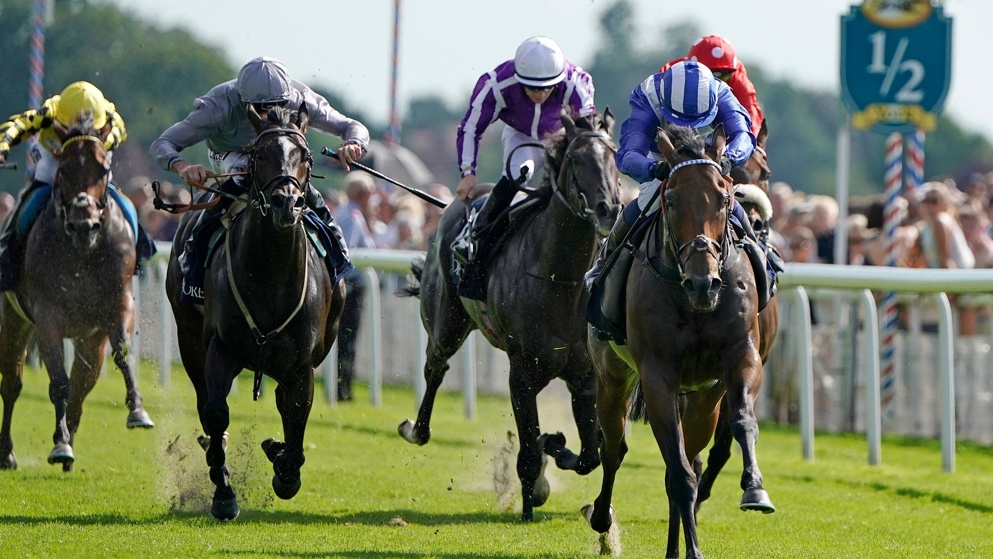 Which sprinter can follow in the footsteps of Battaash at York

There's a fascinating renewal of the Group 1 Nunthorpe Stakes at York on Friday afternoon, as some fast improving youngsters take on a host of proven top-class speedsters, and our man Steve Chambers previews the feature race of the day on day three of the Ebor Festival here and picks out a value play against the fancied runners....

James Tate's Royal Aclaim has been a real emerging force in the sprinting division this season, but the three-year-old filly will need to continue on an upward curve if she is to reign supreme in the Nunthorpe Stakes. Unbeaten in her three starts, the daughter of Aclaim won impressively at Bath in May on only her second start, but it was the manner in which she scooted to a stunning two-length victory in the Listed City Walls Stakes at York last time out that has earned her quotes of 13/8 favourite for Friday's contest.

A real speedball, who has shaped like she could be a real top notch Group performer, Royal Aclaim will receive weight from her older rivals here, but this is a huge step up in class, and while she has packs of potential and there maybe limited proven top-class rivals lining up here, she will need to be an absolute sensational sprinter to win this event on only her fourth start, and she could be worth taking on at paltry odds.

Arguably, an even more fascinating runner is the Richard Fahey-trained The Platinum Queen, who is the 3/1 second favourite, and she will look to be the first two-year-old since the legendary Kingsgate Native in 2007 to win the Nunthorpe as a juvenile, and she is hugely exciting. Hampered in the Queen Mary at Royal Ascot, she bounced back to form with a win at York, before she went on to win the Alice Keppel at Goodwood in fine style. Supplemented for this event, Fahey must fancy that she can run a huge race off a featherweight of 8st 2lbs, but taking on her elders she will face a massive assignment, and it's going to be tough.

John Quinn's Highfield Princess has been one of the star sprinters of the season as having won the Group 2 Duke Of York Stakes back in May at York, she then went on to finish a decent sixth in the Platinum Jubilee Stakes before heading over to France and romping to glory in the Prix Maurice De Gheest. An eye-catching 10/1 chance for this event, the five-year-old mare is a class act, but the drop back to five furlongs could well hinder her chances, and she may just lack the pace of some her rivals.

A real 5f specialist is Khaadem, who built on a fine win in the Palace House Stakes at Newmarket by storming to victory in the King George Stakes at Glorious Goodwood, and at 11/1 will appeal to many. However, the Charlie Hills-trained gelding will need to improve again stepping up to the highest level and she may just lack the class of some of his rivals.

One contender with a Group 1 win on his CV is Kevin Ryan's EMARAATY ANA, who is an attractive 16/1 to land this prize and the former Sprint Cup winner at Haydock has to be considered if at his best. He was a sparkling runner-up to Winter Power in this race 12 months, before he went on to Group 1 glory at Haydock Park in the Sprint Cup, and while's not tasted victory since he shaped like he could be reaching boiling point this season. Unplaced in the Platinum Jubilee, he improved significantly when sixth in the July Cup at Newmarket, and with a drop back to five furlongs not likely to trouble him then he could well be a shock winner of this contest, as he's likely to be prominent from the start and he could well remain in the front in the closing stages.

Of the others, Winter Power is back for another crack, but the 20/1 chance has been struggling for form of late and can be ignored, while the likes of Flotus, Lazuli and Raasel add more depth to the contest, but that trio don't strike out as Group 1 sprinters.

#AD 18+ begambleaware.org; New bettors get 100% of deposit up to £50; Once per household; Min deposit £15 (no Skrill/Neteller); Wager a total of 8 times deposit + bonus, with max qualifying bet stake equal to your initial bonus amount; Bonus expires after 60 days; Min odds of 4/5 on singles, or 2/5 per leg for acca; Some bet types excluded; Free spins validity: 7 days; Free spins max. winnings = £100; See full terms; Terms apply.
get offer
Bet £10 Get £30 In Free Bets
#AD 18+. Play Safe. New customers using Promo code H30 only, Min £10/€10 stake,  min odds 1/2, free bets paid as 2 x £15/€15, free bets credited after  settlement of first qualifying bet, free bets will expire 30 days after  the qualifying bet is placed, payment method/player/country restrictions apply.
Bet £10 Get £30 Free Bets (APP Only)
#AD New UK, IE & Malta customers only. 18+. Min £10/€10 first deposit using Debit Card or Trustly. Place a bet of £10 at min odds of 1.5. Free bets expire in 90 days. Full T&Cs apply.
Welcome Offer
#AD Bet £10 & Get £50 in Free Bets for new customers at bet365. Min deposit requirement. Free Bets are paid as Bet Credits and are available for use upon settlement of bets to value of qualifying deposit. Min odds, bet and payment method exclusions apply. Returns exclude Bet Credits stake. Time limits and T&Cs apply. The bonus code SPTS365 can be used during registration, but does not change the offer amount in any way.
Bet £10 Get £60 in Bonuses
#AD New UK customers only. Register using the promo code BETFRED60, deposit and place first bet of £10+ on Sports (cumulative Evens+) within 7 days of registration. First bet must be on Sports. £20 in Free Bets to be used on Sports, £10 in Free Bets to be used on Lotto and 50 Free Spins (20p per spin) credited within 48 hours of bet settlement. Further £20 in Free Bets credited 5 days after settlement. Bonuses have a 7-day expiry. Payment restrictions apply. SMS verification and/or Proof of I.D and address may be required. Full T&Cs apply.
Bet £20 & Get It Back As CASH If It Loses
#AD New customers only. Place your FIRST bet on any Horse Racing market and if it loses we will refund your stake in CASH. Max refund for this offer is £20. Only deposits made using cards will qualify for this promotion. T&Cs apply.
Money Back As Cash Up To £20
#AD Max £20 refund on first bet. Bet must be placed in first 7 days of account opening. Only deposits made via Debit Card will be eligible for the promotion. T&Cs apply. 18+ begambleaware.org
Bet £10 Get £30 Free Bets + £10 Casino Bonus
#AD Minimum deposit of £10 using deposit code 30F - A qualifying bet is a ‘real money’ stake of at least £10 placed on any sports market - Minimum odds of 1/2 (1.5) - Free bets credited upon qualifying bet settlement and expire after 7 days - Free bet stakes not included in returns - Casino Bonus must be claimed within 7 days • To withdraw bonus/related wins, wager bonus amount x40 within 14 days • Wagering req. vary by game • Withdrawal restrictions and Full T&C’s apply. 18+ begambleaware.org
Bet £10 Get £30 Free Bets
#AD Offer includes a free £1 Race Index spread bet to try out our exciting 50-25-10 race markets. Place a £10 fixed odds bet at minimum odds of 1/2. Get 2 x £10 free fixed odds bets + 2 x £5 free Winning Favourites spread bets. Bet with live streaming on all racing and greyhounds! Ts&Cs Apply. 18+ begambleaware.org
Bet £10 Get £10 + £10 Casino Bonus
#AD New UK customers (Excluding NI) mobile only. £20 in FREE Bets (FB) as £10 in sports bets & a £10 casino bonus (CB). Min stake £10. Min odds Evs. FB applied on 1st settlement of any qualifying bet. FB 7 day expiry. 1 FB offer per customer, household & IP address only. Payment restrictions. 14 days to accept £10 CB, then active for 3 days. CB 5x wagering & max redeemable £100. Game restrictions apply. Cashed out/Free Bets won’t apply. 30 days to qualify. 18+.  T&Cs apply
£25 Free Bet + 10 Free Spins
If your account has Sportsbook losses at the end of your first day's betting, QuinnBet will refund 50% of your losses as a Free Bet up to £25 (min 3 bets) Plus 10 Free Spins on Asgard Warriors. Even if your account is up, you're guaranteed a £5 Free Bet Plus 10 Free Spins provided you place at least 1 bet of £10 or greater at the minimum odds. T&Cs apply | 18+ New UK Customers Only | BeGambleAware.org
Latest racing results
Worcester
17:40
Full Result
1stCabayo Lady
13/2
2ndCall Blue
4/1
3rdWell Done Dani
100/1
Chelmsford
17:30
Full Result
1stLady Lavina
13/2
2ndShe's Hot
4/6F
3rdLittle Lips
11/1
Thurles
17:25
Full Result
1stThe Very Man
11/10F
2ndSundial
6/1
3rdSupreme Jet
18/1
View All Today's Results