Paul Nicholls Stable Tour: The low-down on his main hopes 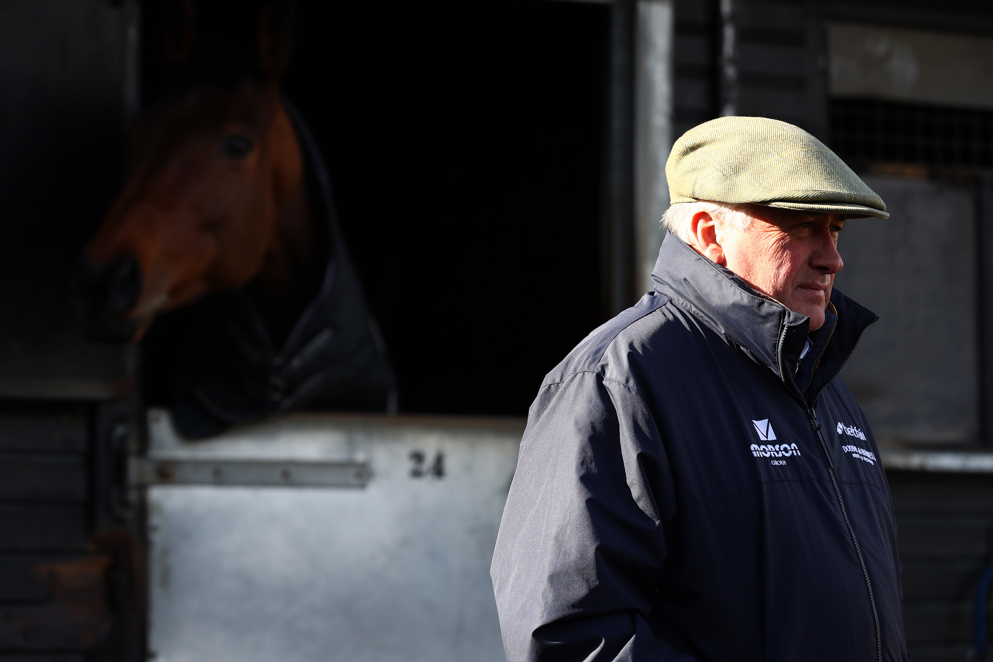 Paul Nicholls opened the doors at Ditcheat to the media on Thursday.

We've picked out the best quotes from Paul Nicholls' Cheltenham media day, as he discusses the chances of each of his big stars at the Cheltenham Festival, including Solo, Clan Des Obeaux and Frodon...

On Solo, who's fired into favouritism for the Triumph Hurdle after a fine win last weekend...

"He was going to go to Wincanton the week before, he was always going to run, and when that was off he went to Kempton. Johnny (de la Hey) and I deliberated the week before about whether to wait for Kempton, but we wanted to take the easier route and see what we’ve got, but he was always going to run. Some of the French horses don’t all perform first time, so it was good to see him do it.

"He’s got a mark of 157 now and I think the handicapper must have got a ruler out and worked out that we’re 10 lengths in front of the rest and put him up 10 lb. He won’t run in a handicap, but it’s quite a lofty rating if you think he’s only rated the same as some in the Champion Hurdle."

On Dynamite Dollars, who looks a lively outsider for the Champion Chase

"We always had the plan to run him in the Game Spirit, before heading to the Champion Chase. For a horse who was having his first run outside of novice company, and hadn’t run for a year, I thought it was a blinding run to be beaten three and a half lengths.

"He basically jumped the last in front, and he’s improved enormously since that run. Harry (Cobden) said to me that he jumped the second last going well and thought, ‘I won’t commit, just incase he’s a little bit tired and just ask him to jump the last’, and he probably wishes he’d let him stride on from the back of the second last! He’s improved enormously since that day - he worked nicely this morning at Wincanton - he won’t mind it raining and he looks a real lively outsider in my book. He does need to improve on that Newbury run to put him right in the mix, but he’s bound to come on from that.

... and stablemate Politologue, who was second in the race last year...

"I think he’s overpriced (in the Queen Mother Champion Chase). When you look at his two runs, particularly earlier in the season behind Defi Du Seuil when giving him weight, and his run last year in the Champion Chase, he came alive. He’s in that sort of shape now, and although he’s got it all to do to win a Champion Chase, he’s a big each-way price."

On the suggestions that Clan Des Obeaux isn't suited by Cheltenham...

"Those sorts of things are there to be proven wrong; he hasn’t run badly at Cheltenham and he should never have run in the Triumph Hurdle - he was just there as the owner wanted him to run - and he then ran well in novice chases.

"He’s always run well here, he ran well in the Gold Cup last year, he doesn’t not act on the track and he’s just a different horse this year. In the King George over three miles, he stayed on and Sam (Twiston-Davies) couldn’t pull him up, and he looked particularly impressive this morning.

"He’s in a good place, and we’ve learned that a different preparation helps, but until he wins at Cheltenham they’ll say he doesn’t act at Cheltenham, but that’s the same with every horse.

"I’m very happy with the prep we’ve had with him, and the way he went this morning (when working at Wincanton on Thursday morning) and the way he looks. He's been good each time he’s had a gap, and the improvement from Haydock to Kempton last year was huge - and Down Royal to Kempton this season. We don’t need improvement from Kempton to Cheltenham, but I know how to train him now."

On Frodon, who will aim to win the Ryanair Chase for the second year running...

“He didn’t have an ideal preparation before Christmas, running in the Old Roan Chase off top weight and using that as a prep for the Betfair Chase, and he completely underperformed (at Haydock).

"It's about the only time he’s been disappointing for us and we actually found out that he had Grade 4 ulcers. It’s odd, really, in all the seasons that he’s been with us he’s never had ulcers, or a problem, but for whatever reason he had them really bad. Grade 4 is as bad as you can get them, we treated him after Christmas for that, got those cleared up and away and went up to Kempton.

"I thought he’d win and he did it quite nicely. He worked very well with Clan Des Obeaux this morning (Thursday) down at Wincanton, more of his free and enthusiastic self, and gave Clan a good toe and kept on galloping. He loves this time of year, and he’s back where he wants to be.

"He’ll run in the Ryanair Chase. He’s in the Gold Cup, but he’s almost certain to run in the Ryanair unless things change enormously. He loves Cheltenham, he loves going left-handed and he loves that course. If it kept raining it wouldn’t do him any harm, but he’s in a really good place with himself and he’s ready to defend his crown. I think he’ll run very well again, he never knows when he’s beat and I was really pleased with him this morning."

On Cyrname, and his recovery since his fall at Ascot...

"He’s actually in Newmarket to have a bone scan, not because he’s been wrong - ever since he’s run he’s been 100% - but Johnny (de la Hey) and I just wanted to send him there and give him the once over and make sure we’re not missing anything.

"If he’s alright, we’ll quietly creep on and we might make a plan about running him somewhere, but he’s basically 100%. We’ll get him back, possibly Aintree, but it wouldn’t worry me if we waited and went to the Oaksey Chase at Sandown at the end of the season, to give him plenty of time to get him right.

"We haven’t made a plan yet, we’re just going to see what the vets say, but my gut feeling is there’s nothing wrong with him. We just want to make sure we’re not missing anything before we crack on. I’m not sure what else we could go for, I genuinely think he’s a two and a half mile horse, so the Oaksey Chase would suit well if we decide to go."

"He hasn’t had a great prep because he had to go to Fontwell on Sunday, so he’s had two hard races in a week, so he’s got to get over those really, but he’s the only one I’ve got for the Foxhunters Chase. If we can get him right up to his best, he’s not without a chance in a very open-looking Foxhunters."

On Sir Psycho, who heads to the Triumph Hurdle...

"We thought he was our main contender before Solo came out last week. He’s done really well, and progressed really well from a very slow start. He was a bit of a Jack the lad to start with, not putting it in at home, and he was probably well named.

"He's progressed well, and at Exeter on New Year’s Day he won an all-age novice hurdle by 36 lengths. To make sure that wasn’t a fluke we went off to Haydock the other day in the Victor Ludorum and he absolutely hosed up again. He’s now off a mark of 146, which is right up there with the top juveniles, and he’ll run in the Triumph Hurdle.

"A fast run race, where you can just go behind the gallop and sit off the pace will suit him well, and he’ll gallop all the way up the hill. He won’t mind it whatever the ground is, but he’s a progressive smart young horse.

"Whether he’s in the mould of Solo is a different matter, I would say probably not on what I’ve seen, but he’s a horse who will win a lot of races and he’ll give a great account of himself at Cheltenham cause he’s tough and he’ll gallop all the way up the hill."

"He’s a nice horse, and has won his last three races over fences, having won two over hurdles last year. He won at Ascot, Musselburgh and at Fakenham last week, and it was his third run which enabled me to qualify him to run him in the Grand Annual.

"He’s now rated 150 - he’s in the Arkle as well - but I think the Arkle is a tough race and if you think he can go and win an Arkle, he can go very well in a Grand Annual off 150. I know he’s only run three times, but he jumps well and he’s a solid sort of horse.

"I suspect he will go to the Grand Annual unless there’s any hiccup with him, otherwise I’ll wait for Aintree for the Grade 1 novice chase there. But he’s done really well, he’s a nice young improving horse, looks great and has to go well in the Grand Annual I’d say. Hopefully moving forward, in a few years' time he might be rated 160."

"He joined us in the summer after winning his only start at Auteuil in the spring, and we went to Cheltenham in November when he was pulling very, very hard and it was a bit of a disaster.

"We found out he had quite bad ulcers so we treated him for that and went to Ludlow. He was much more amenable and absolutely bolted in, winning really really nicely, and we’ve kept him back. He’s got a mark of 140, which puts him in between the horses at the top of the Boodles and the Triumph Hurdle; I haven’t really spoken to J.P. about what they’d like to run him in, but I’d guess it would be the Boodles.

"He worked at Wincanton this morning with the others, went very nicely, and he’s a nice horse. Some of the French horses take a little while to settle into our routine and to relax, but he’s got there now and I’d say he’s quite a smart young horse."

On his approach to Cheltenham's handicaps, and not being shy to find opportunities elsewhere...

"We have some nice horses, not a big team just a nice selective team. We’re excited about the good races - the Champion Chase, the Gold Cup and the Ryanair, and it’s nice to have a good chance in each of those.

"I looked at the handicaps this morning, top weight is going to be 11-12 and the bottom weight is going to be about 10-12, and so many horses are going to get balloted out, so just we’ve just got to get the right ones in or it’s a waste of time. I’d rather win races at other places and I’m not going to run something just for the sake of it. So we’ll be selective about what we run in and go elsewhere."