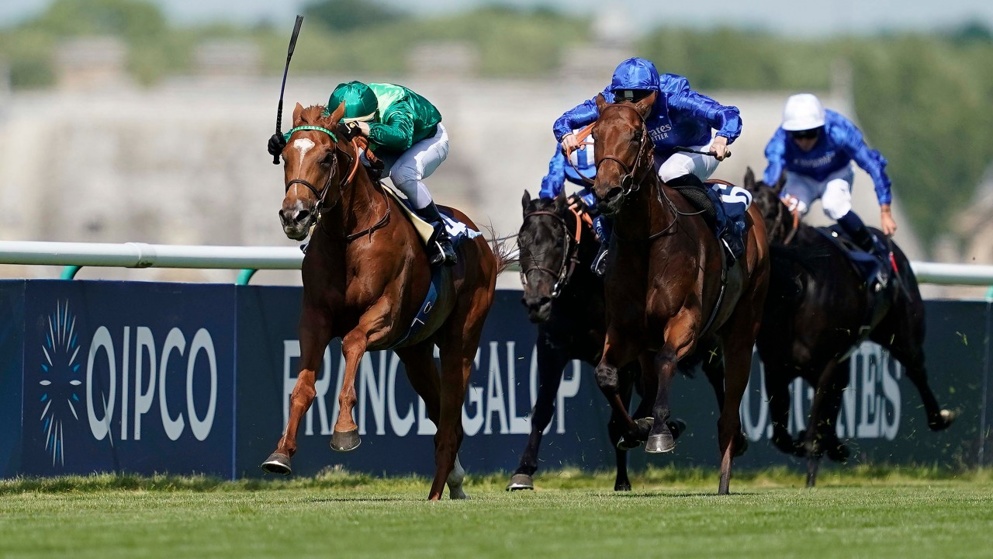 Nick Seddon profiles Sottsass, who is one of the leading French-trained challengers for this weekend's Prix de l'Arc de Triomphe...

Sottsass was bred to be smart as a son of Siyouni and a half-brother to the multiple Grade 1-winner Sistercharlie, and he was eased into things during his juvenile campaign, making just two starts. His smart pedigree and powerful connections meant that he was well-supported on reappearance in a Group 3 contest at Longchamp the following April, and having finished a close-up fifth there, he took advantage of the drop into listed level when storming home at Chantilly a month later.

An engagement in the French Derby followed that June, and while Sottsass was a relatively unfancied 13/1 shot behind the hot favourite Persian King, he took the step up in class in his stride, powering clear of that rival to seal a two-length success. That win propelled him into the Arc picture, and he was a comfortable winner of the Prix Niel - a registered trial for this race - on his next start that September.

Sottsass was well-fancied for last year's Arc, and he produced an excellent effort, following Enable through into proceedings before eventually finishing third behind her and the eventual winner, the fast-finishing Waldgeist.

This season has been moulded around a repeat bid, though he hasn't shown the improvement from three to four that was perhaps expected of him, disappointing when fourth on reappearance in difficult conditions in the Prix d'Harcourt at Longchamp in May. He returned to winning ways in the Prix Ganay at Chantilly the following month, but has been beaten twice since; first in Group 3 company at Deauville in August, before finishing fourth behind Magical in the Irish Champion Stakes earlier this month. It's worth noting that both of those outings came over a mile and a quarter, however, and it isn't out of the realms of possibility that he's been trained to peak here.

Waldgeist pulls off the shock, pipping Enable to the win in the last 50 metres!

Conditions: Sunday's race is likely to be run in very soft conditions, and while Sottsass has been defeated in each of his three outings in this kind of going, his best effort to date came in last year's Arc. That race was run in similar conditions, meaning any rain between now and the weekend should hold no fears.

Course form: Third in the Arc last year, Sottsass has shown that he's more than capable of handling the unique test that the race provides. He's won over the Arc course and distance in the past when striking in the Prix Niel, and Jean-Claude Rouget will hope that the return to a mile and a half here will bring about a career best effort.

Needs more: As mentioned above, Sottsass' standout performance came when finishing an excellent third in last year's renewal. While he's shown some consistently smart form in his four outings so far this campaign, it's below the levels that you'd expect from an average Arc winner, and he will likely need a career best effort to come out on top.

Rouget: While Sottsass represents a powerful and hugely experienced trainer in Jean-Claude Rouget, the Arc is one race that has so far alluded him during his career. Furthermore, Sottsass looks to be his yard's second string behind the unexposed three-year-old Raabihah.

How will Sottsass fare in the 2020 Prix de l'Arc de Triomphe?

The verdict on Sottsass very much depends on the eye of the beholder, and he would have strong claims if able to replicate his effort to finish third in last year's renewal. He was ultimately well held by Enable on that occasion, however, and while he's shown some glimmers of very smart form this term, he hasn't given the distinct impression that he's kicked on from three to four. The forecast rainfall should hold no fears, and if you're of the view that he's been trained to peak in Paris, it's certainly conceivable that he could produce a career best effort now returned to a mile and a half. However, based on what he's shown so far, he will need at least two to falter for win purposes, and looks set to fight it out for minor money - meaning the 10/1 on offer for a place at the time of writing is perhaps a touch short for an each-way interest.

Verdict: Something to prove

Today's horse racing tips at Lingfield on Tuesday. Our resident tipster Chris Baker has one bet for the racing…

Three Eye-Catchers: Drake looks made for Uttoxeter
By Nick Seddon

Nick Seddon reviews the weekend’s action at Uttoxeter and Southwell, and picks out three horses who he thinks…