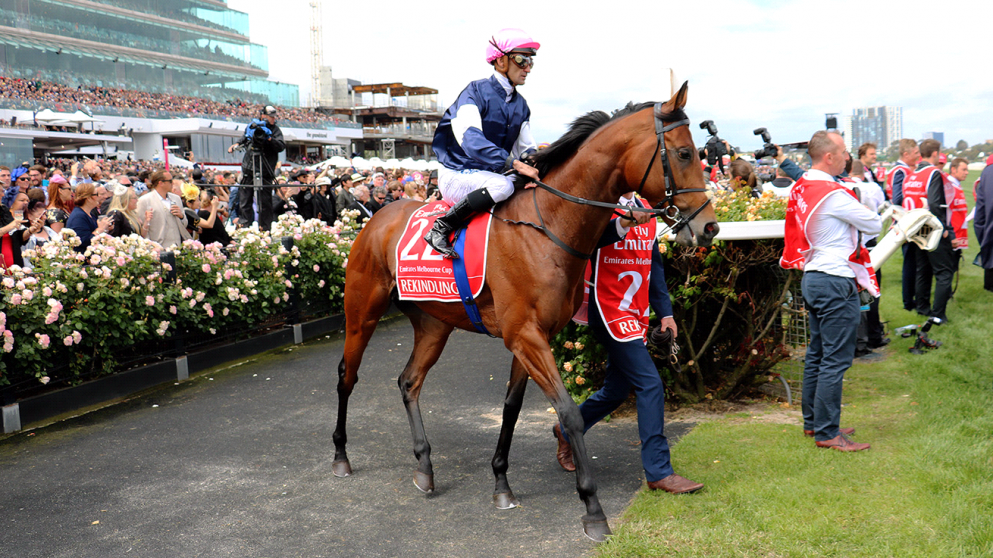 Rekindling won the Melbourne Cup for Ireland and Joseph O'Brien in 2017.

Nick Seddon takes a look at the current picture for the Melbourne Cup, and profiles the five main protagonists for the race that stops a nation…

Northern Hemisphere-bred three-year-olds (four-year-olds in Southern Hemisphere terms) have an excellent recent record in the Melbourne Cup, with Rekindling and Cross Counter obliging in back-to-back years in 2017 and 2018, and Aidan O’Brien will be hoping that trend continues as he bids to win the race for the first time with Tiger Moth. He boasts an unusual profile for such a red hot handicap, and the Australian handicappers have made no secret about the fact that they have found the task of assessing him to be a particularly difficult one - due to the fact that he's made just four starts to date. He has shown some smart form during that time, though, finishing a head behind Santiago in the Irish Derby at the Curragh in June, and picked up a sufficient penalty to earn him a spot in this when winning a Group 3 contest in really good style on his most recent start at Leopardstown in September.

He’s technically untried over further than a mile and a half, but there’s reasons to suspect that he’ll get the Cup’s two-mile trip judged on his pedigree, while he wasn’t stopping at the line when storming home at Leopardstown last month. The booking of multiple Group 1-winning jockey Kerrin McEvoy is a shrewd one by the Coolmore operation, and Tiger Moth looks to have a nice racing weight of 52.5kg for the big race. That’s about 08-03 in European terms, and 12 horses have carried that weight or more to victory this century. Indeed, the omens point to a big run from Tiger Moth, particularly when you note that the Irish raider Media Puzzle carried the exact same weight to victory back in 2002...

European racing fans will already know plenty about the 2019 Epsom Derby favourite Sir Dragonet, and while he never quite lived up to his abundant promise in the Northern Hemisphere while he was with Aidan O'Brien, he's made an excellent start to life in Australia, winning Saturday's Cox Plate at Moonee Valley. That success was Sir Dragonet’s first since striking in the Chester Vase in May 2019, and he certainly became rather frustrating on this side of the world, suffering defeats at short prices on each of his first three outings in 2020. His second behind Magical in the Tattersalls Gold Cup at the Curragh in July was a firm step back in the right direction, however, and he showed plenty of class to surge through to win the Cox Plate at the weekend - a race which has produced seven winners of the Cup to date.

That performance left his frazzled co-trainer Ciaron Maher thanking his non-existent sisters in the aftermath, and you’d imagine that his connections will be quietly confident of a big run at Flemington next month. Sir Dragonet ought to stay the trip judged on his effort to finish fourth in the 2019 St Leger, and he escapes a penalty for his Cox Plate success by virtue of being a weight-for-age winner. That means he will take his chance off 55.5kg (about 08-07), one which isn’t insurmountable considering that four winners this century have carried that weight or higher. He’ll officially count as a ‘home’ winner due to now being Australian-trained, but a victory for Sir Dragonet will certainly add to the growing theory that Europe is slowly taking over Australia’s most famous race.

Unbelievable. Sir Dragonet has won the 100th edition of the #CoxPlate100 for Ciaron Maher and David Eustace. https://t.co/clwk9P2Eav

Surprise Baby is one of the leading home challengers for the Melbourne Cup, and the six-year-old has previous in the race, having finished fifth in last year's renewal - three quarters of a length behind the winner Vow And Declare. Like Tiger Moth this year, he'd had just a handful of starts prior to lining up at Flemington, five to be precise, and he came from an awful long way back to snatch fifth in the closing stages, being nearest at the line. He took his chance off 53.5kg last year, and there's certainly a case to be made that he can put up a similar effort off just 1kg higher this time around, particularly if handed a slightly more attacking ride.

He's been rather lightly-raced once again this year, making just two outings, and having finished second on reappearance in a Group 2 contest at Moonee Valley in September, he could only finish ninth in the Group 1 Turnbull Stakes over a mile and a quarter here last time out. He was only beaten two and a half lengths that day, however, and will appreciate the return to two miles. Stamina looks to very much be his game, and although he'll need to raise his game off revised terms, a slight tweak in tactics could see him go very close indeed for his trainer Paul Preusker - who's yet to win a Group 1 contest.

The bizarrely spelt Verry Elleegant represents Chris Waller, who is perhaps best known on these shores for training the wonder mare Winx. The five-year-old mare is well-travelled, winning nine times from 21 starts, and arrives here on the back of an excellent success in last week's Caulfield Cup. She's untried at anything further than a mile and a half, but has won three times in four starts at the trip, and certainly wasn't stopping when holding off the challenge of Anthony Van Dyck last time out. She's been raised half a kilo to a racing weight of 55.5kg, and while that's certainly within reach as far as the history books are concerned, mares don't have a brilliant record in the Cup.

Indeed, only 13 mares have ever won the race (plus an additional three fillies), but her form certainly does have a strong look to it - finishing second behind the subsequent Champion Stakes winner Addeybb at Rosehill in April. She certainly appeals as a likely type for the Cup, and the retention of jockey Mark Zahra is certainly a good move, considering that they've won back-to-back Group 1 contests together. Ten Caulfield Cup winners have gone on to follow up in the Melbourne Cup, but the feeling is that as likeable as the six-time Group 1 winner Verry Elleegant is, she would likely need a career best effort if she is to take this.

The form of the 2019 Epsom Derby has long been panned as ordinary, and although Anthony Van Dyck largely struggled after his classic win last term, he's very much come into his own this season. Indeed, he began his campaign with an excellent effort to finish second behind Ghaiyyath (who broke the track record) in the Coronation Cup in June, and he built on that by picking up his first success since Epsom when taking the notable scalp of Stradivarius on his third start of the campaign in the Group 2 Prix Foy at Longchamp. Likely plenty in the Melbourne Cup line-up, he's strictly untried over further than a mile and a half, but there's always been a feeling that Anthony Van Dyck would get further if required, and he showed a good mix of speed and stamina when winning from the front in Paris in September.

He hasn't taken long to make an impact since landing in Australia, either, and finished a fine second behind Verry Eleegant in the Caulfield Cup earlier this month, having made his move from further back than the eventual winner. He ran all the way to the line that day, and bearing in mind that he won a key trial for the Prix de l'Arc de Triomphe when defeating Stradivarius last month, it's almost a tip in itself that Aidan O'Brien opted to target this race instead of the Arc. If he is to win this, though, he will have to do so off a top weight of 58.5kg, and it's worth noting that no horse has defied that particular figure since Think Big all the way back in 1975 - though Makybe Diva did successfully carry 58kg to victory when completing a hat-trick of wins in 2005. The Melbourne Cup is one of the few big prizes that still eludes O'Brien (though his son won it three years ago with Rekindling), and it certainly feels like this year's squad is his best chance yet of scooping the prize.