Punchestown Festival Day 3 Tips: Check out the best bets for Thursday at Punchestown 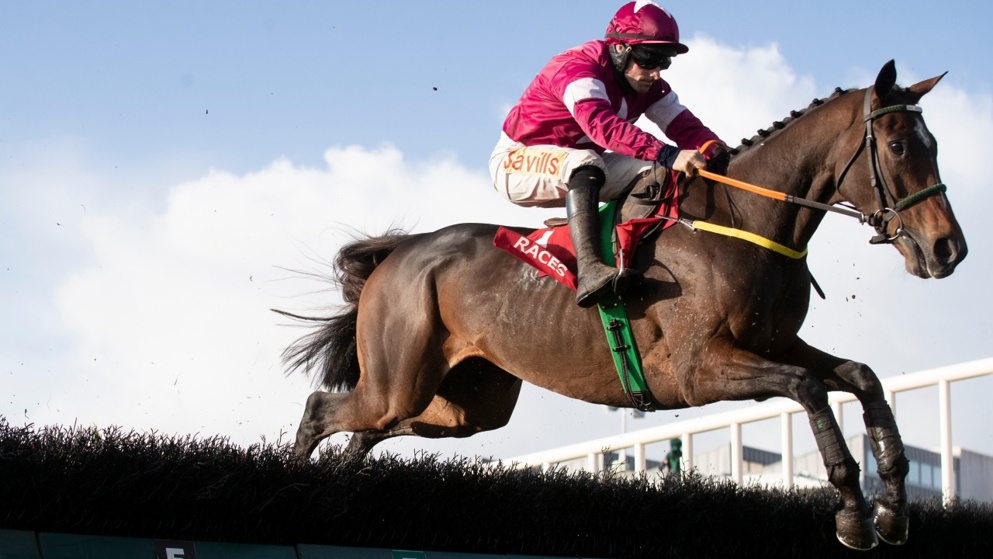 Steve Chambers previews Thursday's racing at the Punchestown Festival, and picks out his best bets for day three of the meeting...

Top notch National Hunt racing continues on day three of the Punchestown Festival, and it's time for the likes of Flooring Porter and Energumene to strut their stuff, but we are veering away from the pair of those equine stars, and looking elsewhere for our best bets on Thursday.

Gavin Cromwell's Flooring Porter was a mightily-impressive lead-all-the-way winner of the Stayers' Hurdle at the Cheltenham Festival, and the ultra-progressive staying hurdler, who has ventured through the handicap sphere to be a classy Grade 1 performer sets the standard in the Champion Stayers Hurdle at 17:25 on Thursday.

However, he was given a soft lead for most of that Cheltenham contest and he may not get that here with the Paul Hennessy-trained Pertemps Final winner Heaven Help Us likely to be on the speed from the flag fall. While the ceiling hasn't been reached yet with Flooring Porter's capabilities, he's awfully short for a race jam-packed with classy stayers, and he could well prove vulnerable to a closer in the final few furlongs.

Noel Meade unleashes a dual-pronged attack at this contest with BEACON EDGE and Diol Ker lining up, and it's the former that makes most appeal, as he performed with real credit in the Stayers' Hurdle when finishing fourth at his first try over three miles. Prior to that Cheltenham contest, the seven-year-old beat Fury Road in the Grade 2 Boyne Hurdle over 2m 5f, and if he can continue on an upward curve could be a notable thorn in the favourite's side.

He has winning form at Punchestown and is a real model of consistency, as he's yet to finish out of the top four in his career, so if Beacon Edge can stalk Flooring Porter for most of the contest, then he could well strike late under a patient ride from Sean Flanagan, and the Gigginstown House Stud-owned raider can claim Grade 1 glory.

There's a fiercely competitive three-mile handicap hurdle at 18:00 and the likes of Max Flamingo, Capodanno and Lynwood Gold should prove to be major players in what is set to be a devilishly difficult betting heat for punters to work out, but there could be some eye-catching value further down the betting.

The one that catches the eye is the Denise Foster-trained Ragnar Lodbrok, who should offer some hugely attractive each-way value, and with some bookmakers offering six places in the each-way betting, then he looks a cracking bet for this fascinating Conway Piling Handicap Hurdle.

The six-year-old won his maiden hurdle at Galway before running creditably in a brace of Cork contests. He was then handed his stiffest test to date as he locked horns with Bob Olinger in the Lawlor's of Naas Novice Hurdle in January, and he was no match for the emphatic Cheltenham Festival winner, as he could only finish fifth.

Showing promise next time out when second at Navan, Ragnar Lodbrok's last outing was at Fairyhouse, where he finished sixth in a competitive event. He lines up off the same mark on Thursday evening and while he needs to improve, he showed he relishes the hustle and bustle of a big-runner field, and looks to have the potential to spring a shock off a mark of 128.

There may only be seven runners in the Close Brothers Mares Novice Hurdle at 19:05, but there's some exceptional young talent lining up and the market is headed by Magic Daze, who was a fine second to Telmesomethinggirl in the Mares' Novices' Hurdle at the Cheltenham Festival. Henry de Bromhead's five-year-old hasn't been seen since that outing, and while she has to come into calculations, she could be beaten by a more progressive rival.

The likes of Gauloise and Hook Up take their chance for Willie Mullins, while the Closutton handler's charge is boosted by The West Awaits and all three are major players, if producing their best form, and it's the former that makes most appeal.

However, the one to go with here is the Denise Foster Bigbadandbeautiful, who was a very useful bumper performer, who tasted Listed success on the level, and showed her class over timber last time out when winning a maiden hurdle at Navan last month in emphatic style. She may have only won by just over a length, but she was ridden out for a comfortable victory, and there could be a whole lot more to come over hurdles.

There's no doubt she will need to improve if she is to down the likes of Magic Daze and Gauloise, but while those rivals have had hard races in recent weeks, Bigbadandbeautiful should line up fairly fresh, and if she can continue to blossom over obstacles then can stride to glory here.

#AD Minimum deposit of £10 using deposit code 30F - A qualifying bet is a ‘real money’ stake of at least £10 placed on any sports market - Minimum odds of 1/2 (1.5) - Free bets credited upon qualifying bet settlement and expire after 7 days - Free bet stakes not included in returns - Casino Bonus must be claimed within 7 days • To withdraw bonus/related wins, wager bonus amount x40 within 14 days • Wagering req. vary by game • Withdrawal restrictions and Full T&C’s apply. 18+ begambleaware.org
get offer
Bet £10 Get £30 In Free Bets
#AD 18+. Play Safe. New customers using Promo code H30 only, Min £10/€10 stake,  min odds 1/2, free bets paid as 2 x £15/€15, free bets credited after  settlement of first qualifying bet, free bets will expire 30 days after  the qualifying bet is placed, payment method/player/country restrictions apply.
Welcome Offer
#AD Bet £10 & Get £50 in Free Bets for new customers at bet365. Min deposit requirement. Free Bets are paid as Bet Credits and are available for use upon settlement of bets to value of qualifying deposit. Min odds, bet and payment method exclusions apply. Returns exclude Bet Credits stake. Time limits and T&Cs apply.
Bet £10 Get £20 In Free Bets
#AD Min stake £10. Min odds 1/2 (1.5). First bet only. Free bets expire in 7 days. Cashed out bets won’t apply. Payment method restrictions. Online UK customers only. 30 days to qualify for £20 in Free Bets. 18+. T&Cs apply
Bet £10 Get £40 In Bonuses
#AD 18+ New customers only. Opt in and place a £10 bet on Horse Racing at odds of 2.00+ within 7 days of opening a new account; excludes cashed out bets. Receive 3x £10 Horse Racing Free Bets, valid on set events only at odds 2.00+. Plus, a £10 Slot Bonus, selected games, wager 20x to withdraw a max of £250. Bonuses expire in 7 days. Card payments only. T&Cs Apply. Please Gamble Responsibly.
Bet £10 Get £60 in Bonuses
#AD New UK customers only. Register using the promo code BETFRED60, deposit and place first bet of £10+ on Sports (cumulative Evens+) within 7 days of registration. First bet must be on Sports. £20 in Free Bets to be used on Sports, £10 in Free Bets to be used on Lotto and 50 Free Spins (20p per spin) credited within 48 hours of bet settlement. Further £20 in Free Bets credited 5 days after settlement. Bonuses have a 7-day expiry. Payment restrictions apply. SMS verification and/or Proof of I.D and address may be required. Full T&Cs apply.
Bet £20 & Get It Back As CASH If It Loses
#AD New customers only. Place your FIRST bet on any Horse Racing market and if it loses we will refund your stake in CASH. Max refund for this offer is £20. Only deposits made using cards will qualify for this promotion. T&Cs apply.
Get Up To £100 In Free Bets
#AD New customer offer. Place 5 x £10 or more bets to receive £20 in free bets. Repeat up to 5 times to receive maximum £100 bonus. Min odds 1/2 (1.5). Exchange bets excluded. Payment restrictions apply. T&Cs apply.
Money Back As CASH Up To £20 (APP Only)
#AD 18+ Playsafe. New UK users only. The cash refund will equal the amount of your first deposit up to £20. Payment restrictions & T&Cs apply. 18+ begambleaware.org
Bet £10 Get £20 In Free Bets
#AD. New members. £10 min deposit & bet on sportsbook, placed & settled at 1.5 min odds within 14 days of sign-up. Win part of E/W bets. 2 non-withdrawable £10 Free Bet Tokens: accept in 7 days, valid for 7 days from acceptance (ex. E/Ws & Multiples), stakes not returned. Click here for Rules & Exclusions. Bet Responsibly. BeGambleAware.org. 18+
£25 Free Bet + 10 Free Spins
If your account has Sportsbook losses at the end of your first day's betting, QuinnBet will refund 50% of your losses as a Free Bet up to £25 (min 3 bets) Plus 10 Free Spins on Asgard Warriors. Even if your account is up, you're guaranteed a £5 Free Bet Plus 10 Free Spins provided you place at least 1 bet of £10 or greater at the minimum odds. T&Cs apply | 18+ New UK Customers Only | BeGambleAware.org
£10 Welcome Offer
#AD UK & ROI customers only. 18+. Place your first bet on sports pools and if it loses we’ll refund your stake in cash. Max refund is £10. Qualifying bet is the first sports pool bet added to the betslip. Ten to Follow bets do not qualify. Totewin will be the qualifying bet when a Totewin and a Toteplace bet are struck at the same time. BeGambleaware.org T&Cs apply
Latest racing results
Wolverhampton
19:45
Full Result
1st You're Cool
4/1
2nd Amazing Amaya
11/1
3rd Qaaraat
7/1
Dundalk
19:30
Full Result
1st Teddy Boy
17/2
2nd Noirvento
8/1
3rd Pandemic Princess
13/2
Wolverhampton
19:15
Full Result
1st Tadleel
15/8 F
2nd Eilean Dubh
100/30
3rd Golden Force
100/30
View All Today's Results