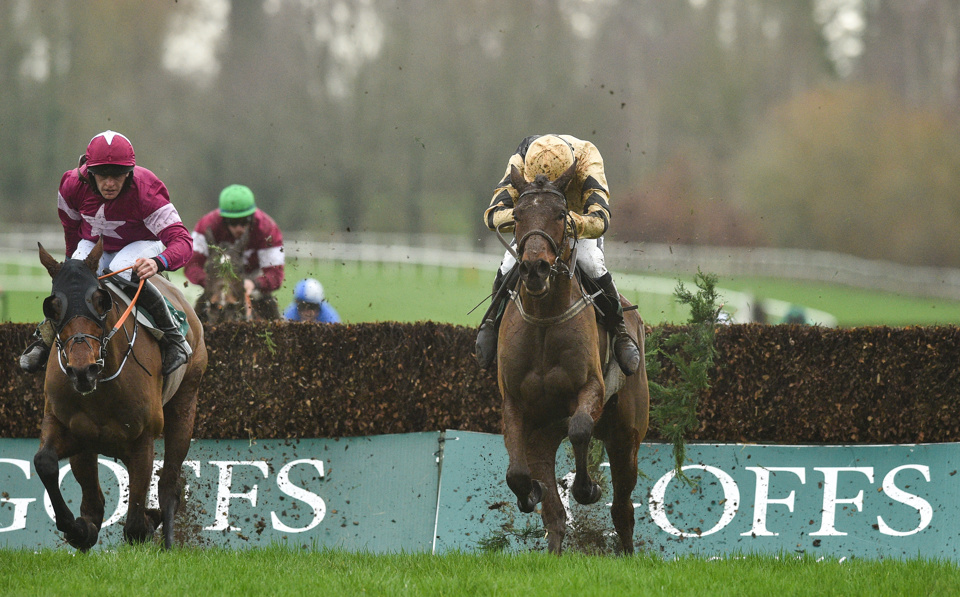 Today's tips come on the other side of the Irish Sea at Gowran Park, where it's Thyestes Chase day...

1. Will Brouder's decision be rewarded?

It's the big day in the calendar at County Kilkenny's historic and much loved Gowran Park, the track hosting the big money Thyestes Chase as well as six supporting races. The first of those gets underway at 12.45, with a field of 13 for a tricky looking handicap hurdle. Popular conditional jockey Kevin Brouder will have faced a tricky decision here, forced to choose between two horses upon whom he was successful last time out, Our Roxane and Knockraha Boss. The fact he goes for the mare Our Roxane, an easy winner at Limerick for Brouder just 27 days ago, might be a bit of a tip in itself.

It's female riders only in the 13.20 Gowran Park, a two and a half mile maiden hurdle which could do something to improve the spirits of Meath trainer Noel Meade. His stable was left reeling at the news of injury to star inmate Road To Respect yesterday, but perhaps Fairyhouse bumper winner Henry Brown can give him something to smile about by running well in this. Ridden now by Maxine O'Sullivan, the five year old starts out over hurdles having scored by an easy two and a half lengths on his rules debut.

3. We've got a humdinger in the Galmoy

The 13.50 at Gowran Park is a cracker. Won for the last two years by the mighty Presenting Percy, the three mile Grade 2 Galmoy Hurdle looks every inch up to scratch this time around, featuring a heavyweight clash between two superstar mares, Benie Des Dieux and Apple's Jade. Unbeaten in Britain and Ireland when completing, the Willie Mullins-trained Benie Des Dieux is a four time Grade 1 winner, but she'll need to be at her best to repel the challenge of her key market rival, 11-time Grade 1 scorer Apple's Jade, the Gordon-Elliott-trained eight year old who roared back to something near her best when easily taking the Frank Ward Memorial Hurdle at Leopardstown's Christmas fixture.

APPLE'S JADE left two disappointing runs behind her when blitzing the field to take the Grade 1 Frank Ward Memorial Hurdle by a whopping 17 lengths at Leopardstown. Gordon Elliott's star mare arguably needs a trip to be seen at her best these days and this assignment looks perfect to quash any doubters who may think her best days are behind her. If it wasn't for a famous last-hurdle fall at Cheltenham in March, Benie Des Dieux would be unbeaten in eight starts for Willie Mullins and she is of real interest on her first outing of the season. Stablemate Penhill is likely to get better with every run as he works his way back to his Grade 1-winning best.

4. Abraham can go in again

One of the easiest winners of the season when getting the job done on his stable debut for Martin Brassil at Naas 18 days ago, eight-year-old gelding Abraham bids to follow up in the 14.25 Gowran Park. The assessor slapped him with a rise of 12 lb for that facile victory, but this son of Hernando could still be leniently treated on a mark of 116.

5. Acapella can be in tune in the big one

Race of the day! Worth €59,000 to the winner, the 15.00 Gowran Park is the prestigious Thyestes Handicap Chase, an 18-runner staying shootout over three miles and a furlong. Willie Mullins has bagged the prize seven times previously and fields a weighty squad of seven, chief among them Acapella Bourgeois. The 10-year-old, not that long ago talked of as possible Gold Cup material, bounced back to form with a very good run at Tramore on new year's day. For anyone looking for one at a much bigger price, Gordon Elliott runs up to seven, one of whom is Dounikos, the horse who won Punchestown's recognised Grand National Trial in 2019 and went on to run well for a long way in the big one at Aintree.