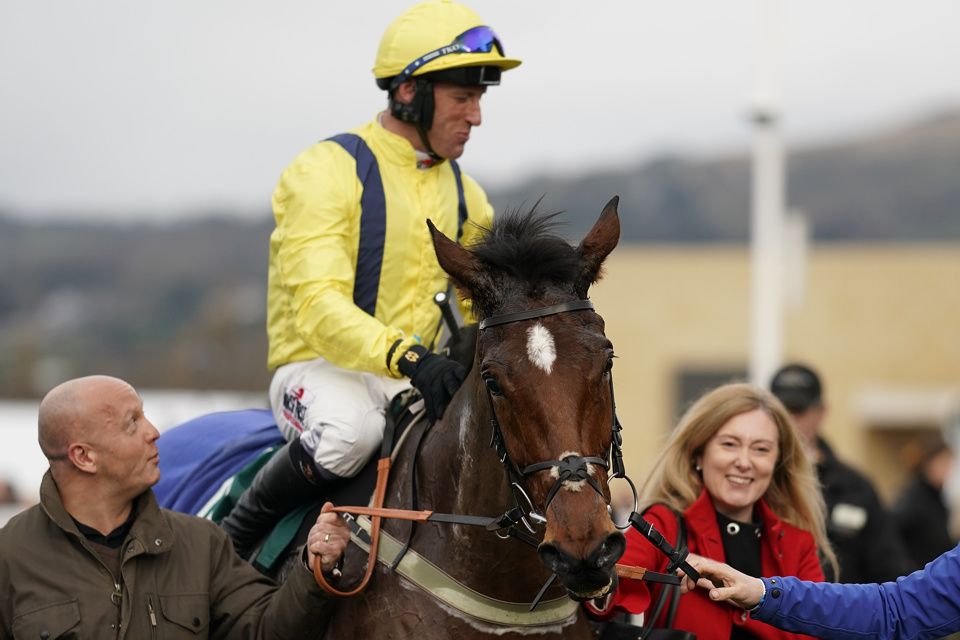 Steve Chambers takes a look at Saturday's televised action at Ascot, Haydock and Huntingdon, and picks out his best bets...

This weekend's ITV7 kicks off with a hugely competitive handicap hurdle at Haydock Park at 13:50, and it's the Jonjo O'Neill-trained Arrivederci that looks an improving sort that can continue his fine winning run and kick off the live terrestrial action with a victory. The five-year-old broke his hurdling duck in January winning a Wincanton maiden hurdle, and then followed that up with a taking success at Wetherby last month. Pulling comfortably clear of his rivals in that handicap contest, Arrivederci shaped like there's a lot more to come over timber this season, and can defy a significant rise in the weights. Upped 8 lb for that Wetherby success, the Jackdaws Castle inmate was pulling well clear in that event in October, so if he can continue to blossom over obstacles then can continue his winning run and land his third win on the bounce.

We swiftly move to Huntingdon for the second race in the ITV7, and yet again punters will need to decipher a trappy handicap hurdle, but it's the Dr Richard Newland-trained Orchestral Rain that can continue his winning ways and help us past leg two with a winner. Three-year-old Orchestral Rain may be in the early stages of his National Hunt career, but the youngster has made a serene start to the jumping game and will be looking to follow up recent wins at Huntingdon and Ludlow. Last seen winning a juvenile contest at Huntingdon by ten lengths, Orchestral Rain will venture into handicap company on Saturday and appears to have been handed his toughest test to date. Handed a mark of 121, Orchestral Rain will come up against some experienced rivals, but he could be the one with most potential and the Born To Sea gelding can storm to victory off a low weight.

It doesn't get any easier for punters in race three of the ITV7, as the hugely competitive Stayers' Handicap Hurdle comes up next at Haydock at 14:25 with the Irish raider The Jam Man heading the latest betting. The recent Troytown Chase winner will return to the hurdling game in this contest and has to be respected at the head of the betting. However, it's the Olly Murphy-trained Collooney that catches the eye as the six-year-old son of Yeats aims to build on a comfortable win at Fontwell in October. He shaped like a step up in trip would bring more improvement, and the JP McManus-owned raider will tackle three miles for the first time on Saturday. Handed a 5 lb rise for that recent win, Collooney will need a career best, but off a fast-run contest at Haydock, the improving gelding can strike gold in what should be a thrilling event.

We veer to calmer waters in the fourth race of the ITV7 and are handed the task of finding the winner of the Grade 1 Betfair Chase at Haydock Park at 15:00. A field of five are set for the premier Cheltenham Gold Cup trial, and while the number of declared runners may disappoint some, of the quintet there could be some notable Gold Cup clues as last year's Gold Cup third Lostintranslation will line up. Colin Tizzard's star will lock horns with dual Betfair Chase winner Bristol De Mai and dual King George VI Chase winner on Saturday, but the 2019 Betfair Chase winner, Lostintranslation, can duly retain his crown and boost his claims for the Gold Cup. A real class act, Lostintranslation could still be open to some improvement over the larger obstacles this season, and with Bristol De Mai having seen better days at the top level, and with Clan Des Obeaux more likely to figure more prominently in the King George then Tizzard's stable star can bound to a fine win.

It's over to Ascot for a trappy 2m 167y contest at 15:17 and Paul Nicholls will unleash a dual-pronged attack in the shape of the top-weighted Magic Saint, who heads into the race on the back of a fine win at Cheltenham and Capeland, who is bidding for a second win in the race. While Magic Saints warrants the utmost respect having shown to be in great form with a win at Cheltenham, he has been handed a 7 lb rise for that success, so may struggle to follow up. On the contrary, Capeland has slipped down the ratings slightly in recent months, but was a faller last time out at Ascot, so will need to jump better here. He is a 7 lb higher in this race in 2020 having won off a mark of 143 last year, but he has the potential to sparkle off of 150 and with cheekpieces the Ditcheat second string can prevail.

The penultimate race in the ITV7 sees us return to Haydock for their final race of the day, the My Odds Boost On Betfair Stayers' Handicap Chase, which is off at 15:35. Another hugely competitive betting heat sees a plethora of contenders in with a chance of claiming victory, but Midnight Tune can defy top weight for Anthony Honeyball, whose horses have been running superbly of late. Pulled up last time out at Uttoxeter, Midnight Tune was given an aggressive ride that day and struggled to see out the trip, but he had previously won at Warwick in February and if he can recapture that form on his first run of the season then he can prove to be a cut above his rivals and storm to a gutsy win over the marathon trip of 3m 4f 97y.

We end proceedings on the level with an intriguing National Hunt Flat race at Ascot at 15:50 and all eyes will be on the Paul Nicholls-trained newcomer Kandoo Kid, who will be making his racecourse debut and currently sits at the head of the betting, at the time of writing. Taking on the Nicky Henderson-trained newcomer Wraysford, Kandoo Kid will have to be a smart performer to land this prize, and the betting in the hours up to the race could aid punters' chances of seeing who is a potentially smart contender. The son of Kapgarde is closely related to Champion Chase hero Politologue, so if he can turn into a horse of that quality then he will be an exciting recruit for the Nicholls team, who can round off the ITV7 with a win.