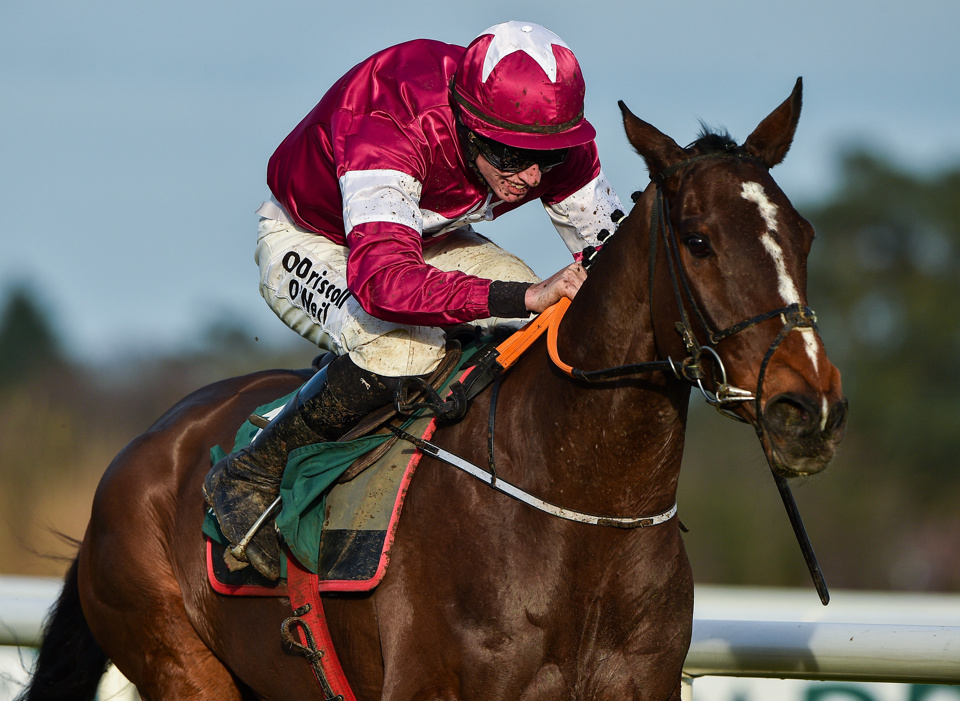 Supreme favourite Abacadabras is entered at Punchestown on Sunday

Gordon Elliott's star novice hurdler Abacadabras, who is ante-post favourite for the Supreme Novices' Hurdle at the Cheltenham Festival, features among a stellar list of 12 horses entered for Sunday's Grade 2 Moscow Flyer Novice Hurdle at Punchestown.

Fourth behind Envoi Allen in the Champion Bumper last season, the six-year-old has blossomed since switching to the hurdling sphere this campaign, and his victory in the Grade 1 Future Champions Novice Hurdle at Punchestown over the festive period forced the bookmakers to slash him to clear favourite for the Supreme Novices' Hurdle.

Three wins in his four outings this season - with his only defeat coming at the hands of Envoi Allen in the Royal Bond Novice Hurdle in December - Abacadabras has been mightily impressive over timber, and Sunday's race could be the next step on his impressive campaign.

A race won in previous years by the likes of Vautour and Douvan, who both went on to land Supreme glory, it's no surprise to see a stellar list of entries, and the highly-touted Andy Dufresne will add more depth to the Elliott team, as he could drop back to two miles after a shock defeat in the two and a half mile Navan Novice Hurdle.

Easywork is another eye-catching entry for Elliott's imperious operation and the six-year-old Gigginstown House Stud-owned charge could be aiming to record a fourth win on the spin over hurdles this season. Last seen winning over two and a half miles at Limerick on Boxing Day, Easywork will step into Graded company for the first time, but has shaped like he could easily produce the goods in higher class races.

Willie Mullins has won this race seven times since 2009 and the master of Closutton could unleash a three-pronged attack in the shape of Blackbow, Janidil and Tiger Tap Tap. The former, who was fifth in the 2018 Champion Bumper at the Cheltenham Festival, has struggled to deliver over obstacles this season, and was a faller last time out, but has to be respected, while Janidil will step out of handicap company having won three races on the spin, and will be a respected contender, with Tiger Tap Tap completing the Mullins triumvirate fresh from a win at Naas.

Joseph O'Brien's pair of entries are Anything Will Do, who is seeking a fourth win on the bounce, while Meticulous completes his duo, while the Henry de Bromhead-trained Captain Guinness is another notable entry in a race that could throw up a host of Cheltenham Festival clues.

#AD New customers on mobile only. Stake min amount of £19 (odds 1.8 or greater) on any sporting event. Promotion available between 14/11/22 - 01/12/22. Max 4 x £10, 4 x £5, 1x £6 Free Bets credited on qualifying bet settlement on selected events. 1x claim per customer. Void, cashed out, partially cashed-out bets do not qualify. Each Way bets, system bets, and profit boosts are not permitted for qualifying bet. Free bets expire after 7 days of qualifying bet settlement. T&C’s Apply
get offer
Double the odds, any sport, any bet, any odds!
#AD 18+ begambleaware.org Only valid for new registrations to Grosvenor Existing members do not qualify, Bet must be placed using real money in combination with the Odds Boost Token, Offer applies to Sport bets only. Max stake is £10. Each way bets are a maximum of £5 each way (£10 total). Customers have 60 days after registration to use the Odds Boost token. T&Cs apply.
Bet £20 & Get it Back As CASH If It Loses
#AD New customers only. Place your FIRST bet on any Horse Racing market and if it loses we will refund your stake in CASH. Max refund for this offer is £20. Only deposits made using cards will qualify for this promotion. T&Cs apply.
Welcome Offer
#AD Bet £10 & Get £50 in Free Bets for new customers at bet365. Min deposit requirement. Free Bets are paid as Bet Credits and are available for use upon settlement of bets to value of qualifying deposit. Min odds, bet and payment method exclusions apply. Returns exclude Bet Credits stake. Time limits and T&Cs apply. The bonus code SPTS365 can be used during registration, but does not change the offer amount in any way.
Bet £10 Get £30 In Free Bets
#AD 18+. Play Safe. New customers using Promo code R30 only, Min £10/€10 stake,  min odds 1/2, free bets paid as 3 x £10/€10, free bets credited after settlement of first qualifying bet, free bets will expire 30 days after the qualifying bet is placed, payment method/player/country restrictions apply.
Bet £10 & Get £35 In Free Bets + £10 Multiple
#AD 18+ begambleaware.org. Place a £10 bet on Horse racing at min. odds 1/5 (1.2) — get £35 in free bets + £10 free Horse Racing Multiples Bet. Only deposits via cards will qualify, Apple pay not valid on this promotion. T&Cs apply.
Bet £10 Get £10 + £10 Casino Bonus
#AD New UK customers (Excluding NI) mobile only. £20 in FREE Bets (FB) as £10 in sports bets & a £10 casino bonus (CB). Min stake £10. Min odds Evs. FB applied on 1st settlement of any qualifying bet. FB 7 day expiry. 1 FB offer per customer, household & IP address only. Payment restrictions. 14 days to accept £10 CB, then active for 3 days. CB 5x wagering & max redeemable £100. Game restrictions apply. Cashed out/Free Bets won’t apply. 30 days to qualify. 18+.  T&Cs apply
Bet £10 Get £60 in Bonuses
#AD New UK customers only. Register using the promo code BETFRED60, deposit and place first bet of £10+ on Sports (cumulative Evens+) within 7 days of registration. First bet must be on Sports. £20 in Free Bets to be used on Sports, £10 in Free Bets to be used on Lotto and 50 Free Spins (20p per spin) credited within 48 hours of bet settlement. Further £20 in Free Bets credited 5 days after settlement. Bonuses have a 7-day expiry. Payment restrictions apply. SMS verification and/or Proof of I.D and address may be required. Full T&Cs apply.
Bet £10 Get £30 Free Bets (APP Only)
#AD New UK, IE & Malta customers only. 18+. Min £10/€10 first deposit using Debit Card or Trustly. Place a bet of £10 at min odds of 1.5. Free bets expire in 90 days. Full T&Cs apply.
Bet £10 Get £30 Free Bets + £10 Casino Bonus
#AD Minimum deposit of £10 using deposit code 30F - A qualifying bet is a ‘real money’ stake of at least £10 placed on any sports market - Minimum odds of 1/2 (1.5) - Free bets credited upon qualifying bet settlement and expire after 7 days - Free bet stakes not included in returns - Casino Bonus must be claimed within 7 days • To withdraw bonus/related wins, wager bonus amount x40 within 14 days • Wagering req. vary by game • Withdrawal restrictions and Full T&C’s apply. 18+ begambleaware.org
Bet £10 Get £30 Free Bets
#AD Offer includes a free £1 Race Index spread bet to try out our exciting 50-25-10 race markets. Place a £10 fixed odds bet at minimum odds of 1/2. Get 2 x £10 free fixed odds bets + 2 x £5 free Winning Favourites spread bets. Bet with live streaming on all racing and greyhounds! Ts&Cs Apply. 18+ begambleaware.org
£35 Free Bet + 10 Free Spins
If your account has Sportsbook losses at the end of your first day's betting, QuinnBet will refund 50% of your losses as a Free Bet up to £35 (min 3 bets) Plus 10 Free Spins. Even if your account is up, you're guaranteed a £5 Free Bet Plus 10 Free Spins provided you place at least 1 bet of £10 or greater at the minimum odds. T&Cs apply | 18+ New UK Customers Only | BeGambleAware.org
50% Up To £50 Welcome Bonus
#AD 18+ begambleaware.org; New bettors get 50% of deposit up to £50; Once per household; Min deposit £15 (no Skrill/Neteller); Wager a total of 8 times deposit + bonus, with max qualifying bet stake equal to your initial bonus amount; Bonus expires after 60 days; Min odds of 4/5 on singles, or 2/5 per leg for acca; Some bet types excluded; See full terms.
Latest racing results
Wolverhampton
16:20
Full Result
1stGincident
4/1
2ndKlimova
17/2
3rdEmperor Zen
13/2
Bangor
15:48
Full Result
1stSole Solution
5/2
2ndBlue Fin
6/4F
3rdWay Out
5/2
Newbury
15:40
Full Result
1stAmarillo Sky
11/8F
2ndOnly Money
5/2
3rdMonsieur Lecoq
10/1
View All Today's Results