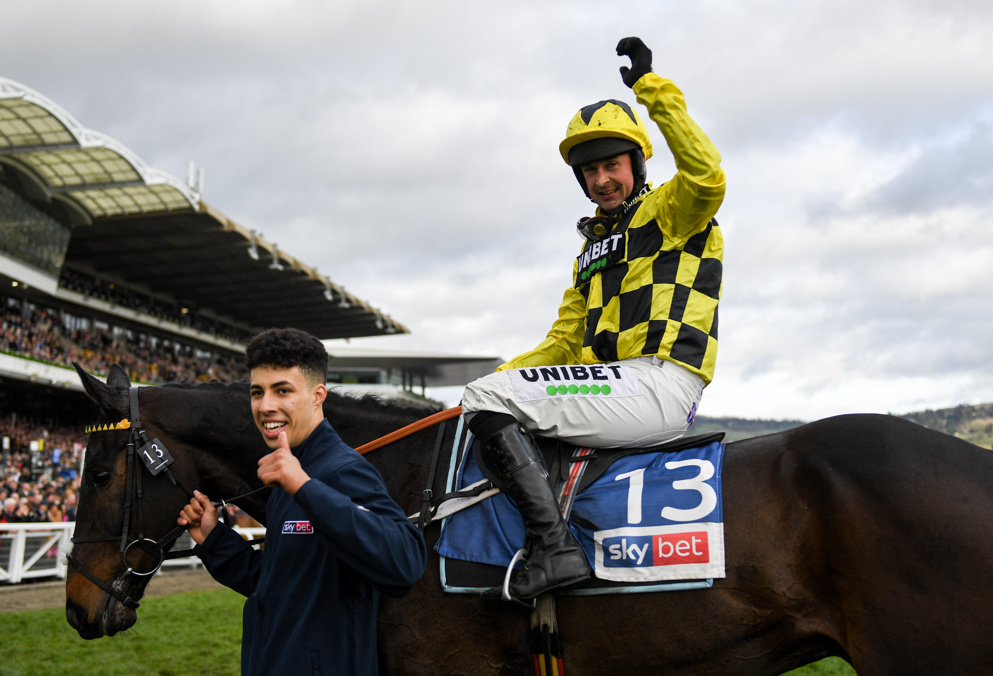 Shishkin (far side) defeated Abacadabras in a thrilling photo finish to win the Supreme Novices' Hurdle.

Shishkin defied a late market drift to get Nicky Henderson’s Cheltenham Festival off to a flying start by sealing a pulsating success in the Supreme Novices’ Hurdle.

The six-year-old was the ante-post favourite coming into the Festival, but the soft conditions saw him drift markedly in the hours leading up to the race, with the fellow Joe Donnelly-owned Asterion Forlonge being sent off the 9/4 favourite.

However, the market leader jumped markedly right throughout, and under a cool ride from Nico De Boinville, Shishkin made steady progress before holding off the attentions of Irish raider Abacadabras to prevail in a photo finish - and seal a fourth win in the Festival curtain-raiser for his handler.

The race wasn’t without drama, either, and the wayward jumping of Asterion Forlonge caused trouble at the third flight from home, when the favourite hampered and unseated Elixir D’ainay, who subsequently brought down Rachael Blackmore’s mount, Captain Guinness.

It proved to be the perfect start for Henderson, however, who also saddled the third-placed Chantry House, and he was relieved that his two jockeys were able to avoid the mid-race drama.

“It was no fault of Nico's - he has given the horse a wonderful ride and has done well to get out of there. I think we know he is pretty cool round here.”

“We have a lot to look forward to. They have won point-to-points and I would think chasing is where we will go.”

The success meant that Henderson equalled Willie Mullins in becoming the joint most successful trainer at the Cheltenham Festival, with 65 winners apiece at the time of writing, though it hasn’t all been plain sailing for the Seven Barrows handler, with stable star Altior ruled out of tomorrow’s Queen Mother Champion Chase.

"We say it every year that something will come up and bite you, and sadly it was Altior that has had to stay at home,” he said. “He is one of the more powerful shots (we have), but this was great and all of our horses have run well."