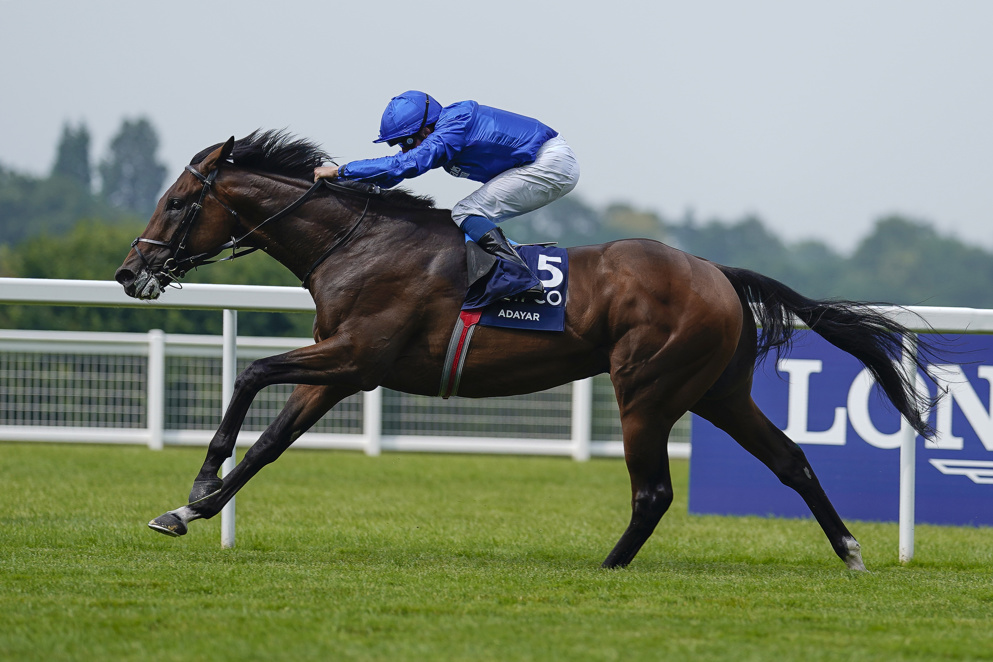 Adayar is lining up in Saturday's Champion Stakes.

Seeing as it’s Ascot Champions Day tomorrow I’ve taken the unprecedented decision to go through every race, mostly through pure excitement for the day we have in store.

There’s a solid case to be made for the first few in the betting here but The Mediterranean has huge potential at this trip despite running a little flat last time out over it. The St Leger place was a huge performance especially as he was the outsider of the Ballydoyle four and came from a fair way back to be beaten four lengths by Hurricane Lane, he galloped on strongly that day and looked every inch like this sort of race would be perfect down the line. Aidan O’Brien has won this race a few times including twice in the last four years and has The Mediterranean as his sole representative which is always interesting. Little flat last time out but kept on gamely on first attempt over the trip finishing behind Search For A Song who finished second in this race last year and who herself is a multi group one winner.

Art Power is a short enough price for this for a reason with form figures of 143 on previous visits here with the last two efforts in group one events. Put it all together last time out at the Curragh when easily winning a group three but he’s had plenty of excuses at the top level and has still been ultra consistent. Went off to hard at Haydock and still stuck on well, wasn’t helped by the draw and the drop back to five furlongs at Goodwood, drawn the wrong side and had only one other horse to race with at Newmarket and same again when winning his group last time here but the others in the centre edged him. Deserved a group one win after all that and has all the ability to land this and even if things don’t go his way, he’s shown he will still be bang there at the finish.

Snowfall is the solid favourite for this and for good reason. There’s every chance she easily scoots away with it after a superb season and back against her own sex but there’s another Ballydoyle entry that catches the eye as an each-way selection. La Joconde has already finished third in two group ones lately. Setting the pace and being allowed to gallop on has seen her at her best and last time out hold up tactics were a write off. Pacemaker for Snowfall on both previous group one thirds, finishing only half a length behind her last time, she’s hugely over priced to fill a similar position again or even go one better should the season have taken a toll on the favourite. Hollie Doyle gets a good tune out of her and is the ideal booking.

Alcohol Free didn’t appear to stay last time out at York and won the Coronation stakes group one on only previous Ascot run. More impressive since when beaten caught late in the Falmouth when forced to lead and racing on the unfavored far rail and won a group one at Goodwood beating Poetic Flare when showing a impressive turn of foot to put the race to bed. Has everything in his favour here today and Oisin Murphy in the saddle at this crucial time is a huge positive. Palace Pier tasted his only career defeat in this race last year and Baaeed while unbeaten has more to prove having only made his debut in June

Adayar would be my idea of the winner on known form but there’s bits of form that give Mac Swiney a shout at a big each way price. Group one winner back in May when beaten stable mate Poetic Flare in the Irish Guineas and finished fourth in the Derby behind Adayar when looking like the trio beat him late on. Proved the trip was an issue at the Curragh when looking a big danger to emptying. Ran a big race from the front in the Juddmonte but ideally needs a bit of juice in the group and has it tomorrow here for the first time since the Derby. Form with at least soft in the description reads 511114 and with trip to suit there’s likely a big performance on the cards.

That man Oisin Murphy again looking to win the jockey championship on a course specialist in Sir Busker. Fourth in the group one Queen Elizabeth on this card last year when coming down the near rail on his own was extremely eye catching. Ran consistently well this season once again and has had excuses to not go closer again in those good races and drops in to a handicap for the first time in over a year for this at a track where his firm figures read 1433, the last three at listed and group one level, the two group one thirds on ground a little fast for him also makes it more eye catching. Top weight but only ten pound between top weight and bottom and proven group performer is well worth a punt at a monster each way price.