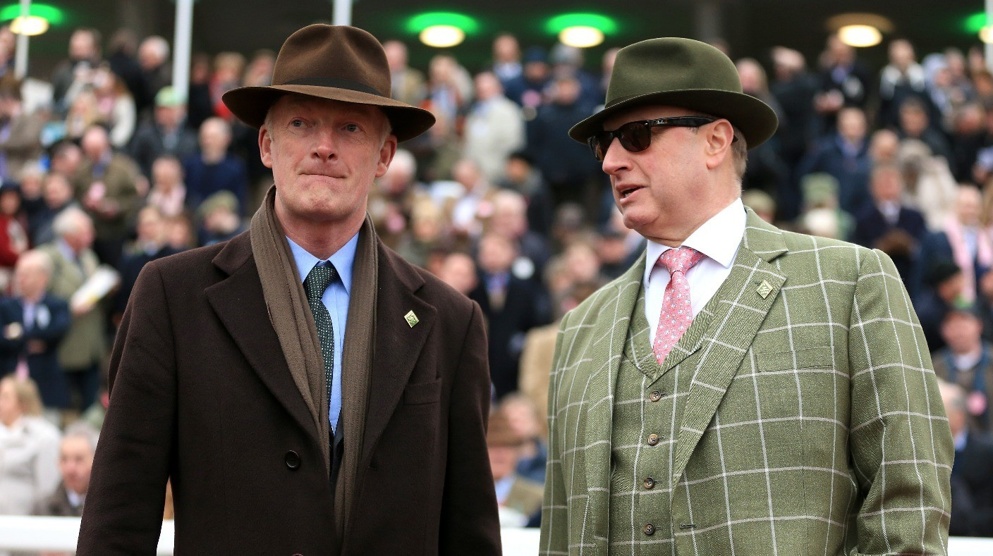 Rich Ricci and Willie Mullins will be hoping that N'Golo can develop into a Cheltenham Festival contender.

Nick Seddon reviews the weekend’s Jumps action, and along with picking out three eye-catchers to note, he's advising a 33/1 bet for next year's Cheltenham Festival…

While Kelso's meeting on Saturday may have been a good way down the pecking order as far as punters were concerned, the Scottish track hosted an intriguing eight-race card, and Erne River certainly showed plenty to work on when third on hurdling debut in the opener - a novice contest over two and three quarter miles. The seven-strong field was an interesting one, featuring two established staying chasers in Aloomomo (winner) and Lord Du Mesnil (fourth), and with the latter proving particularly popular in the market, Erne River was sent off as a 22/1 outsider for his small yard.

He does have a useful Jumps pedigree, though, being closely related to a couple of winners in this sphere, and he shaped well on the front end under Charlie Hammond. Leading until approaching the last, Erne River showed a good attitude to respond to his rider's urgings, and although he was ultimately well held in the end, he ran all the way to the line in an attritional affair. He's unlikely to be a world beater, but the way he was able to mix it with some useful types on his first outing bodes well for the future, and it would be a surprise if his connections can't find him a winnable novices' event or two this term - perhaps back at two and a half miles.

An emotional victory following the sad passing of part-owner Ray Green's wife Anita yesterday - our thoughts are with Ray & his family https://t.co/vGQQfLoidK

Jared Sullivan's decision to switch his horses to the UK is something which has added plenty of intrigue to the beginning of the new season, and Getareason was the latest of his string to make his debut for the Paul Nicholls team at Sandown on Sunday afternoon. A smart novice over timber, Getareason was last seen disappointing on chasing debut on his final start for Willie Mullins at Naas in November 2019, but he showed plenty to work on here on handicap debut over the larger obstacles.

Starting life in this sphere off a mark of 137, Getareason travelled smoothly into the race, jumping well throughout, and he still looked to have plenty to offer when trapped in a pocket at a crucial stage at two from home. He was slightly tapped for toe thereafter, producing an untidy leap at the last, but he wasn't beaten too far on his first start for 365 days. He will undoubtedly strip fitter for this next time out provided he doesn't bounce, and with the handicapper unlikely to put him up too much for that, if at all, he appeals as a novice who's lurking on a good mark at the moment for his ultra-shrewd yard.

Sevarano - a very nice prospect for the larger obstacles ⭐️

N'Golo certainly has big shoes to fill as a namesake to one of the most stamina-laden footballers on the planet, but he's made an excellent start to his hurdling career for the Willie Mullins team, and took his tally over timber to three wins from four starts with a game success in Grade 3 company at Navan on Sunday. Admittedly, his task was made easier by the early departures of the well-fancied pair of Jesse Evans and Jungle Junction, but this form still looked useful considering he shouldered a 7 lb penalty, and there was plenty to like about his attitude to win from an unpromising position at two from home. Trapped in a pocket on the inside, N'Golo was forced to switch by Paul Townend after an untidy leap, and he found plenty, attacking the final flight and surging down the outside to ultimately win with something in hand.

N'Golo has done very little wrong so far, barring one below par run at Kilbeggan in August, and he appeals as one who will keep improving as he is stepped up in trip. It looks as though he'll be kept at two miles for the time being, with Fairyhouse's Grade 1 Royal Bond being touted as his next destination at the end of this month, but he looks every inch a two and a half miler, and it is only a matter of time before he's tried over further. There ought to be plenty more to come from this likeable type when that time comes, and with that in mind, he could be worth a small play each-way at 33/1 for next year's Ballymore Novices' Hurdle, over a trip which will suit him down to the ground.

One for the @ChelseaFC fans - N'Golo

N'Golo shoulders a penalty in fine style to take out this Grade Three prize at @NavanRacecourse for @WillieMullinsNH & @PTownend 👏 https://t.co/oALJLx3qWy