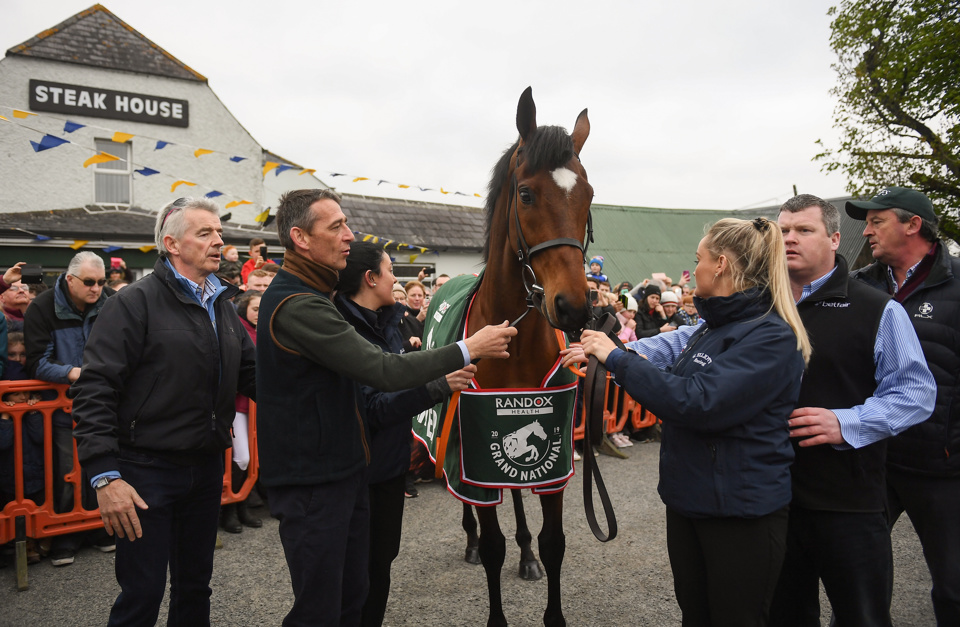 Tiger Roll is set to run at Navan on February 16 in the Boyne Hurdle.

Dual Grand National winner Tiger Roll is expected to make his hotly-anticipated return to the racecourse on Sunday week in the Grade 2 Boyne Hurdle at Navan, according to his trainer Gordon Elliott.

The ten-year-old hasn't been seen on the track since winning the Aintree showpiece last April, where he joined a prestigious group of back-to-back winners of the Merseyside marathon, but Elliott is ready to unleash his star performer next weekend, as he looks to retain his Boyne Hurdle crown.

Speaking to Sky Sports Racing, Elliott said: "He did his first bit of work on Saturday after his setback and he worked well. He’ll work again during the week."

“My plan is to run on Sunday week in the Boyne Hurdle – he won’t be as fit as he was last year and will come on a lot for the run, but it will be a lovely stepping stone to the cross-country (at Cheltenham)," added Elliott.

Tiger Roll was the star name in the 105-strong entry list of runners announced last week for the 2020 Randox Health Grand National, as he looks to become the first horse since the great Red Rum in the mid-1970s to seal a trio of Grand National wins. Unsurprisingly, Tiger Roll is the ante-post favourite for Aintree glory, but there will be an anxious wait for all involved with the horse in the coming weeks as not only will he have to get through his comeback run, but the weights are soon to be announced for the Grand National (February 11) and that could ruffle a few feathers in the camp of the much-loved horse.

However, Elliott will have first his gelding's sights set on winning for a momentous fifth time at the Cheltenham Festival, with the Cross Country Chase being his target. Tiger Roll has won the last two renewals of that race before going on to bag Grand National glory, and Elliott is all set to follow the same path once again.

A shock 25/1 winner of the Boyne Hurdle 12 months ago, Tiger Roll will endeavour to extend his unbeaten run to four races, but Elliott is fully expecting the Gigginstown House Stud-owned superstar to improve for his exertions at Navan with ultimately his targets being another spectacular Cheltenham/Aintree double once again.

“He missed a month, so he’s by no means as fit as he was when he won it last year. Hopefully it will put him spot on for Cheltenham,” concluded Elliott.