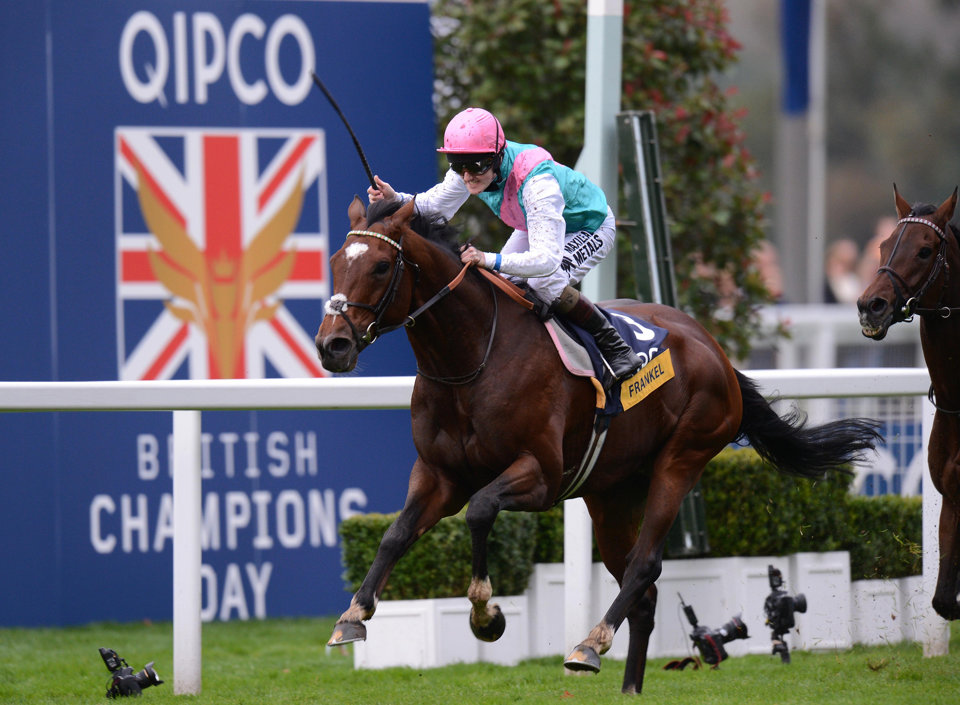 There are four bets for today’s fantastic Champions Day card at Ascot.

There is a chance that this race could come a little soon for the two market leaders Trueshan and Stradivarius. The pair finished first and second in the Group 1 Prix du Cadran at Longchamp two weeks ago and that may have taken quite a bit out of them given that it came over 2m4f on very soft ground. If they’ve recovered sufficiently, then of course they will be bang there again. However, I’m prepared to take an each way chance on THE MEDITERRANEAN (0.5 point each way bet at 14/1), who has had an extra week to prepare. Despite only having one maiden win to his name, he has run consistently well in some very good races. Since finishing fourth to Hurricane Lane at Longchamp in July, he has been placed in the Group 2 Great Voltigeur Stakes, the Group 1 St Leger and a Group 3 at the Curragh last time out. Two miles on good to soft ground looks ideal and Ryan Moore gets back on board for the first time since his Royal Ascot run.

Oisin Murphy can seal a third consecutive jockey’s title by guiding DRAGON SYMBOL (1 point win bet at 15/2) to a much deserved first Group 1 victory. After winning his first four starts earlier this year, he lost out by just a nose in the Group 2 Sandy Lane Stakes at Haydock before losing the Group 1 Commonwealth Cup over this course and distance in the stewards’ room. He has recorded consistent form figures of 2234 in the top sprint races since and now steps back up to six furlongs for the first time since finishing second in the July Cup. The return to an easier surface should suit and he holds strong claims in a wide-open race. Creative Force, rather fittingly ridden by William Buick, is feared most and can chase home the selection.

This is a fascinating renewal of the QEII Stakes with 18 Group 1 victories shared amongst the ten declared runners. Alcohol Free and Mother Earth are strong contenders for the classic generation but I’m expecting the two market leaders to fight out the finish. Palace Pier is an extremely talented horse and five of his nine career wins have come at the highest level. He has only been defeated once and that came in this race last season (had excuses). However, the unbeaten BAAEED (NAP – 1 point win bet at 9/4) could provide the biggest test to date for Palace Pier and lay down a marker to be the next superstar miler. Having progressed through maiden and novice races, this son of Sea The Stars took a Listed race at Newmarket before an ultra-impressive display at Goodwood. He handled the step up to Group 1 company at Longchamp last time out and he remains open to any amount of improvement. What a race!

All eyes will understandably be on the Derby winner Adayar and the impressive Juddmonte International winner Mishriff as they clash for the first time since the King George VI and Queen Elizabeth Stakes. It’d be absolutely no surprise to see either one of them land this race and the bookies can’t split them at around 2/1. However, I am taking an each way chance on the Aidan O’Brien-trained BOLSHOI BALLET (0.5 point each way bet at 33/1) at a huge price. This son of Galileo was sent off as the 11/8 favourite for the Derby following convincing Group 3 wins at Leopardstown, including in the prestigious Derrinstown Trial. He was well beaten that day with no obvious excuses but he bounced back to win the Grade 1 Belmont Derby in the USA next time out. That confirmed him as a very smart horse and although he has since been beaten twice more in America, everything looks to be in his favour today on this return to the UK.

Elsewhere on the card, Snowfall (14:35) will be extremely tough to beat but is priced accordingly. In the final race of the card (16:30), Sunray Major is a rock-solid favourite but Nugget makes more appeal at a bigger price.

#AD New UK customers (Excluding NI) mobile only. £30 in FREE Bets (FB) as £20 in sports bets & a £10 casino bonus (CB). Min stake £10. Min odds Evs. FB applied on 1st settlement of any qualifying bet. FB 7 day expiry. 1 FB offer per customer, household & IP address only. Payment restrictions. 14 days to accept £10 CB, then active for 3 days. CB 5x wagering & max redeemable £100. Game restrictions apply. Cashed out/Free Bets won’t apply. 30 days to qualify. 18+. T&Cs apply
get offer
Bet £10 get £30 in Free Bets
#AD New customers on mobile only. 7 days to claim and stake £10 minimum bet at odds of 1.5 or greater to qualify. Free, void, cashed out or partially cashed out bets do not qualify. Max 3x £10 free bets credited on bet settlement. Free bets must be used on 4 or more selections with selection odds of 1.3 or greater. Free bets are non-withdrawable, and stake not returned with winnings. 7 day expiry. 18+BeGambleAware.org. T&Cs apply.
Double the odds, any sport, any bet, any odds!
#AD 18+ begambleaware.org Only valid for new registrations to Grosvenor Existing members do not qualify, Bet must be placed using real money in combination with the Odds Boost Token, Offer applies to Sport bets only. Max stake is £10. Each way bets are a maximum of £5 each way (£10 total). Customers have 60 days after registration to use the Odds Boost token. T&Cs apply.
Bet £20 & Get it Back As CASH If It Loses
#AD New customers only. Place your FIRST bet on any Horse Racing market and if it loses we will refund your stake in CASH. Max refund for this offer is £20. Only deposits made using cards will qualify for this promotion. T&Cs apply.
Welcome Offer
#AD Bet £10 & Get £50 in Free Bets for new customers at bet365. Min deposit requirement. Free Bets are paid as Bet Credits and are available for use upon settlement of bets to value of qualifying deposit. Min odds, bet and payment method exclusions apply. Returns exclude Bet Credits stake. Time limits and T&Cs apply. The bonus code SPTS365 can be used during registration, but does not change the offer amount in any way.
Bet £10 Get £30 In Free Bets
#AD 18+. Play Safe. New customers using Promo code R30 only, Min £10/€10 stake,  min odds 1/2, free bets paid as 3 x £10/€10, free bets credited after settlement of first qualifying bet, free bets will expire 30 days after the qualifying bet is placed, payment method/player/country restrictions apply.
Bet £20 & Get it Back As CASH If It Loses
#AD 18+ begambleaware.org Max £20 refund on first bet. Bet must be placed in first 7 days of account opening. Only deposits made via Debit Card will be eligible for the promotion. T&Cs apply.
Bet £10 Get £60 in Bonuses
#AD New UK customers only. Register using the promo code BETFRED60, deposit and place first bet of £10+ on Sports (cumulative Evens+) within 7 days of registration. First bet must be on Sports. £20 in Free Bets to be used on Sports, £10 in Free Bets to be used on Lotto and 50 Free Spins (20p per spin) credited within 48 hours of bet settlement. Further £20 in Free Bets credited 5 days after settlement. Bonuses have a 7-day expiry. Payment restrictions apply. SMS verification and/or Proof of I.D and address may be required. Full T&Cs apply.
Bet £10 Get £30 Free Bets (APP Only)
#AD New UK, IE & Malta customers only. 18+. Min £10/€10 first deposit using Debit Card or Trustly. Place a bet of £10 at min odds of 1.5. Free bets expire in 90 days. Full T&Cs apply.
Bet £10 Get £30 Free Bets + £10 Casino Bonus
#AD Minimum deposit of £10 using deposit code 30F - A qualifying bet is a ‘real money’ stake of at least £10 placed on any sports market - Minimum odds of 1/2 (1.5) - Free bets credited upon qualifying bet settlement and expire after 7 days - Free bet stakes not included in returns - Casino Bonus must be claimed within 7 days • To withdraw bonus/related wins, wager bonus amount x40 within 14 days • Wagering req. vary by game • Withdrawal restrictions and Full T&C’s apply. 18+ begambleaware.org
Bet £10 Get £30 Free Bets
#AD Offer includes a free £1 Race Index spread bet to try out our exciting 50-25-10 race markets. Place a £10 fixed odds bet at minimum odds of 1/2. Get 2 x £10 free fixed odds bets + 2 x £5 free Winning Favourites spread bets. Bet with live streaming on all racing and greyhounds! Ts&Cs Apply. 18+ begambleaware.org
£35 Free Bet + 10 Free Spins
If your account has Sportsbook losses at the end of your first day's betting, QuinnBet will refund 50% of your losses as a Free Bet up to £35 (min 3 bets) Plus 10 Free Spins. Even if your account is up, you're guaranteed a £5 Free Bet Plus 10 Free Spins provided you place at least 1 bet of £10 or greater at the minimum odds. T&Cs apply | 18+ New UK Customers Only | BeGambleAware.org
50% Up To £50 Welcome Bonus
#AD 18+ begambleaware.org; New bettors get 50% of deposit up to £50; Once per household; Min deposit £15 (no Skrill/Neteller); Wager a total of 8 times deposit + bonus, with max qualifying bet stake equal to your initial bonus amount; Bonus expires after 60 days; Min odds of 4/5 on singles, or 2/5 per leg for acca; Some bet types excluded; See full terms.
Latest racing results
Newcastle
16:45
Full Result
1stLarado
20/1
2ndZip
12/1
3rdThe Turpinator
20/1
Newcastle
16:10
Full Result
1stDe Bruyne
15/8
2ndMacho Mania
11/10F
3rdTilt At Windmills
14/1
Exeter
15:45
Full Result
1stInthewaterside
7/2
2ndTake No Chances
11/4
3rdHe's My Shadow
50/1
View All Today's Results