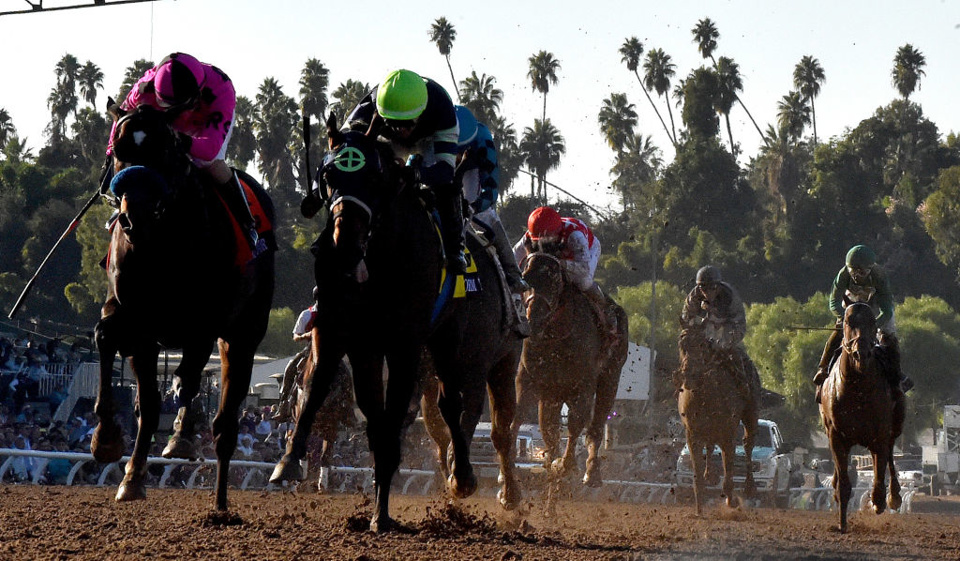 With the racing in the UK, Ireland and surrounding regions cancelled due to the outbreak of coronavirus, Nick Seddon takes a look at this evening's action at Gulfstream Park and Golden Gate Fields, and picks out his best bets...

There's a bumper 14-race card at Gulfstream this evening, which kicks off at 15:30 and is live to watch on Sky Sports Racing from 16:45. Several make appeal, including the Qatar Racing-owned Vitalogy, who takes chance in the Cutler Stakes over one mile (17:00). The three-year-old began his career with Joseph O'Brien, but he's thrived since heading Stateside, picking up his first win in the country when striking in Grade 3 company over course and distance last time out. That form looks strong, and he's fancied to strike again here.

The first graded action comes at 18:00 in the form of the Grade 3 Hal's Hope Stakes, and it could be worth siding with Identifier each-way at a huge price. This looks a wide-open affair, and the four-year-old arrives here in fine form, having won three of his last six outings - including over course and distance last time out. This is a considerable jump in class, but he's in really good heart and could raise a few eyebrows from a handy draw.

The Grade 3 Orchid Stakes is due off at 20:17 over one mile and three furlongs, and the four-year-old filly Mean Mary will take all of the beating. She arrives here in fine form having won three of her last four outings, including when striking at this level over a furlong further here in January. This contest looks no tougher, and she is a confident pick to continue her good run of form.

Following that contest is the Grade 2 Gulfstream Park Oaks (20:49), which is for three-year-old fillies over slightly further than a mile. Several catch the eye here, though it's difficult to look past the unbeaten Tonalist's Shape, who will be tough to stop as she bids sixth win in a row. The latest of those successes came in Grade 3 company over a mile here last month, and she can take another step forward this evening and extend her winning start to her career.

Last but not least is the feature, the Grade 1 Florida Derby, which is due off at 22:36. Although the race is for three-year-old colts, it's over three furlongs shorter than the Epsom Derby, at one mile and one furlong. For win purposes, it's very difficult to look past the favourite Tiz The Law, who already has Grade 1-winning form to his name as a two-year-old. He made a winning reappearance over slightly shorter here last month, and is fancied to prove too strong for this field. Meanwhile, there are as many as four places up for grabs with some bookmakers, and it looks worth taking the 16/1 about As Seen On TV each-way. A prominently-ridden type, he's been shaping well in his two starts so far this season, and it would be no surprise to see him run into a place.

We also have action in California at Golden Gate Fields, which will plough on and host a nine-race card despite neighbouring Santa Anita being told to close by the authorities. A couple catch the eye on the card, including the likeable seven-year-old Lil' Chieftain, who bids for a double in the opening race (19:45). He picked up the sixth win of his career in really good style over course and distance last time out, and from a handy inside draw, he can get punters off to the perfect start by repeating the feat here.

The other runner who makes plenty of appeal on the card is Colormemoney (21:46). The five-year-old was slightly disappointing when sent off as the favourite over five and a half furlongs here last time out, only managing to finish fifth. He has to overturn the form with Quick And Silver here, who was third that day, but he clearly didn't give his true running on that occasion, and the market support for him this morning is encouraging. As such, he's fancied to take this.

You can qualify for weekly rewards when you place min 1 qualifying bet of £5 or more on Sports/Virtuals. Max free bet is £10 per week when you wager 5 x £10+ in a week, min odds 1/2 (1.5) per qualifying bet. Free bet valid until Sunday 23:59. Max Power Up is 1 per week, valid for 7 days & max stake is £50. Rewards credited by 12pm on Monday following the qualifying week. Cashed out bets & bets placed with free bets will not count. T&Cs apply.