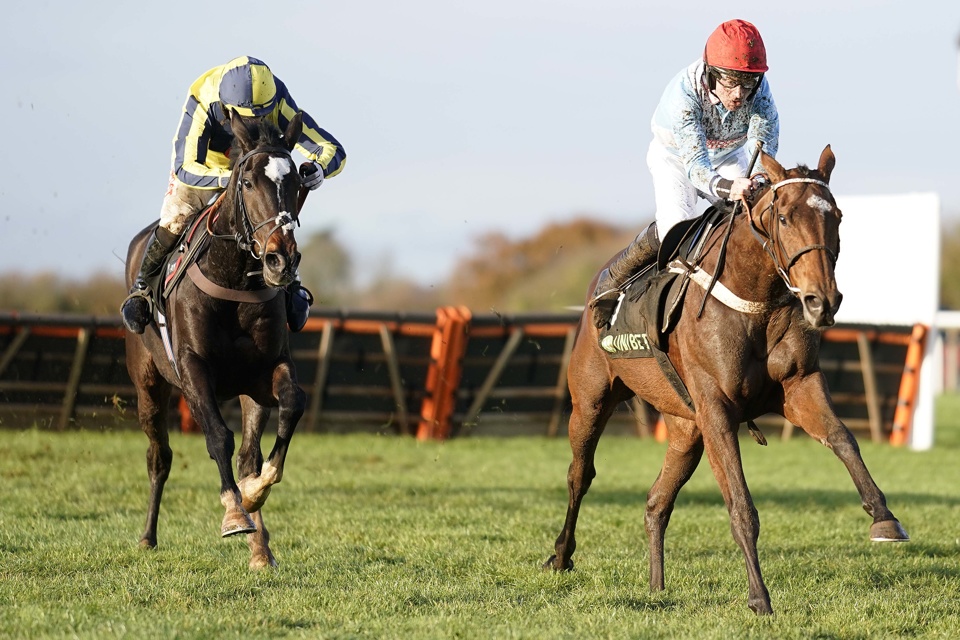 After travelling strongly, yesterday’s NAP File Illico (advised at 7/1) made a couple of errors in the straight at Wetherby and looked set to finish second before rallying in fine style to get up close home. It was a third winner of the year for me and I’m hoping to add to that tally today with five bets for the racing at Wincanton and Sandown.

In-form trainer Anthony Honeyball saddles MIDNIGHT CALLISTO (1 point win bet at 13/2), who made a promising start to her career when winning a bumper by 8-lengths on her racecourse debut before being placed in a Listed NHF race at Market Rasen. Unfortunately, she is yet to build on that form over hurdles and is still a maiden in this sphere after seven races. However, she has shaped with promise on her last two starts and can gain a deserved win today. Fourth of 16 runners at Southwell in November, she then found just one too good at Taunton last time out. The front two pulled ten-lengths clear of the rest and a repeat of that form would make her difficult to beat. With proven stamina over further, I’d expect to see her ridden positively and the fitting of first time cheekpieces is another reason to be optimistic.

Another race in which I am siding with the Anthony Honeyball representative: BELLE DE MANECH (NAP - 1 point win bet at 9/2). Since sending this mare out to win here at Wincanton on Boxing Day, the trainer has won with four of his 12 runners so clearly has his string in fine form. A bumper and hurdle (at this course) winner, this six-year-old’s victory over 2m4f here two weeks ago came on her chase debut by an impressive 14-lengths. Her jumping was good and there is every chance she can follow up today with no concern over the drop back in trip. Jockey Rex Dingle knows the horse well and the pair can get the better of Grey Diamond, who drops down in grade to contest this.

With several runners pulled out due to the easing in the ground, a chance is taken on two that should handle conditions: GOLDEN EMBLEM (0.5 point win bet at 9/1) and EARTH BUSINESS (0.5 point win bet at 11/1). Golden Emblem has to bounce back from a couple of disappointing runs this season but she was a convincing winner over this course and distance less than a year ago and is now slipping back down the weights. Earth Business is still a maiden but looks sure to be suited by this intermediate trip having raced over two miles and three miles already this season. His best effort came over 2m3f and he remains open to improvement with more experience now gained.

This looks a good opportunity for NUMITOR (1 point win bet at 5/2) to continue his progression over fences. Yet to finish out of the first three in his six starts over the larger obstacles to date, Heather Main’s eight-year-old goes in search of a fourth career success today. One of his three wins came on his seasonal reappearance back in October and he then ran well to finish second in a decent Newbury race the following month. He has been raised just 2lbs by the handicapper since that run and has been freshened up ahead of this. He will have no problem with conditions, has had a previous run over the Sandown fences and is clearly held in high regard by connections as he was set to run in the Grade 1 Arkle at last year’s Cheltenham Festival. Monsieur Lecoq can chase home the selection.

#AD New UK customers (Excluding NI) mobile only. £30 in FREE Bets (FB) as £20 in sports bets & a £10 casino bonus (CB). Min stake £10. Min odds Evs. FB applied on 1st settlement of any qualifying bet. FB 7 day expiry. 1 FB offer per customer, household & IP address only. Payment restrictions. 14 days to accept £10 CB, then active for 3 days. CB 5x wagering & max redeemable £100. Game restrictions apply. Cashed out/Free Bets won’t apply. 30 days to qualify. 18+. T&Cs apply
get offer
Bet £10 get £30 in Free Bets
#AD New customers on mobile only. 7 days to claim and stake £10 minimum bet at odds of 1.5 or greater to qualify. Free, void, cashed out or partially cashed out bets do not qualify. Max 3x £10 free bets credited on bet settlement. Free bets must be used on 4 or more selections with selection odds of 1.3 or greater. Free bets are non-withdrawable, and stake not returned with winnings. 7 day expiry. 18+BeGambleAware.org. T&Cs apply.
Double the odds, any sport, any bet, any odds!
#AD 18+ begambleaware.org Only valid for new registrations to Grosvenor Existing members do not qualify, Bet must be placed using real money in combination with the Odds Boost Token, Offer applies to Sport bets only. Max stake is £10. Each way bets are a maximum of £5 each way (£10 total). Customers have 60 days after registration to use the Odds Boost token. T&Cs apply.
Bet £20 & Get it Back As CASH If It Loses
#AD New customers only. Place your FIRST bet on any Horse Racing market and if it loses we will refund your stake in CASH. Max refund for this offer is £20. Only deposits made using cards will qualify for this promotion. T&Cs apply.
Welcome Offer
#AD Bet £10 & Get £50 in Free Bets for new customers at bet365. Min deposit requirement. Free Bets are paid as Bet Credits and are available for use upon settlement of bets to value of qualifying deposit. Min odds, bet and payment method exclusions apply. Returns exclude Bet Credits stake. Time limits and T&Cs apply. The bonus code SPTS365 can be used during registration, but does not change the offer amount in any way.
Bet £10 Get £30 In Free Bets
#AD 18+. Play Safe. New customers using Promo code R30 only, Min £10/€10 stake,  min odds 1/2, free bets paid as 3 x £10/€10, free bets credited after settlement of first qualifying bet, free bets will expire 30 days after the qualifying bet is placed, payment method/player/country restrictions apply.
Bet £20 & Get it Back As CASH If It Loses
#AD 18+ begambleaware.org Max £20 refund on first bet. Bet must be placed in first 7 days of account opening. Only deposits made via Debit Card will be eligible for the promotion. T&Cs apply.
Bet £10 Get £60 in Bonuses
#AD New UK customers only. Register using the promo code BETFRED60, deposit and place first bet of £10+ on Sports (cumulative Evens+) within 7 days of registration. First bet must be on Sports. £20 in Free Bets to be used on Sports, £10 in Free Bets to be used on Lotto and 50 Free Spins (20p per spin) credited within 48 hours of bet settlement. Further £20 in Free Bets credited 5 days after settlement. Bonuses have a 7-day expiry. Payment restrictions apply. SMS verification and/or Proof of I.D and address may be required. Full T&Cs apply.
Bet £10 Get £30 Free Bets (APP Only)
#AD New UK, IE & Malta customers only. 18+. Min £10/€10 first deposit using Debit Card or Trustly. Place a bet of £10 at min odds of 1.5. Free bets expire in 90 days. Full T&Cs apply.
Bet £10 Get £30 Free Bets + £10 Casino Bonus
#AD Minimum deposit of £10 using deposit code 30F - A qualifying bet is a ‘real money’ stake of at least £10 placed on any sports market - Minimum odds of 1/2 (1.5) - Free bets credited upon qualifying bet settlement and expire after 7 days - Free bet stakes not included in returns - Casino Bonus must be claimed within 7 days • To withdraw bonus/related wins, wager bonus amount x40 within 14 days • Wagering req. vary by game • Withdrawal restrictions and Full T&C’s apply. 18+ begambleaware.org
Bet £10 Get £30 Free Bets
#AD Offer includes a free £1 Race Index spread bet to try out our exciting 50-25-10 race markets. Place a £10 fixed odds bet at minimum odds of 1/2. Get 2 x £10 free fixed odds bets + 2 x £5 free Winning Favourites spread bets. Bet with live streaming on all racing and greyhounds! Ts&Cs Apply. 18+ begambleaware.org
£35 Free Bet + 10 Free Spins
If your account has Sportsbook losses at the end of your first day's betting, QuinnBet will refund 50% of your losses as a Free Bet up to £35 (min 3 bets) Plus 10 Free Spins. Even if your account is up, you're guaranteed a £5 Free Bet Plus 10 Free Spins provided you place at least 1 bet of £10 or greater at the minimum odds. T&Cs apply | 18+ New UK Customers Only | BeGambleAware.org
50% Up To £50 Welcome Bonus
#AD 18+ begambleaware.org; New bettors get 50% of deposit up to £50; Once per household; Min deposit £15 (no Skrill/Neteller); Wager a total of 8 times deposit + bonus, with max qualifying bet stake equal to your initial bonus amount; Bonus expires after 60 days; Min odds of 4/5 on singles, or 2/5 per leg for acca; Some bet types excluded; See full terms.
Latest racing results
Sandown
15:30
Full Result
1stHugos New Horse
13/8F
2ndGalahad Threepwood
5/1
3rdAlioski
16/1
Sedgefield
15:20
Full Result
1stJudicial Review
15/8F
2ndBoomslang
11/2
3rdLongagoanfarbehind
9/2
Exeter
15:10
Full Result
1stFavori De Sivola
13/2
2ndLight Flicker
13/2
3rdDe Young Warrior
7/2F
View All Today's Results