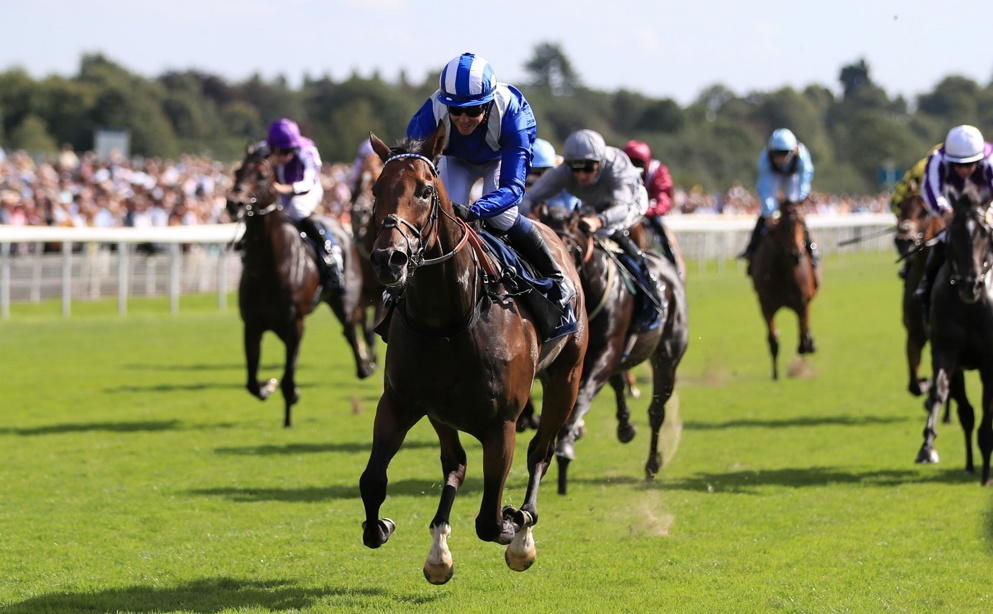 Battaash is aiming to win the Nunthorpe for the second year running.

Nick Seddon runs through the card on Day Three of this year's York Ebor Festival, and picks out his best bet in every race...

We kick off Friday's action with a handicap over just shy of a mile and a half, in which the progressive Zabeel Champion ticks plenty of boxes. He's been kept busy so far this campaign and has shown some useful form, winning back-to-back contests at Newmarket over a mile and a quarter in June and July respectively. He produced his best effort yet to finish second over ten furlongs at Glorious Goodwood last month, and with a 3 lb rise for that looking fair, he can improve for the extra two furlongs here and return to winning ways.

There's no Stradivarius this year in the absence of the £1 million Stayers' Bonus, and we're left with an intriguing heat as a consequence. It's interesting to see the consistent mare Enbihaar step up to two miles for the first time, and bearing in mind that the extra two furlongs should hold no fears, she'd have strong claims on her best form after a convincing success in a Group 2 contest last time out. Any money for either of the Tony Bloom-owned pair of Stratum or Withhold would be interesting, but a clear preference is for Nayef Road. He's had to settle for minor honours behind Stradivarius the last twice, but he's a smart performer on the day, and bearing in mind his particularly game attitude in his races, he'd be a tough nut to crack if repeating his fine effort to finish second in last month's Goodwood Cup.

A Group 2 contest which has produced the likes of Blue Point and Muhaarar in recent years, and Mohawk King gets a narrow vote to join the illustrious roll of honour. An expensive purchase at the sales, he's got an eye-catching pedigree and made the perfect start to his career when narrowly prevailing over this trip at Ascot last month. He impressed with his professionalism that day, winning from a difficult position, and he can take a step forward here and follow up - bearing in mind that a certain Mums Tipple won that Ascot race last year before following up at this meeting. He's just preferred to Minzaal, who got off the mark at the second attempt in really taking  fashion at Salisbury earlier this month, and there's likely to be more to come from him yet for his exciting young sire Mehmas.

This isn't quite the stellar renewal of the Nunthorpe we had anticipated a few weeks ago, and it is impossible to oppose Battaash as a consequence. The six-year-old has been in sublime form in his two starts so far this season, and bearing in mind that he broke the track record when winning this race last year, it is very difficult to see anything other than another success. The improving Art Power could well give the favourite something to think about if improving for the step into Group 1 company, while the consistent A'ali looks best of the rest.

A long-winded name for this 10-runner maiden, and this looks a good opportunity for Naval Crown to open his account at the third attempt. He built on a solid debut run to finish a fine third in a listed contest at Ascot last month, in which he very much got the hang of things in the closing stages. That experience ought to have served him well, and with that form looking strong for this level, he can prove too strong. The biggest danger looks to be Tawleed, who comes from a talented family and was  only beaten by his stablemate on debut at Goodwood last month, while there should be more to come from both Rushmore and Broomy Law on their second career outings.

Several to consider in this eight-runner affair, though a pretty confident vote goes the way of Waliyak, who has impressed in her two starts so far this season. She was second in a strong-looking renewal of the Sandringham Handicap on reappearance in June, and while she was only second to the re-opposing Chamade at Goodwood last time, she stayed on well  after conceding first run, and can make the most of a 5 lb swing in the weights - of what looks a more than workable mark of 90. Top weight Chamade will need more if she is to confirm the form of her surprise win last time out after an 8 lb rise, while Asiaaf merits plenty of respect after finishing an excellent second at the same meeting as the aforementioned pair last month.

We close Friday's card with a competitive three-year-old handicap over just shy of a mile. This looks wide open, and with that in mind it could be worth chancing the in-form Mon Choix each-way at around the 12/1 mark. He's really clicked into the place the last twice, and followed up an emphatic breakthrough success at Windsor at the beginning of the month with another authoritative display at Sandown four days later. He's been bumped up a whopping 13 lb for that latest triumph, but he's clearly in good heart at the moment, and he looked a good way clear of his mark. Provided his recent busy spell doesn't catch up with him, he's fancied to find the necessary improvement and hit the frame at the very least under Oisin Murphy. Each of Finest Sound, Cloud Drift and Hartswood merit consideration against the selection.