The Triumph Hurdle is always a hugely exciting race on Friday afternoon.

Gordon Elliott's hugely exciting, unbeaten juvenile Fil Dor is one of the star names among the 59 entries received for the Triumph Hurdle, which kickstarts the final day of the Cheltenham Festival on March 18. We take a look at the entries for the four-year-old feature here...

A hugely impressive seven-length winner of the Grade 2 Knight Frank Juvenile Hurdle at Leopardstown over the Christmas period, Fil Dor was instantly launched to outright favouritism for the Triumph Hurdle, and the Gordon Elliott-trained youngster is now a best-priced 5/2 favourite for the juvenile event. Prior to that Leopardstown contest he was a Grade 3 winner at Fairyhouse in November, where he beat Noel Meade's Lunar Power, who he incidentally beat at Leopardstown in December, and Meade is set for another crack at the Elliott hotpot and he's available at 33/1 with some firms.

Dominant at the head of the betting, Fil Dor is sure to have to face some improving youngsters and Willie Mullins, who trained Burning Victory to glory in the 2020 renewal, is sure to have an embarrassment of riches, and the Closutton team could be spearheaded by Vauban. Second behind the Elliott-trained Pied Piper (14/1), who is also entered, Vauban shaped like he could be an exciting jumping prospect going forward, and at 8/1 he is the shortest-priced Mullins raider in the ante-post betting.

Others from the Mullins team that could feature include the unbeaten Icare Allen (12/1), Vadaly (66/1) and Gaelic Warrior (40/1), who is yet to run for the Co.Carlow handler yet. 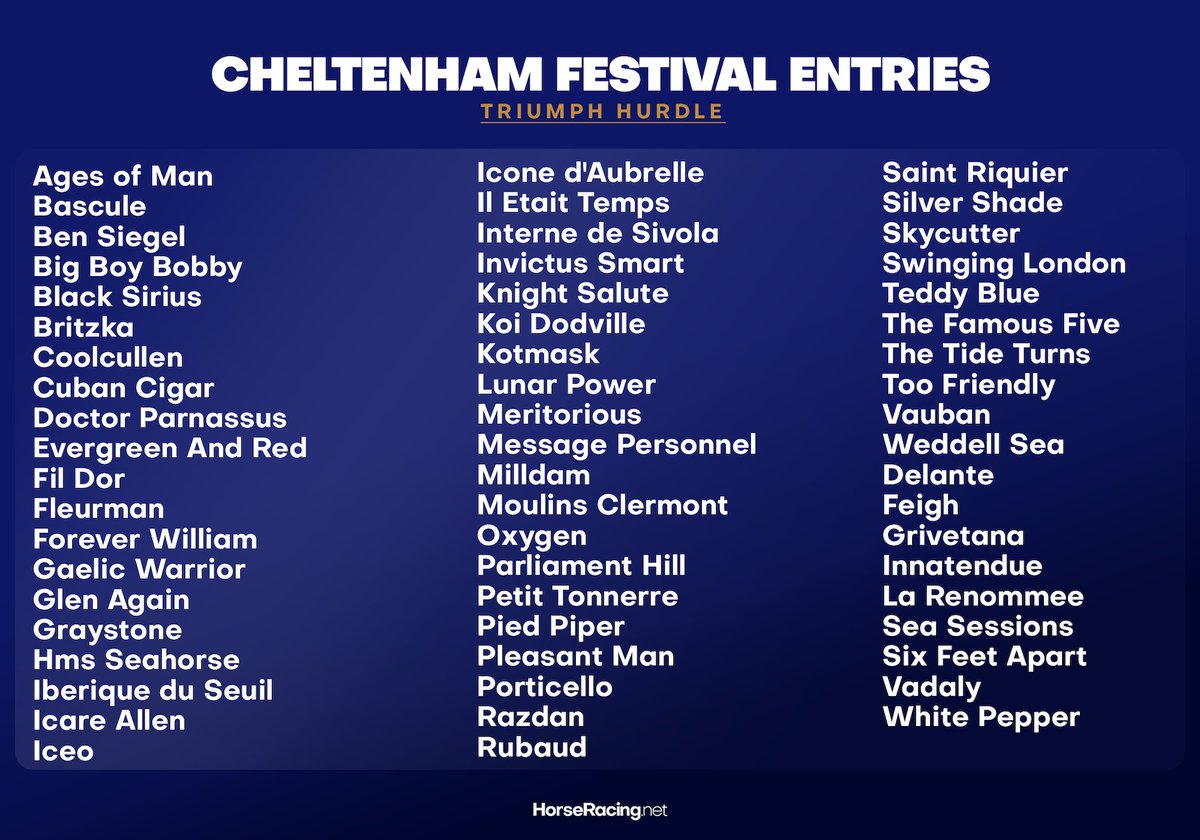 And finally here are the entries for the Triumph Hurdle!

Not since 2017 when Defi Du Seuil bounded to glory has a British-trained raider been victorious in the Triumph, but the home brigade should have a strong team heading to Prestbury Park, and Gary Moore's Porticello showed his class when winning the Grade 1 Juvenile Hurdle at Chepstow earlier in the season. Now available at 12/1, Porticello showed a real class about him that day, as he won by eight-and-a-half lengths, and he could be open to more improvement.

Paul Nicholls has trained the likes of Celestial Halo (2008) and Zarkandar (2011) to glory and the Ditcheat handler is set to unleash the 14/1 chance Iceo, who was an imperious 17-length winner at Kempton Park in late December, and while he will have tougher assignments in the spring he looks an exciting youngster.

Milton Harris has been have a fine season and he could have a lively each-way contender in the shape of Knight Salute (14/1), who has been a real winning machine this season, and he got the better last time out of the abovementioned Porticello in a Doncaster Grade 2 contest. A decent performer on the level for Andrew Balding, Knight Salute has blossomed over hurdles and he's another exciting entry.

With plenty of time until the Triumph is run, there are sure to be some juveniles that venture into the picture in the coming weeks, so make sure you keep an eye on the latest betting for the race on dedicated page on this site.