What does it take to complete the 'Best Mate Treble'? 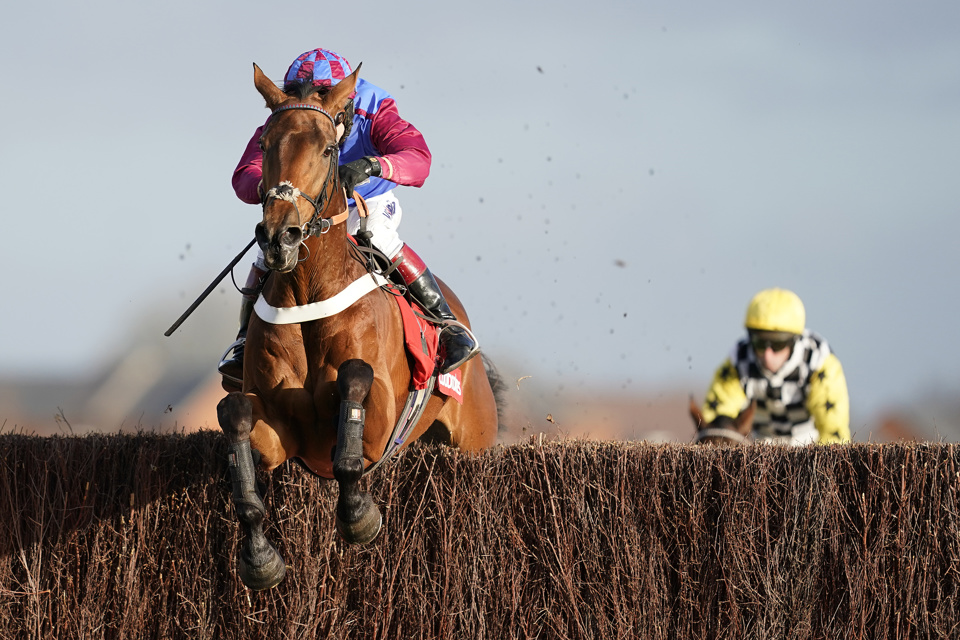 With bookmaker Fitzdares offering a £500,000 bonus to any horse that can win the Peterborough Chase, the King George and the Gold Cup in the same season, Sean Raymond takes a look at the main horse in the frame...

The Peterborough Chase may not be the feature race this weekend, with the Tingle Creek at Sandown and the John Durkan at Punchestown taking centre stage, but the Huntingdon contest should not be forgotten.

The Grade 2 affair may not hold the standing it once did, with great horses like Wayward Lad, Remittance Man, One Man and Edredon Bleu on the roll of honour, but it has received a boost this season in honour of one of its most famous winners. Best Mate is best known for his three Gold Cup wins at The Cheltenham Festival, which to this day remains a remarkable achievement by any standard, but he too had his day in the sun in the Peterborough Chase.

The Henrietta Knight-trained legend won the Huntingdon race, the King George and the Gold Cup in the 2002/03 season, and Fitzdares Bookmakers are this season offering a huge £500,000 bonus to any horse able to repeat that Herculean feat. It isn't going to be easy to emulate Best Mate, though, and the triple Festival hero has been unmatched in recent years when it comes to his ability to produce the goods on the day.

The fact that he was able to win a Peterborough Chase down at two-and-a-half miles is sometimes forgotten, considering he was largely seen as something of a grinder who loved to devour the Cheltenham hill. That wasn't the case, though, as he proved in the 2002 Huntingdon contest, with that season living long in the memory of racing fans.

The Peterborough Chase and the King George are a matter of days apart, which makes it a tough assignment for any horse, but Best Mate was at the top of his game that winter as he proved with those three famous wins.

Attention now turns to this weekend's edition of the Grade 2 contest, and if there is one horse in the field who has an outside chance of completing the feat, it is the talented mare La Bague Au Roi.

The Warren Greatrex-trained mare has grown into one of the most popular in training over the past year or so, and her connections appear to have one eye on emulating Best Mate this season.

First stop will be Huntingdon this weekend, and with a sex allowance in her favour, it is easy to see why the bookmakers rate her as the one to beat.

La Bague Au Roi may have been pulled-up in the Charlie Hall Chase at Wetherby on her seasonal reappearance, but she was a dual Grade 1-winning novice chaser last season, beating subsequent RSA Chase winner Topofthegame in the Kauto Star Novices' Chase at Kempton over Christmas, and is more than worth her place at the top table of the sport.

Greatrex has always been a massive fan of the horse, and a crack at the second leg of the "Best Mate Treble" could well be on the agenda according to the Lambourn handler if she performs as expected this Sunday

He said: "We’ll possibly have a crack at the King George if she wins at Huntingdon.

Obviously a lot will need to happen, and it would be tough with only 18 days between the two races, but it will be very tempting if she went and won well. We’d definitely think about it."

It remains to be seen if the horse will be among the Cheltenham Runners for the Gold Cup at this stage of the campaign, considering she's suffered defeat on both of her runs at Prestbury Park to date, but the temptation will certainly be there if she was able to add both the Peterborough Chase and the King George to her CV.

Should she win on Sunday, her current price of 66/1 for the blue-riband event might just start to contract.

ICYMI: La Bague Au Roi is on track to run in the @Fitzdares Peterborough Chase at @Huntingdon_Race on Sunday 🙌 >>>https://t.co/kcba4Hbf7T https://t.co/2mnLa173al

10:31 AM - 4th Dec 19
5
20
Racing Free Bets
10 Horses to Follow for National Hunt Season: Could some Cheltenham Festival winners emerge from this team?
By Steve Chambers