1965 Chase Odds: Defi and Drasher among 11 entries for Ascot Grade 2 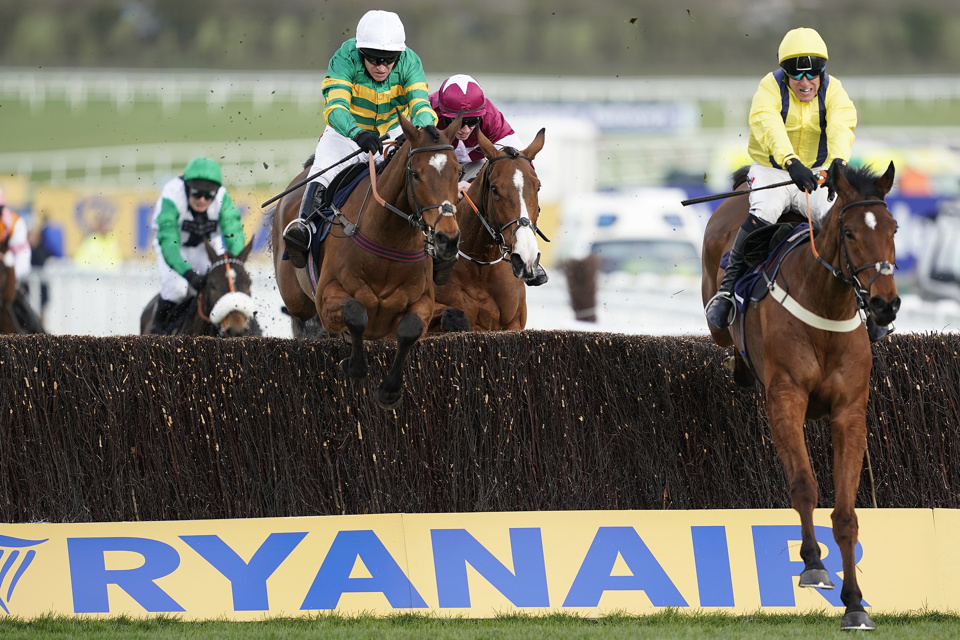 Defi Du Seuil and Lostintranslation could clash at Ascot on Saturday.

There's an enthralling National Hunt card set to light up at Ascot on Saturday afternoon, and one of the highlights of the day is the Grade 2 Chanelle Pharma 1965 Chase, which has attracted a stellar list of entries for what is a thrilling 2m 5f 8y contest...

Hugely progressive last season, Jeremy Scott's Dashel Drasher will attempt to kick off his new season on a winning note and he has been installed as the 100/30 favourite with bookmakers for the 1965 Chase. Three superb wins at Ascot last season saw him progress into one of the stars of the season, and his 2020/2021 campaign ended with a fine win in the Ascot Chase over course and distance, where he beat Master Tommytucker by two lengths.

Taking his chance over the same trip on Saturday, Dashel Drasher could arguably have a tougher task on his hands, as he faces some proven top notch chasers, who will be looking to start their seasons on a positive note.

Former JLT Novices' Chase winner Defi Du Seuil has had somewhat of an indifferent couple of seasons, but if he can replicate the form that saw him win a Grade 1 Clarence House Chase at Ascot then the current 4/1 available with the bookmakers could be huge, if he can excel over this 2m 5f. Colin Tizzard's Lostintranslation (9/2) lost his way last season when trying to land some notable events over three miles and beyond, and last seen pulling up in the Cheltenham Gold Cup he will need to be galvanised by a drop back in trip, but the yard in flying form at the moment, so he can't be discounted.

A race that can often throw up a classy winner that goes on to compete in the Ryanair Chase at the Cheltenham Festival, the 1965 Chase is always a mid-November highlight, and Paul Nicholls could saddle Master Tommytucker (6/1), who was last seen over hurdles, while Olly Murphy's Itchy Feet (6/1) was last seen running a big race behind Allmankind in the Old Roan Chase at Aintree, and he adds more depth to the race.

Kim Bailey's Espoir De Romay (7/1) failed to land a blow in the Colin Parker Memorial at Carlisle in his first start this season, but he will improve for that outing, and with a run under his belt that could add his chances, while Bennys King (8/1) and Cepage (10/1) are another prominent duo in the betting.

A fascinating entry is the dual Grand National winner Tiger Roll, who at the age of 11, is looking to defy his years by landing this event. However, he's a 33/1 outsider for the event, and it could be a surprise to see him make the trip over from Ireland for this event. Completing the 11-strong field, Franco De Port (12/) and Pistol Whipped (16/1) could well take their chance in a field dominated by top notch horses in what could be one of the early season highlights.

#AD New UK customers (Excluding NI) mobile only. £30 in FREE Bets (FB) as £20 in sports bets & a £10 casino bonus (CB). Min stake £10. Min odds Evs. FB applied on 1st settlement of any qualifying bet. FB 7 day expiry. 1 FB offer per customer, household & IP address only. Payment restrictions. 14 days to accept £10 CB, then active for 3 days. CB 5x wagering & max redeemable £100. Game restrictions apply. Cashed out/Free Bets won’t apply. 30 days to qualify. 18+. T&Cs apply
get offer
Bet £10 get £30 in Free Bets
#AD New customers on mobile only. 7 days to claim and stake £10 minimum bet at odds of 1.5 or greater to qualify. Free, void, cashed out or partially cashed out bets do not qualify. Max 3x £10 free bets credited on bet settlement. Free bets must be used on 4 or more selections with selection odds of 1.3 or greater. Free bets are non-withdrawable, and stake not returned with winnings. 7 day expiry. 18+BeGambleAware.org. T&Cs apply.
Double the odds, any sport, any bet, any odds!
#AD 18+ begambleaware.org Only valid for new registrations to Grosvenor Existing members do not qualify, Bet must be placed using real money in combination with the Odds Boost Token, Offer applies to Sport bets only. Max stake is £10. Each way bets are a maximum of £5 each way (£10 total). Customers have 60 days after registration to use the Odds Boost token. T&Cs apply.
Bet £20 & Get it Back As CASH If It Loses
#AD New customers only. Place your FIRST bet on any Horse Racing market and if it loses we will refund your stake in CASH. Max refund for this offer is £20. Only deposits made using cards will qualify for this promotion. T&Cs apply.
Welcome Offer
#AD Bet £10 & Get £50 in Free Bets for new customers at bet365. Min deposit requirement. Free Bets are paid as Bet Credits and are available for use upon settlement of bets to value of qualifying deposit. Min odds, bet and payment method exclusions apply. Returns exclude Bet Credits stake. Time limits and T&Cs apply. The bonus code SPTS365 can be used during registration, but does not change the offer amount in any way.
Bet £10 Get £30 In Free Bets
#AD 18+. Play Safe. New customers using Promo code R30 only, Min £10/€10 stake,  min odds 1/2, free bets paid as 3 x £10/€10, free bets credited after settlement of first qualifying bet, free bets will expire 30 days after the qualifying bet is placed, payment method/player/country restrictions apply.
Bet £20 & Get it Back As CASH If It Loses
#AD 18+ begambleaware.org Max £20 refund on first bet. Bet must be placed in first 7 days of account opening. Only deposits made via Debit Card will be eligible for the promotion. T&Cs apply.
Bet £10 Get £60 in Bonuses
#AD New UK customers only. Register using the promo code BETFRED60, deposit and place first bet of £10+ on Sports (cumulative Evens+) within 7 days of registration. First bet must be on Sports. £20 in Free Bets to be used on Sports, £10 in Free Bets to be used on Lotto and 50 Free Spins (20p per spin) credited within 48 hours of bet settlement. Further £20 in Free Bets credited 5 days after settlement. Bonuses have a 7-day expiry. Payment restrictions apply. SMS verification and/or Proof of I.D and address may be required. Full T&Cs apply.
Bet £10 Get £30 Free Bets (APP Only)
#AD New UK, IE & Malta customers only. 18+. Min £10/€10 first deposit using Debit Card or Trustly. Place a bet of £10 at min odds of 1.5. Free bets expire in 90 days. Full T&Cs apply.
Bet £10 Get £30 Free Bets + £10 Casino Bonus
#AD Minimum deposit of £10 using deposit code 30F - A qualifying bet is a ‘real money’ stake of at least £10 placed on any sports market - Minimum odds of 1/2 (1.5) - Free bets credited upon qualifying bet settlement and expire after 7 days - Free bet stakes not included in returns - Casino Bonus must be claimed within 7 days • To withdraw bonus/related wins, wager bonus amount x40 within 14 days • Wagering req. vary by game • Withdrawal restrictions and Full T&C’s apply. 18+ begambleaware.org
Bet £10 Get £30 Free Bets
#AD Offer includes a free £1 Race Index spread bet to try out our exciting 50-25-10 race markets. Place a £10 fixed odds bet at minimum odds of 1/2. Get 2 x £10 free fixed odds bets + 2 x £5 free Winning Favourites spread bets. Bet with live streaming on all racing and greyhounds! Ts&Cs Apply. 18+ begambleaware.org
£35 Free Bet + 10 Free Spins
If your account has Sportsbook losses at the end of your first day's betting, QuinnBet will refund 50% of your losses as a Free Bet up to £35 (min 3 bets) Plus 10 Free Spins. Even if your account is up, you're guaranteed a £5 Free Bet Plus 10 Free Spins provided you place at least 1 bet of £10 or greater at the minimum odds. T&Cs apply | 18+ New UK Customers Only | BeGambleAware.org
50% Up To £50 Welcome Bonus
#AD 18+ begambleaware.org; New bettors get 50% of deposit up to £50; Once per household; Min deposit £15 (no Skrill/Neteller); Wager a total of 8 times deposit + bonus, with max qualifying bet stake equal to your initial bonus amount; Bonus expires after 60 days; Min odds of 4/5 on singles, or 2/5 per leg for acca; Some bet types excluded; See full terms.
Latest racing results
Dundalk
13:30
Full Result
1stRoyal Tribute
9/1
2ndMy Little Tip
5/1
3rdFox Leicester
18/1
Lingfield
13:25
Full Result
1stTyger Bay
15/2
2ndTotal Commitment
5/2
3rdHigh Velocity
10/1
Leicester
13:15
Full Result
1stGrozni
4/1
2ndNot A Light
9/2
3rdScamallach Liath
7/2CF
View All Today's Results