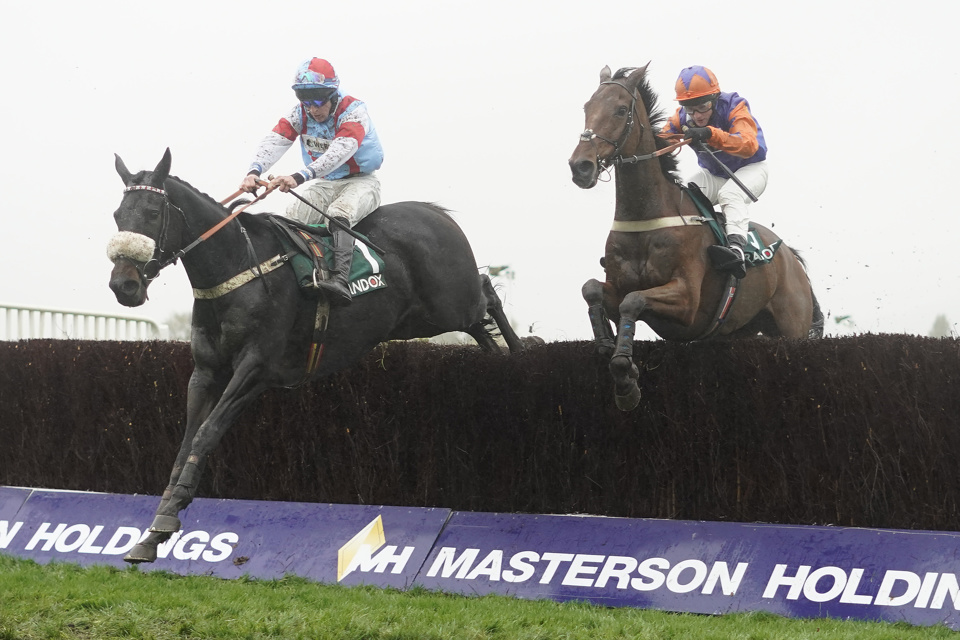 Eight horses have been entered for Saturday's Grade 1 Ascot Chase, which could be a hugely informative renewal that throws up some potential Ryanair Chase and Chetlenham Gold Cup clues for next month's Cheltenham Festival...

Paul Nicholls has trained the likes of Kauto Star, SIlviniaco Conti and Cyrname to victory in this contest, and the Ditcheat handler will saddle the classy Saint Calvados in Saturday's renewal, as the King George VI Chase third aims to enhance his Ryanair Chase claims with a win in this prestigious Ascot contest. Around a 5/2 chance with the bookmakers for Saturday's contest, Saint Calvados is one of the leading fancies for this event, and a win will certainly enhance his Cheltenham Festival claims. A 10/1 third favourite for the Ryanair Chase, Saint Calvados will need to improve hugely to down reigning Ryanair hero Allaho, who is a warm order, but a good performance at the weekend should book his place at the festival.

Nicky Henderson trained Riverside Theatre to back-to-back wins in 2011 and 2012 and he will be represented by the classy Mister Fisher (7/2), who was last seen beating the subsequent Denman Chase hero Eldorado Allen in the Silviniaco Conti Chase at Kempton, and the Seven Barrows raider is an eye-catching 14/1 for the Ryanair next month.

Last year's stunning winner Dashel Drasher (9/2) is aiming to emulate the abovementioned Riverside Theatre and win two on the spin in this contest, and he will be looking to improve on a second placed finish at Lingfield last time out.

Kim Bailey's Two For Gold was the one to beat Dashel Drasher in that Lingfield event last time out, and he has to be respected here, even though he's been installed a relative outsider at 14/1 for this mouth-watering renewal of the Ascot Chase, should the octet hold their ground at the declaration stage.

Runner-up in the 2021 Ryanair Chase, Fakir D'oudairies will be eager to reverse that form with Allaho and Joseph O'Brien's charge here adds an Irish spice to the contest, and on his day he is a real class act, and has to be respected.

One potentially using this contest as a springboard to Cheltenham Gold Cup glory on March 18 is Lostintranslation, who is 50/1 for the Gold Cup, but is only 8/1 for Saturday's event. A winner over course and distance in the 1965 Chase earlier in the season, Colin Tizzard's raider failed to follow up when fifth in the King George, but a return to the Berkshire venue should see him sparkle once again, and he's a leading player.

Venetia Williams has been in red-hot form on the big stage all season and in Fanion D'estruval she has one of her stable stars potentially taking his chance in this event and he's available at 4/1, while completing the entry list is the Christian Williams-trained Waiting Patiently, who has struggled of late and is likely to line up as the outsider of the field.