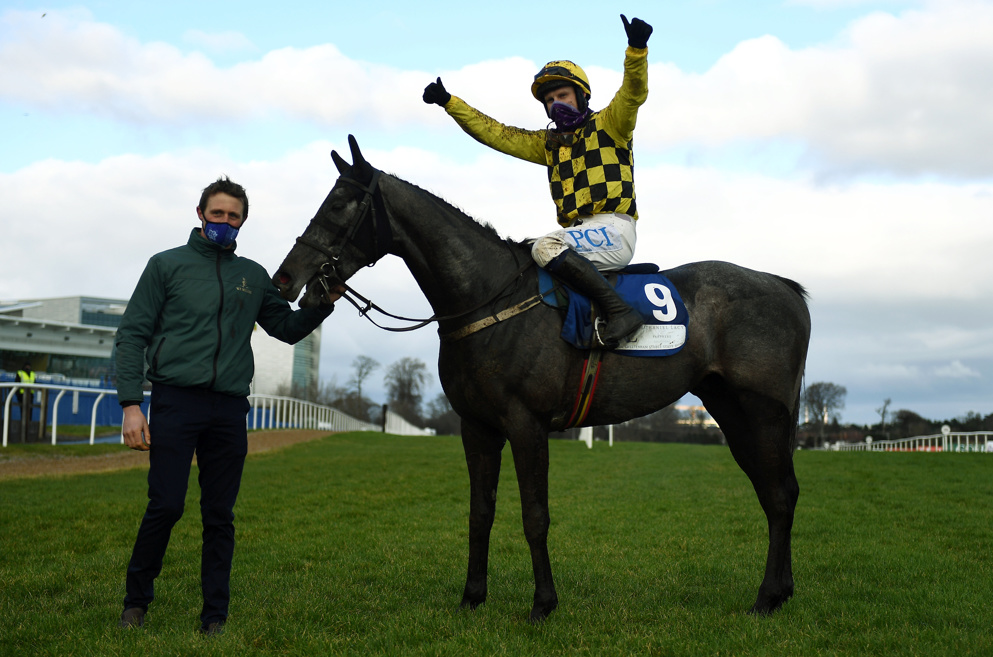 Tanya Stevenson gives her Ballymore Novices' Hurdle tip for a race that will see some exciting youngsters do battle on day two of the Cheltenham Festival...

Here’s hoping Day One was kind to you all and you’re ready to go again for another day of a rollercoaster of emotions and pure excitement.  This is a race that really suits the six-year-olds for 28 have won in 49 runnings in comparison to just 16 five-year-olds.  It is a race where 17 favourites have won at a strike rate of 34%.  Seven of the last ten winners have been Irish-trained.

Henry de Bromhead’s Bob Olinger has been very popular in various Cheltenham Festival previews in the lead up to this which has attributed to his price contracting, bullish words from those ‘in the know’ always help and confidence is strong with this one.  However, having watched the replay of his last run I’d hope he has improved again.  He did put six lengths between himself and Blue Lord who ran in the Supreme, but its down to personal choice whether you think that is more impressive than Gaillard Du Mesnil defeating Gentlemansgame by five lengths.

I tend to prefer the latter’s performance as he ground out the victory and for me got stronger running on from the last hurdle.  The style of his racing he is not the type to sit there ready to pounce he will start his run a fair way out which will make him very hard to pass.  Willie Mullins is going for his fifth win in the race.

It’s the smallest field in history of just seven, there are little imponderables surrounding all of them.  No surprise there are many fans of Bravemansgame, yet amazingly this is a race that Paul Nicholls has yet to win.  Another burden for the horse is Challow Hurdle winners have an atrocious record in the race as none have won from the last 16 that have tried.  He is a warrior and a determined sort so I won’t be holding a stat against him but its whether he is has progressed enough from that Newbury run 78 days ago or whether being off the track that long is too much.

Does He Know appeared to be promising winning twice at Cheltenham before running out at Newbury in the Challow, to me that was a loss of concentration rather than misbehaviour in my mind, but his Exeter run in harder to forgive.

Collecting my thoughts in what is an intimate field of runners and recollecting all that I’ve seen again and again in race replays, I’m going to go with Gaillard Du Mesnil.

A sporting selection with Sporting John at 13:55 in the Brown Advisory Novices' Chase, I was so impressed by him at Sandown that he only started to run on from just before the last, there is so much undiscovered improvement in him that he has been overlooked.

Heaven Help Us is my pick in the Coral Cup, she was seventh to Shishkin in last year’s Supreme, she won her maiden hurdle in Cheltenham in October and then last time won a really competitive race at Leopardstown.

#AD New UK customers (Excluding NI) mobile only. £30 in FREE Bets (FB) as £20 in sports bets & a £10 casino bonus (CB). Min stake £10. Min odds Evs. FB applied on 1st settlement of any qualifying bet. FB 7 day expiry. 1 FB offer per customer, household & IP address only. Payment restrictions. 14 days to accept £10 CB, then active for 3 days. CB 5x wagering & max redeemable £100. Game restrictions apply. Cashed out/Free Bets won’t apply. 30 days to qualify. 18+. T&Cs apply
get offer
Bet £10 get £30 in Free Bets
#AD New customers on mobile only. 7 days to claim and stake £10 minimum bet at odds of 1.5 or greater to qualify. Free, void, cashed out or partially cashed out bets do not qualify. Max 3x £10 free bets credited on bet settlement. Free bets must be used on 4 or more selections with selection odds of 1.3 or greater. Free bets are non-withdrawable, and stake not returned with winnings. 7 day expiry. 18+BeGambleAware.org. T&Cs apply.
Double the odds, any sport, any bet, any odds!
#AD 18+ begambleaware.org Only valid for new registrations to Grosvenor Existing members do not qualify, Bet must be placed using real money in combination with the Odds Boost Token, Offer applies to Sport bets only. Max stake is £10. Each way bets are a maximum of £5 each way (£10 total). Customers have 60 days after registration to use the Odds Boost token. T&Cs apply.
Bet £20 & Get it Back As CASH If It Loses
#AD New customers only. Place your FIRST bet on any Horse Racing market and if it loses we will refund your stake in CASH. Max refund for this offer is £20. Only deposits made using cards will qualify for this promotion. T&Cs apply.
Welcome Offer
#AD Bet £10 & Get £50 in Free Bets for new customers at bet365. Min deposit requirement. Free Bets are paid as Bet Credits and are available for use upon settlement of bets to value of qualifying deposit. Min odds, bet and payment method exclusions apply. Returns exclude Bet Credits stake. Time limits and T&Cs apply. The bonus code SPTS365 can be used during registration, but does not change the offer amount in any way.
Bet £10 Get £30 In Free Bets
#AD 18+. Play Safe. New customers using Promo code R30 only, Min £10/€10 stake,  min odds 1/2, free bets paid as 3 x £10/€10, free bets credited after settlement of first qualifying bet, free bets will expire 30 days after the qualifying bet is placed, payment method/player/country restrictions apply.
Bet £20 & Get it Back As CASH If It Loses
#AD 18+ begambleaware.org Max £20 refund on first bet. Bet must be placed in first 7 days of account opening. Only deposits made via Debit Card will be eligible for the promotion. T&Cs apply.
Bet £10 Get £60 in Bonuses
#AD New UK customers only. Register using the promo code BETFRED60, deposit and place first bet of £10+ on Sports (cumulative Evens+) within 7 days of registration. First bet must be on Sports. £20 in Free Bets to be used on Sports, £10 in Free Bets to be used on Lotto and 50 Free Spins (20p per spin) credited within 48 hours of bet settlement. Further £20 in Free Bets credited 5 days after settlement. Bonuses have a 7-day expiry. Payment restrictions apply. SMS verification and/or Proof of I.D and address may be required. Full T&Cs apply.
Bet £10 Get £30 Free Bets (APP Only)
#AD New UK, IE & Malta customers only. 18+. Min £10/€10 first deposit using Debit Card or Trustly. Place a bet of £10 at min odds of 1.5. Free bets expire in 90 days. Full T&Cs apply.
Bet £10 Get £30 Free Bets + £10 Casino Bonus
#AD Minimum deposit of £10 using deposit code 30F - A qualifying bet is a ‘real money’ stake of at least £10 placed on any sports market - Minimum odds of 1/2 (1.5) - Free bets credited upon qualifying bet settlement and expire after 7 days - Free bet stakes not included in returns - Casino Bonus must be claimed within 7 days • To withdraw bonus/related wins, wager bonus amount x40 within 14 days • Wagering req. vary by game • Withdrawal restrictions and Full T&C’s apply. 18+ begambleaware.org
Bet £10 Get £30 Free Bets
#AD Offer includes a free £1 Race Index spread bet to try out our exciting 50-25-10 race markets. Place a £10 fixed odds bet at minimum odds of 1/2. Get 2 x £10 free fixed odds bets + 2 x £5 free Winning Favourites spread bets. Bet with live streaming on all racing and greyhounds! Ts&Cs Apply. 18+ begambleaware.org
£35 Free Bet + 10 Free Spins
If your account has Sportsbook losses at the end of your first day's betting, QuinnBet will refund 50% of your losses as a Free Bet up to £35 (min 3 bets) Plus 10 Free Spins. Even if your account is up, you're guaranteed a £5 Free Bet Plus 10 Free Spins provided you place at least 1 bet of £10 or greater at the minimum odds. T&Cs apply | 18+ New UK Customers Only | BeGambleAware.org
50% Up To £50 Welcome Bonus
#AD 18+ begambleaware.org; New bettors get 50% of deposit up to £50; Once per household; Min deposit £15 (no Skrill/Neteller); Wager a total of 8 times deposit + bonus, with max qualifying bet stake equal to your initial bonus amount; Bonus expires after 60 days; Min odds of 4/5 on singles, or 2/5 per leg for acca; Some bet types excluded; See full terms.
Latest racing results
Dundalk
19:30
Full Result
2ndSeattle Creek
10/1
3rdCursory Exam
12/1
4thCozone
11/2F
Newcastle
19:15
Full Result
1stBlazing Son
11/4
2ndHighjacked
22/1
3rdWhiteandblue
20/1
Dundalk
19:00
Full Result
1stCapuchinero
6/1
2ndUn Bacio Ancora
18/1
3rdDiamondsinthesand
15/2
View All Today's Results