Cheltenham Gold Cup Trends: All the vital stats ahead of the festival showpiece 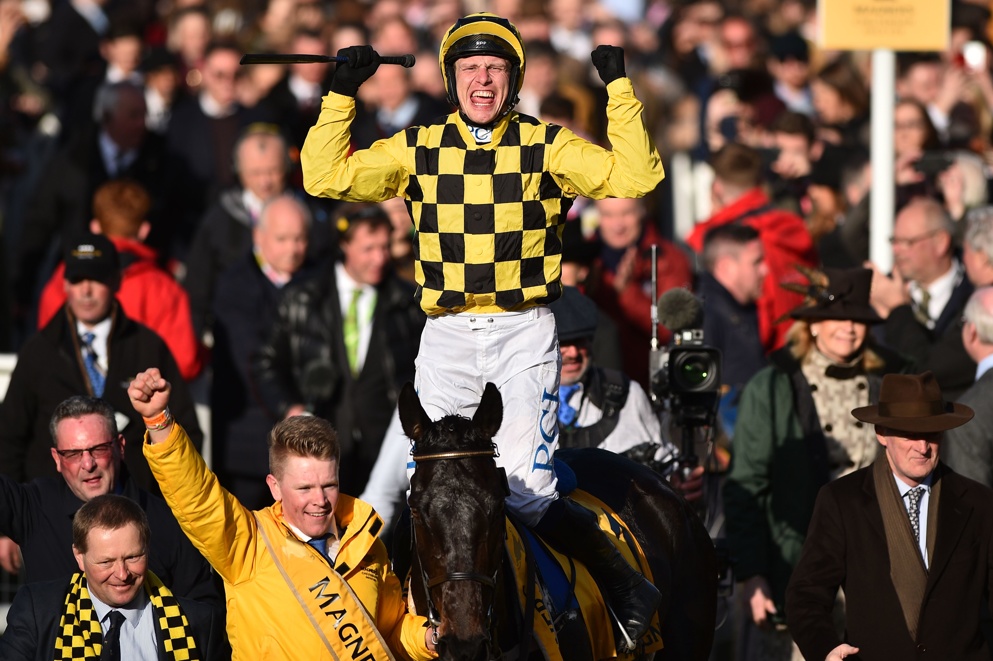 Al Boum Photo is set to bid for a third Cheltenham Gold Cup win on March 18.

We are set for one of the most competitive Cheltenham Gold Cup showpieces in recent times, as a plethora of horses will fancy claiming victory in the Cheltenham Festival showpiece on March 18. Many punters will take a look back at the history of the race for any pointers, and here we pick out some eye-catching trends that could help you pick the winner of the feature contest on the last day of the meeting...

The Cheltenham Gold Cup is the ultimate test for a racehorse, and in recent times it has seen the older generation - those in double-figures in the age bracket - struggle in the 3m 2f 70y event. Since 2000 every winner of the race has been aged between six and nine - with the solitary six-year-old winner being Long Run, who bounded to glory over old stalwarts Kauto Star, Denman and Imperial Commander in an epic 2011 Gold Cup. So, over the last 20 years it's been horses aged seven to nine that have stormed to victory, with, incidentally, the last ten-year-old winner coming back in 1998 when Cool Dawn won the prize.

Dual Gold Cup winner Al Boum Photo is set for another crack at this year's event, but the Willie Mullins-trained raider has now reached ten years old, so history suggests he may struggle, while the former runner-up Santini is another that heads into the event as a ten-year-old, so could well find it tough.

The Cheltenham Gold Cup is a race that attracts only the elite staying chasers, so many of the leading contenders have already shown to be top class performers and have most likely tasted Graded success before lining up in the race. In recent years it has proven beneficial to head to the Cheltenham Festival in good form and nine of the last 12 winners of the race had won on their previous outing.

Prior to Minella Indo last year, the last horse to not taste victory in the race before his Cheltenham Gold Cup win was Lord Windermere back in 2014, so the six winners between them have been victorious in their prep run for Cheltenham, which is a huge positive for the likes of Galvin, Chantry House, Protektorat and Tornado Flyer, who all got their heads in front last time out. For those fancying reigning champion Minella Indo and last year's runner-up A Plus Tard then they will have to hope they can break the recent trend, as they both suffered defeat on their last racecourse visit.

One thing that Cheltenham racecourse provides for a racehorse is a real test of stamina, as the undulating track and the tough uphill run-in can often find holes is even the finest of equine talents. Well, not only is Cheltenham form crucial to have with six of the last 12 winners having tasted victory at Cheltenham prior to their Gold Cup wins, as the likes of Denman, Bobs Worth, Lord Windermere (All RSA) and Native River (NH Chase) have all won over fences before winning their Gold Cups, but with previous experience comes a chance for the horses to get accustomed with the atmosphere and cacophonous noise that comes with a festival.

Last year's winner Minella Indo has previous festival winning form as he was a winner of the Albert Bartlett Novices' Hurdle earlier in his career, while Gordon Elliott's Galvin won the National Hunt Chase last season, so will be aiming to emulate the mighty Native River. Chantry House won the Marsh Novices' Chase last season, while Al Boum Photo is another prominent figure in the betting with proven festival form.

Back in 1990 100/1 outsider Norton's Coin defeated the legendary Desert Orchid to become the biggest-priced winner in the history of the race, but in recent times it has often seen the more fancied contenders coming out on top with their only being two double-figured priced winners since the turn of century (Lord Windermere 20/1 in 2014) and Al Boum Photo (12/1 in 2019). In that time since 2000 there have been nine winning favourites, with the majority of the winners coming from the first few in the betting.

Minella Indo was a 9/1 winner to win the event 12 months ago, and he's about half that price to claim glory once again, while others towards the head of the market include A Plus Tard, Galvin, Protetkorat and Al Boum Photo the only other challengers available at single-figured odds. While there's some obvious quality beyond that top five in the betting, that quintet could be potentially a cut above, and it's hard to see that stat on single figured priced winners being hit hard in 2022.

Official ratings can provide some vital information on a horse's chances in the Cheltenham Gold Cup, and it's usually a race that does see class prevail, as 11 of the last 12 winners have been rated 164 or higher, with Lord Windermere (rated 152) the only horse that didn't fit in that bracket. Of those 11 rated 164+ five were actually rated 170 or more, and there are three contenders that head into the Gold Cup with a 170+ rating.

A Plus Tard heads the ratings at 174, while Minella Indo is 1lb lower with a mark of 173, while the third in the bracket is the dual winner Al Boum Photo, who has a current BHA rating of 170. Irish-trained duo Galvin and Tornado Flyer are next in the ratings with 167, but with both having won impressively last time out then they could both be capable of an improvement on those numbers.

#AD New UK, IE & Malta users only. Min. £10/€10 first deposit only using Debit Card or Trustly. Free bets expire in 90 days. T&Cs apply.
get offer
Bet £10 Get £30 In Free Bets
#AD 18+. Play Safe. New customers using Promo code H30 only, Min £10/€10 stake,  min odds 1/2, free bets paid as 2 x £15/€15, free bets credited after  settlement of first qualifying bet, free bets will expire 30 days after  the qualifying bet is placed, payment method/player/country restrictions apply.
Welcome Offer
#AD Bet £10 & Get £50 in Free Bets for new customers at bet365. Min deposit requirement. Free Bets are paid as Bet Credits and are available for use upon settlement of bets to value of qualifying deposit. Min odds, bet and payment method exclusions apply. Returns exclude Bet Credits stake. Time limits and T&Cs apply.
Bet £20 & Get It Back As CASH If It Loses
#AD New customers only. Place your FIRST bet on any Horse Racing market and if it loses we will refund your stake in CASH. Max refund for this offer is £20. Only deposits made using cards will qualify for this promotion. T&Cs apply.
Bet £10 Get £60 in Bonuses
#AD New UK customers only. Register using the promo code BETFRED60, deposit and place first bet of £10+ on Sports (cumulative Evens+) within 7 days of registration. First bet must be on Sports. £20 in Free Bets to be used on Sports, £10 in Free Bets to be used on Lotto and 50 Free Spins (20p per spin) credited within 48 hours of bet settlement. Further £20 in Free Bets credited 5 days after settlement. Bonuses have a 7-day expiry. Payment restrictions apply. SMS verification and/or Proof of I.D and address may be required. Full T&Cs apply.
Money Back As Cash Up To £20
#AD Max £20 refund on first bet. Bet must be placed in first 7 days of account opening. Only deposits made via Debit Card will be eligible for the promotion. T&Cs apply. 18+ begambleaware.org
Bet £10 Get £20 In Free Bets
#AD Min stake £10. Min odds 1/2 (1.5). First bet only. Free bets expire in 7 days. Cashed out bets won’t apply. Payment method restrictions. Online UK customers only. 30 days to qualify for £20 in Free Bets. 18+. T&Cs apply
Bet £10 Get £30 Free Bets + £10 Casino Bonus
#AD Minimum deposit of £10 using deposit code 30F - A qualifying bet is a ‘real money’ stake of at least £10 placed on any sports market - Minimum odds of 1/2 (1.5) - Free bets credited upon qualifying bet settlement and expire after 7 days - Free bet stakes not included in returns - Casino Bonus must be claimed within 7 days • To withdraw bonus/related wins, wager bonus amount x40 within 14 days • Wagering req. vary by game • Withdrawal restrictions and Full T&C’s apply. 18+ begambleaware.org
Get £36 In Free Bets
#AD Offer includes a free £1 Race Index spread bet to try out our exciting 50-25-10 race markets. Bet with live streaming on all racing and greyhounds! Place a qualifying £25 fixed odds bet at odds of 1/2 or greater. Qualifying bet cannot be placed in-play or cashed out early. A first free £5 fixed odds bet will be credited upon settlement of the qualifying bet. 4 x following £5 free fixed odds bets will be added to your account on consecutive days. BeGambleAware.org. 18+. T&Cs apply
£25 Free Bet + 10 Free Spins
If your account has Sportsbook losses at the end of your first day's betting, QuinnBet will refund 50% of your losses as a Free Bet up to £25 (min 3 bets) Plus 10 Free Spins on Asgard Warriors. Even if your account is up, you're guaranteed a £5 Free Bet Plus 10 Free Spins provided you place at least 1 bet of £10 or greater at the minimum odds. T&Cs apply | 18+ New UK Customers Only | BeGambleAware.org
Latest racing results
Warwick
14:55
Full Result
1stQuid Pro Quo
13/8JF
2ndGalahad Threepwood
13/8JF
3rdMasteroftheheights
13/2
Ayr
14:45
Full Result
1stImpressor
100/30JF
2ndTar Heel
9/2
3rdKodebreaker
11/1
Yarmouth
14:35
Full Result
1stVictory Star
5/2F
2ndMitigator
7/2
4thGlobal Art
12/1
View All Today's Results