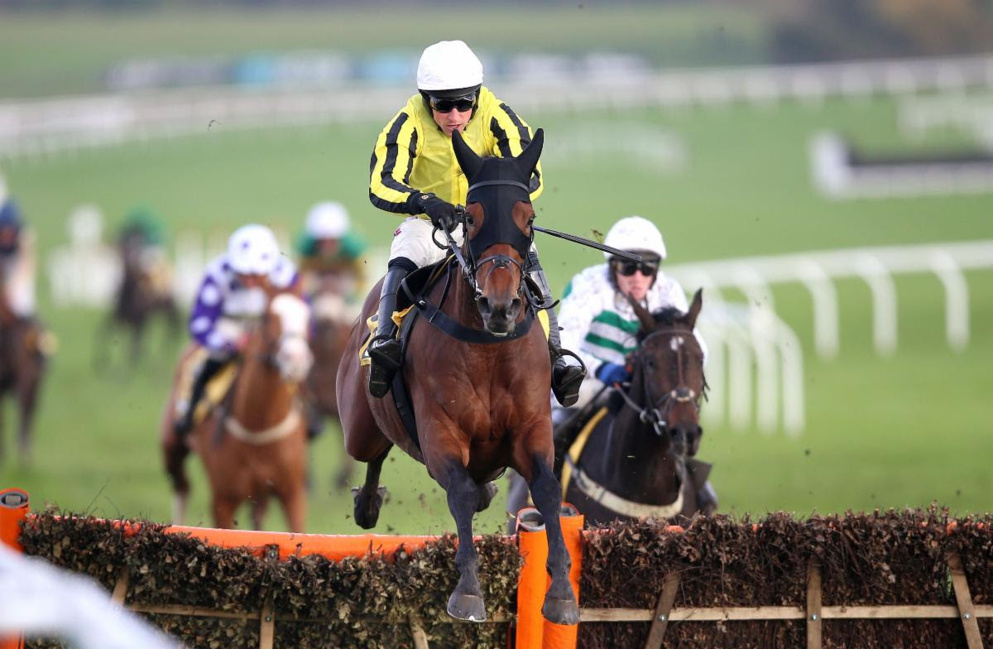 Allmankind is entered to run at Cheltenham on Saturday.

With the two-day Showcase meeting taking place at Cheltenham on Friday and Saturday, Steve Chambers has picked out five horses to watch, who could potentially make waves at the Cheltenham Festival in the spring...

Cheltenham racecourse will kick off their season of stunning National Hunt action later this week, as the two-day Showcase meeting will take place behind closed doors, and it's often been a meeting targeted by a host of horses that hold ultimate goals of winning at the Cheltenham Festival in March.

With less than five months to go until the start of the Festival, trainers will already have a plan pencilled in for their star performers, and a run on Friday or Saturday could well be the starting point for many, and five horses have caught our eye ahead of the two-day jumping extravaganza at Prestbury Park.

A gallant runner-up behind Imperial Aura in the Novices' Handicap Chase at the Cheltenham Festival in March, Galvin then went on to notch up a trio of novice chase wins, with the latter of that trio coming in Grade 3 company. A real revelation over fences, the six-year-old is entered for the Matchbook Better Way To Bet Novices' Chase at 14:25 on Friday, where he could lock horns with the Nigel Twiston-Davies-trained Mossy Fen and Fergal O'Brien's Ask Dillon.

Currently trading as the ante-post favourite for the National Hunt Chase at the 2021 Cheltenham Festival, Galvin has an alternative option to run at Cork in early November, but Gordon Elliott will make his decision as to where he will send his smart prospect, but if he does line up at Cheltenham he will be one to watch on Friday afternoon.

Nicky Henderson's Fusil Raffles failed to land any sort of blow in last season's Champion Hurdle, as the Seven Barrows inmate could only finish tenth of 17 behind Epatante, but the five-year-old is now embarking on a novice chasing campaign, which could prove to be a fruitful one. Having kicked off the new discipline with a comfortable win at Uttoxeter last month, Fusil Raffles is now set to put his potential Arkle Challenge Trophy credentials on the line at Cheltenham during the Showcase meeting.

Around a 25/1 shot for the Arkle, Fusil Raffles has two entries at Cheltenham, with his first coming in the squareintheair.com Novices' Chase on Friday. That two-mile contest was won 12 months ago by smart Nigel Twiston-Davies-trained raider Al Dancer, so it's often won by a decent novice. Alternatively, Fusil Raffles has an entry for the Best Odds At Matchbook Novices' Chase on Saturday, which is run over a trip just shy of two and a half miles, so were he to run in that then Henderson could well have the Marsh Novices' Chase as the ultimate Cheltenham Festival plan.

One of the most exciting juveniles during the 2019/20 campaign, Dan Skelton's Allmankind is set to make his hotly-anticipated return to the track, and connections will be hoping that the four-year-old could shape up into a Champion Hurdle contender. A division that lacks significant depth, the Champion Hurdle could be wide open this season and Allmankind will be looking to throw his name into the hat. Available at 50/1 for the Champion Hurdle at the time of writing, Allmankind could be a whole lot shorter in the betting if he wins impressively in Saturday's Masterson Holdings Hurdle at 14:05.

Sent off a 7/2 shot for last season's Triumph Hurdle, Allmankind led for most of the way before being swamped by the smooth-travelling Goshen. But, a final flight tumble from Gary Moore's charge left the race wide open, but Allmankind was unable to find any more up the hill and he had to settle for third spot behind Burning Victory and Aspire Tower. The Skelton team will hope he can sparkle on his comeback run this weekend and duly throw his hat into the Champion Hurdle picture.

Former Ryanair Chase hero Frodon could return to the venue of his greatest career victory, as the Paul Nicholls-trained superstar is entered for the Matchbook Betting Exchange Handicap Chase, which is off at 14:05 on Saturday afternoon. Installed as a second favourite for Saturday's contest, Frodon will have tougher tasks later on in the season, but with such a fine record around the undulations of GL50, he has to be a leading player if lining up.

The 2019 Ryanair Chase winner is available around the 33/1 mark for a repeat victory in that Grade 1 in March, and having finished fourth in the 2020 renewal, the ultra-consistent eight-year-old is set for another campaign aimed at the 2m 5f showpiece on the third day of the Cheltenham Festival. Saturday's outing could be used to blow away the cobwebs ahead of some stiffer assignments during the winter, but the classy performer in the field this weekend should mean he finishes in a prominent position.

What a moment for the sport! @FrostRacingClub

In the last 30 days Paul Nicholls has amassed 18 winners from his 52 runners, and while Frodon could well be his proven star at Cheltenham during the Showcase meeting, he will also saddle a host of potential future talents. One of those that could light up this year's season is Ask For Glory, who is entered in the Showcase Novices' Hurdle, which is off at 16:25 on Saturday.

With the ultimate goal this season to send him novice chasing, Nicholls could give his six-year-old one final spin over hurdles, and after he showed his ability over the smaller obstacles last time out when winning by 23 lengths at Wincanton, Ask For Glory could be a leading figure in Saturday's contest. Despite having yet to jump a fence in public in Britain, Ask For Glory has already been given a speculative price of 40/1 for the 2021 RSA Chase, so the bookmakers are certainly not testing their luck with the son of Fame Of Glory. A promising performance on Saturday will certainly his enhance his reputation, and he is another runner to keep a significant eye on during the two-day Cheltenham meeting.