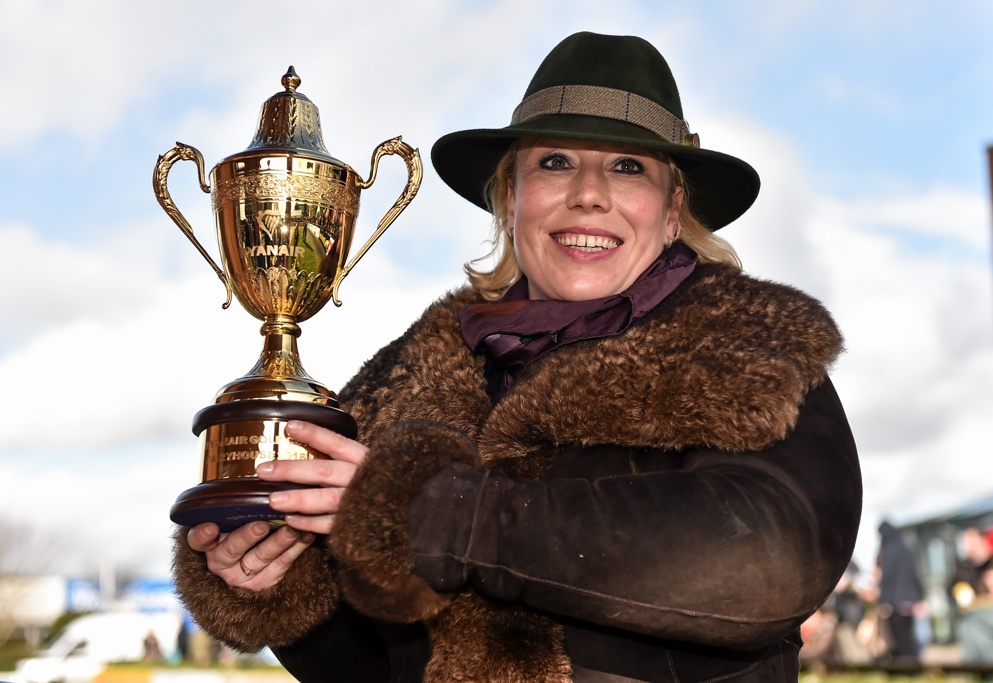 Kerry Lee won the Classic Chase in 2016 with Russe Blanc.

Nick Seddon previews Saturday's Classic Handicap Chase at Warwick, a race which often acts as a good pointer for the Grand National at Aintree, and recommends a bet...

Run over a distance of three miles and five furlongs, it's certainly fair to say that the Classic Chase is one of the sternest examinations of stamina in the calendar, so it is no surprise that runners who do well here tend to then have the Grand National on their agenda in the spring - with One For Arthur winning both races in 2017 for Lucinda Russell.

It generally takes a smart stayer to win this Grade 3 handicap, and several of this year's 13-strong field will almost certainly have aspirations of heading to Merseyside in April, beginning with the dual Becher Chase winner Walk In The Mill. He failed to complete on his hat-trick bid in December, however, falling at The Chair, and he lines up off a tough mark here - one that's 8 lb higher than for his second Becher success. He certainly won't be lacking for stamina, and would be a threat if bringing his best form to the table, but it seems likely that he's being tuned up for the spring here.

Another with Aintree ambitions is Le Breuil, whose last win came in the 2019 renewal of the National Hunt Chase at the Cheltenham Festival. He's shaped well on a couple of occasions since, including when fifth in this race last year, and he's down to the sort of mark which would require him to win a race of this nature if he is to secure his place at the National. He ran well to finish third in last month's Becher, and it would be no surprise to see him put up a bold bid, though he's proven rather expensive to follow and is passed over at a single-figure price.

Meanwhile, the current market leader is Notachance, who represents the Alan King operation. A useful novice last year, he looked a useful recruit to this sphere when making a winning reappearance over three miles at Bangor in November, form which has worked out well since. He's a lightly-raced type as a seven-year-old, and he ought to go well here off his current mark, with the extra five furlongs or so likely to suit.

However, the best option looks to be Storm Control. He represents Kerry Lee, who won this in 2016 with Russe Blanc, and he's looked an improved model in two starts since being stepped up to three miles this term, winning back-to-back races at Cheltenham. Admittedly, he tied up quite badly in the closing stages of his most recent success, though he appeared to be idling rather than running out of puff that day, and found more when joined by his rivals in the dying strides. Raised 5 lb for that success, he still looks to be on a workable mark, and bearing in mind that he could well find more now stepped up further in trip, he's fancied to find the necessary improvement to go in again.

Storm Control idles up the run-in, but finds more to defeat Potters Legend & Court Maid in a thriller to land this £40,000 prize at @CheltenhamRaces for @beaubai & Richard Patrick https://t.co/D4isDx2MIK

Also prominent in the market is Captain Chaos, who is trained by Dan Skelton. He's a smart performer on his day, with his standout effort coming when winning last season's Grimthorpe Chase at Doncaster in emphatic fashion, though he's disappointed on each of his three starts so far this season. He's back down to his last winning mark as a consequence, and would be a threat if in the mood, but he can't be backed with any confidence at the minute - a comment which also applies to both Ballyoptic and Petite Power.

Four more to consider are Achille, Late Romantic, The Hollow Ginge and Django Django. The first-named is pretty lightly-raced for an eleven-year-old, and enjoyed an excellent time of things last season, winning on three occasions over three miles. He produced another good effort to finish third on reappearance in November, and could find more over this trip, though this is a big ask from out of the handicap. Similar comments apply to Django Django, who's struggled so far this term but would have claims on his best form, while The Hollow Ginge was an excellent fourth in the Ladbrokes Trophy at Newbury in November, but has failed to complete on his two other starts this campaign.

More interesting is Late Romantic, who returned to winning ways in a veterans' chase at Haydock last month. That was a useful effort, and he isn't one to totally rule out up 5 lb here considering that he will stay the trip, though he'd likely need a career best for win purposes. The field is completed by Didero Vallis and Red Infantry, both of whom will need to show a lot more than they have been doing so far this season if they are to make their presence felt, and with that in mind it is Storm Control who appeals as the best option.