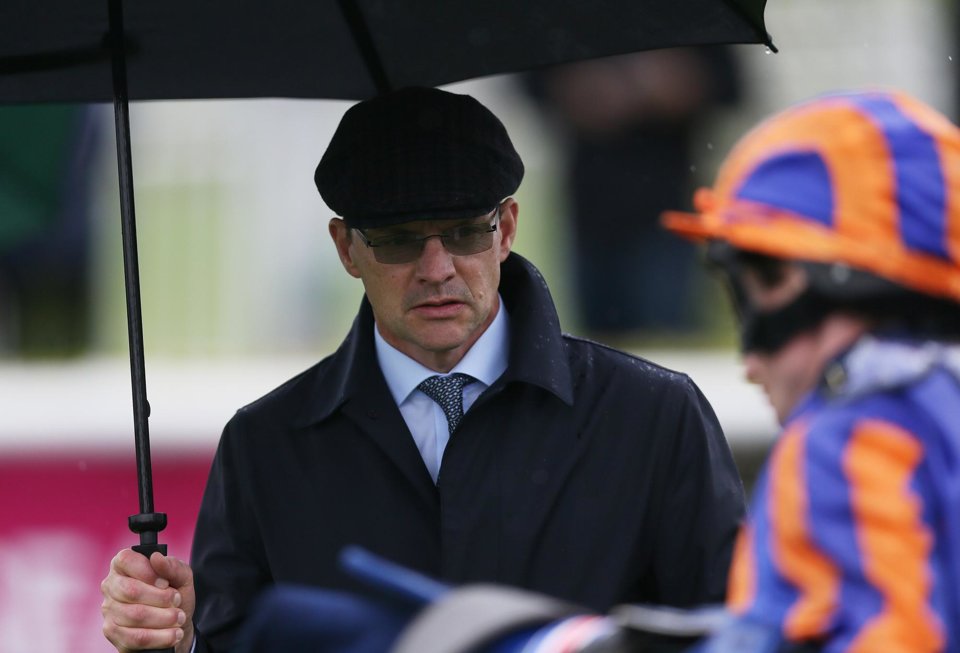 Aidan O'Brien can land his ninth win in the Coronation Cup on Friday.

Steve Chambers previews the 2020 Coronation Cup, which has been switched from Epsom to Newmarket on Friday, and sees a field of seven head to post for the Group 1 showpiece...

Flat racing will ignite pretty quickly following racing's resumption on Monday, and Friday will see the first Group 1 of the season take place at Newmarket, as HQ hosts the rearranged Coronation Cup, which has attracted a stellar line-up. Usually a race seen at the Investec Derby meeting at Epsom, the Coronation Cup has been rescheduled for Newmarket, and the 1m 4f showpiece will see the return of last year's Derby hero Anthony Van Dyck, who is one of two contenders for Aidan O'Brien.

However, it's the Charlie Appleby-trained Ghaiyyath that has been installed as the clear favourite for this event, having won in Group 3 company when last seen at Meydan in February. The Dubawi colt eased to victory in Dubai that day, and recaptured the form that saw him sent off a 17/2 shot for the Prix de l'Arc de Triomphe at the back end of last season. He was unable to land a blow in the French showpiece - finishing tenth of 12 - but Ghaiyyath has shown he has the ability to perform at the top level - winning a Group 1 contest in Germany in breathtaking style last September.

Ghaiyyath also has some fine Newmarket form to his name having won a brace of races during his juvenile campaign, including the Group 3 Autumn Stakes. However, despite having some smart form in the book and the potential to improve this season, his current odds of a shade of odds-against looks far too short in a race awash with strength in depth, and he could be worth taking on as a consequence.

He's back! Ghaiyyath is a class apart as he storms to victory to take today's Meydan opener under William Buick for Charlie Appleby and @godolphin… https://t.co/Gf9QU3BAWl

Roger Varian's Defoe will make his hotly-anticipated return here, and the six-year-old will aim to emulate the mighty St Nicholas Abbey by winning back-to-back renewals of the Coronation Cup. Slicing through the field to claim the prize at Epsom last season, Defoe followed that win up with victory in the Hardwicke Stakes at Royal Ascot, but like Ghaiyyath he failed to land a significant blow in the Arc, before returning at Meydan with a lacklustre display when finishing second as a short-priced favourite.

He undoubtedly has the ability to feature prominently at the highest level, but Defoe is a horse that has blown more cold than hot in recent seasons, and he is worth taking on in this fascinating renewal.

Eight-time winner of the race Aidan O'Brien will unleash a dazzling duo for this, and the Ballydoyle pairing will be spearheaded by last year's Derby hero Anthony Van Dyck, who is aiming to taste victory for the first time since his classic success. The Galileo colt just prevailed in a blanket finish to last year's Epsom blue riband, but has failed to get his head in front since, and he was beaten in each of the Irish Derby, King George and Irish Champion Stakes in the second half of the season.

So, with questions hanging over him in terms of whether he can produce the goods on the biggest stage once again, it seems best to avoid him and it's the other O'Brien challenger that makes more appeal here, in the form of Broome.

Fourth behind stablemate Anthony Van Dyck in last year's Derby, Broome then struggled to shine in the Irish Derby, where he finished sixth of eight. However, he can be forgiven that run as he played up in the stalls and was slow away, meaning that he was always facing an uphill task.

The son of Australia is entitled to improve for another winter on his back, and with Ghaiyyath likely to set a decent gallop on the front end from the flag fall, that could play into Broome's hand, who will relish this 1m 4f test, and he could be doing all his best work in the final stages. Available at a double figure price at the time of writing, Broome certainly marks the value play at this stage, and could cause a shock by landing the spoils.

At the twelfth time of asking, Seamie Heffernan wins the 2019 @Investec Derby on Anthony Van Dyck for an historic seventh win in the race for trainer Aidan O'Brien

Arguably the most eye-catching runner is the staying star Stradivarius, who drops back to 1m 4f for the first time in over three years and aims to enhance his already glittering CV. The multiple Group 1 winner could well just be being given a blowout by his trainer John Gosden ahead of the Gold Cup at Royal Ascot in a few weeks time, but the six-year dour stayer has proven to be a top-class performer in recent times, and should some of his younger adversaries fail to fire, he could well pick up the pieces.

Like Broome he is sure to be doing his best work in the closing stages, but you have to feel that Stradivarius just may lack that bit of acceleration at the crucial stage of the race, and while he is challenging for second favouritism alongside Defoe, it's hard to see him getting another win on his record here.

Meanwhile, David Simcock's Desert Encounter was well beaten by Ghaiyyath when they clashed at Meydan a few months ago and there's no suggestion that he can turn the form around with market leader here, while Alounak completes the field of seven. Andrew Balding's charge was beaten by the aforementioned Desert Encounter in a Canadian Group 1 last October, and with that form not looking as strong as some of the other form lines on offer, the unfancied duo may have to settle for the minor honours.

A mouth-watering renewal of the rearranged Coronation Cup will serve up a thriller, but Broome can cause a huge shock at Newmarket on Friday and propel himself into the limelight with a win in the first British Group 1 of the season.