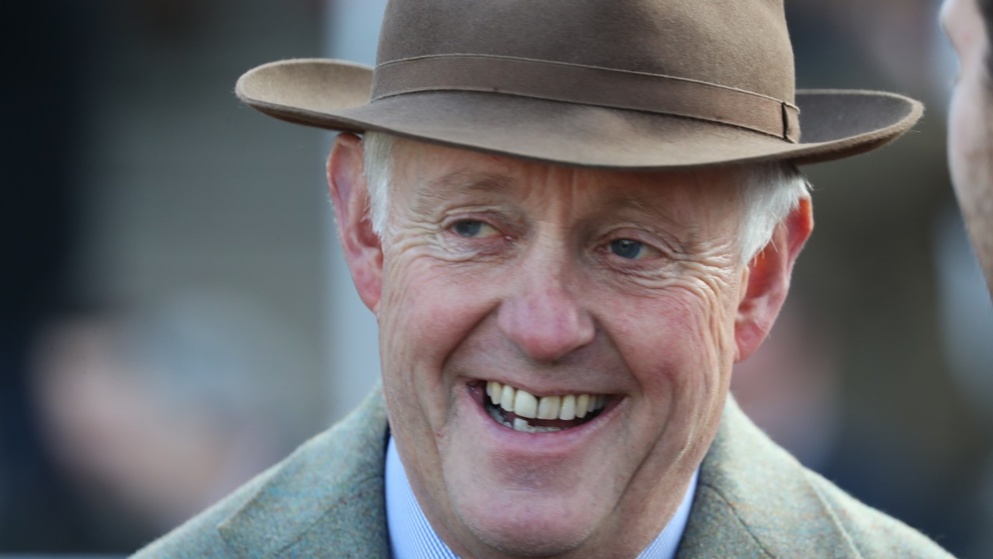 A stellar field will assemble at the 2m 4f 127y start for the 2021 Racing Post Gold Cup, and it's set to be a hugely competitive betting heat for punters to get stuck into, and we preview the race here...

Paul Nicholls has trained the winner of this race on five separate occasions, with Poquelin and King George VI Chase hero Frodon both claiming glory twice, and the Ditcheat handler will aim to make it a super sixth victory on Saturday afternoon, and his hopes lie with Lalor, who heads the betting, at the time of writing.

Last seen finishing a staying-on third behind Midnight Shadow and Protektorat in the Paddy Power Gold Cup last month, Lalor will be hoping that he can turn the form around with Midnight Shadow, who will have a significant hike in the weights to deal with for Sue Smith. With a 5lb weight pull over Midnight Shadow from their last clash, Lalor has a terrific chance to reverse the form, but Midnight Shadow was hugely impressive last time out, and it would be no surprise to see him go close here, and he can frank the form with Lalor.

The aforementioned Protektorat has since catapulted into the Cheltenham Gold Cup picture following a fine win in the Many Clouds Chase at Aintree, so the Paddy Power Gold Cup form is rock-solid, and another placed horse that caught the eye was the Philip Hobbs-trained Dostal Phil, who could be worth backing here.

Storming up the Cheltenham hill in the closing stages of the Paddy Power Gold Cup, DOSTAL PHIL shaped like he could be close to a winnable mark, and having only been upped 1lb by the handicapper for that fine fourth-placed finish last month then he can strike here. He has winning form in heavy going, so the recent rain to hit the track won't pose him any problems, and should he be able to stay closer to the leaders as they come down the hill at the business end of the race, then he can duly propel clear in the closing stages and bag the prize for Hobbs and owner JP McManus, who last won this race back in 2011 with Quantitativeeasing.

A former winner of the Paddy Power Gold Cup, Coole Cody was last seen falling in the 2021 renewal last month, but was still in without a shout, so could play a notable role here. However, he's 6lb higher than his Paddy Power win from 2020, so needs a career best to get his head in front.

Fergal O'Brien's Silver Hallmark is very lightly-raced over fences - having only run four times over the larger obstacles - but he was last seen finishing a creditable fourth in the Colin Parker Memorial at Carlisle, and he has the capabilities of figuring here, while the Venetia Williams-trained duo of the top-weighted Cepage and Farinet are both notable contenders.

Of the others, Nicky Henderson's Fusil Raffles was a lucky winner of the Charlie Hall Chase last time out, as he made the most of Shan Blue's fall, and he will drop back into handicap company here, so is of interest. Former Cheltenham Festival winner Siruh Du Lac will return to the venue of his biggest win, and he's now only 2lbs higher than the mark he claimed festival glory off of, so is worthy of a second look at double-figured odds.

One final contender that could play their part is Hobbs's other runner Zanza, who was sixth in the Paddy Power Gold Cup and has only been upped 1lb for that decent run, so could be another to emerge from November's showpiece event that can challenge for glory here.

However, it's Dostal Phil that left a lasting impression in the aftermath of the Paddy Power Gold Cup, and Aidan Coleman can duly pilot him to victory in fine style.

Pulled Up
7/1
Cheltenham Odds
Cheltenham Tips: Check out our best bets for Friday on ITV Racing
By Steve Chambers

#AD New UK customers (Excluding NI) mobile only. £30 in FREE Bets (FB) as £20 in sports bets & a £10 casino bonus (CB). Min stake £10. Min odds Evs. FB applied on 1st settlement of any qualifying bet. FB 7 day expiry. 1 FB offer per customer, household & IP address only. Payment restrictions. 14 days to accept £10 CB, then active for 3 days. CB 5x wagering & max redeemable £100. Game restrictions apply. Cashed out/Free Bets won’t apply. 30 days to qualify. 18+. T&Cs apply
get offer
Bet £10 get £30 in Free Bets
#AD New customers on mobile only. 7 days to claim and stake £10 minimum bet at odds of 1.5 or greater to qualify. Free, void, cashed out or partially cashed out bets do not qualify. Max 3x £10 free bets credited on bet settlement. Free bets must be used on 4 or more selections with selection odds of 1.3 or greater. Free bets are non-withdrawable, and stake not returned with winnings. 7 day expiry. 18+BeGambleAware.org. T&Cs apply.
Double the odds, any sport, any bet, any odds!
#AD 18+ begambleaware.org Only valid for new registrations to Grosvenor Existing members do not qualify, Bet must be placed using real money in combination with the Odds Boost Token, Offer applies to Sport bets only. Max stake is £10. Each way bets are a maximum of £5 each way (£10 total). Customers have 60 days after registration to use the Odds Boost token. T&Cs apply.
Bet £20 & Get it Back As CASH If It Loses
#AD New customers only. Place your FIRST bet on any Horse Racing market and if it loses we will refund your stake in CASH. Max refund for this offer is £20. Only deposits made using cards will qualify for this promotion. T&Cs apply.
Welcome Offer
#AD Bet £10 & Get £50 in Free Bets for new customers at bet365. Min deposit requirement. Free Bets are paid as Bet Credits and are available for use upon settlement of bets to value of qualifying deposit. Min odds, bet and payment method exclusions apply. Returns exclude Bet Credits stake. Time limits and T&Cs apply. The bonus code SPTS365 can be used during registration, but does not change the offer amount in any way.
Bet £10 Get £30 In Free Bets
#AD 18+. Play Safe. New customers using Promo code R30 only, Min £10/€10 stake,  min odds 1/2, free bets paid as 3 x £10/€10, free bets credited after settlement of first qualifying bet, free bets will expire 30 days after the qualifying bet is placed, payment method/player/country restrictions apply.
Bet £20 & Get it Back As CASH If It Loses
#AD 18+ begambleaware.org Max £20 refund on first bet. Bet must be placed in first 7 days of account opening. Only deposits made via Debit Card will be eligible for the promotion. T&Cs apply.
Bet £10 Get £60 in Bonuses
#AD New UK customers only. Register using the promo code BETFRED60, deposit and place first bet of £10+ on Sports (cumulative Evens+) within 7 days of registration. First bet must be on Sports. £20 in Free Bets to be used on Sports, £10 in Free Bets to be used on Lotto and 50 Free Spins (20p per spin) credited within 48 hours of bet settlement. Further £20 in Free Bets credited 5 days after settlement. Bonuses have a 7-day expiry. Payment restrictions apply. SMS verification and/or Proof of I.D and address may be required. Full T&Cs apply.
Bet £10 Get £30 Free Bets (APP Only)
#AD New UK, IE & Malta customers only. 18+. Min £10/€10 first deposit using Debit Card or Trustly. Place a bet of £10 at min odds of 1.5. Free bets expire in 90 days. Full T&Cs apply.
Bet £10 Get £30 Free Bets + £10 Casino Bonus
#AD Minimum deposit of £10 using deposit code 30F - A qualifying bet is a ‘real money’ stake of at least £10 placed on any sports market - Minimum odds of 1/2 (1.5) - Free bets credited upon qualifying bet settlement and expire after 7 days - Free bet stakes not included in returns - Casino Bonus must be claimed within 7 days • To withdraw bonus/related wins, wager bonus amount x40 within 14 days • Wagering req. vary by game • Withdrawal restrictions and Full T&C’s apply. 18+ begambleaware.org
Bet £10 Get £30 Free Bets
#AD Offer includes a free £1 Race Index spread bet to try out our exciting 50-25-10 race markets. Place a £10 fixed odds bet at minimum odds of 1/2. Get 2 x £10 free fixed odds bets + 2 x £5 free Winning Favourites spread bets. Bet with live streaming on all racing and greyhounds! Ts&Cs Apply. 18+ begambleaware.org
£35 Free Bet + 10 Free Spins
If your account has Sportsbook losses at the end of your first day's betting, QuinnBet will refund 50% of your losses as a Free Bet up to £35 (min 3 bets) Plus 10 Free Spins. Even if your account is up, you're guaranteed a £5 Free Bet Plus 10 Free Spins provided you place at least 1 bet of £10 or greater at the minimum odds. T&Cs apply | 18+ New UK Customers Only | BeGambleAware.org
50% Up To £50 Welcome Bonus
#AD 18+ begambleaware.org; New bettors get 50% of deposit up to £50; Once per household; Min deposit £15 (no Skrill/Neteller); Wager a total of 8 times deposit + bonus, with max qualifying bet stake equal to your initial bonus amount; Bonus expires after 60 days; Min odds of 4/5 on singles, or 2/5 per leg for acca; Some bet types excluded; See full terms.
Latest racing results
Leicester
13:15
Full Result
1stGrozni
4/1
2ndNot A Light
9/2
3rdScamallach Liath
7/2CF
Lingfield
12:50
Full Result
2ndProfitable Dawn
14/1
3rdDiamond Dreamer
4/1F
4thSassy Redhead
11/2
Leicester
12:40
Full Result
1stThe Boat
9/4F
2ndBoagrius
9/2
3rdDreamsundermyfeet
5/1
View All Today's Results