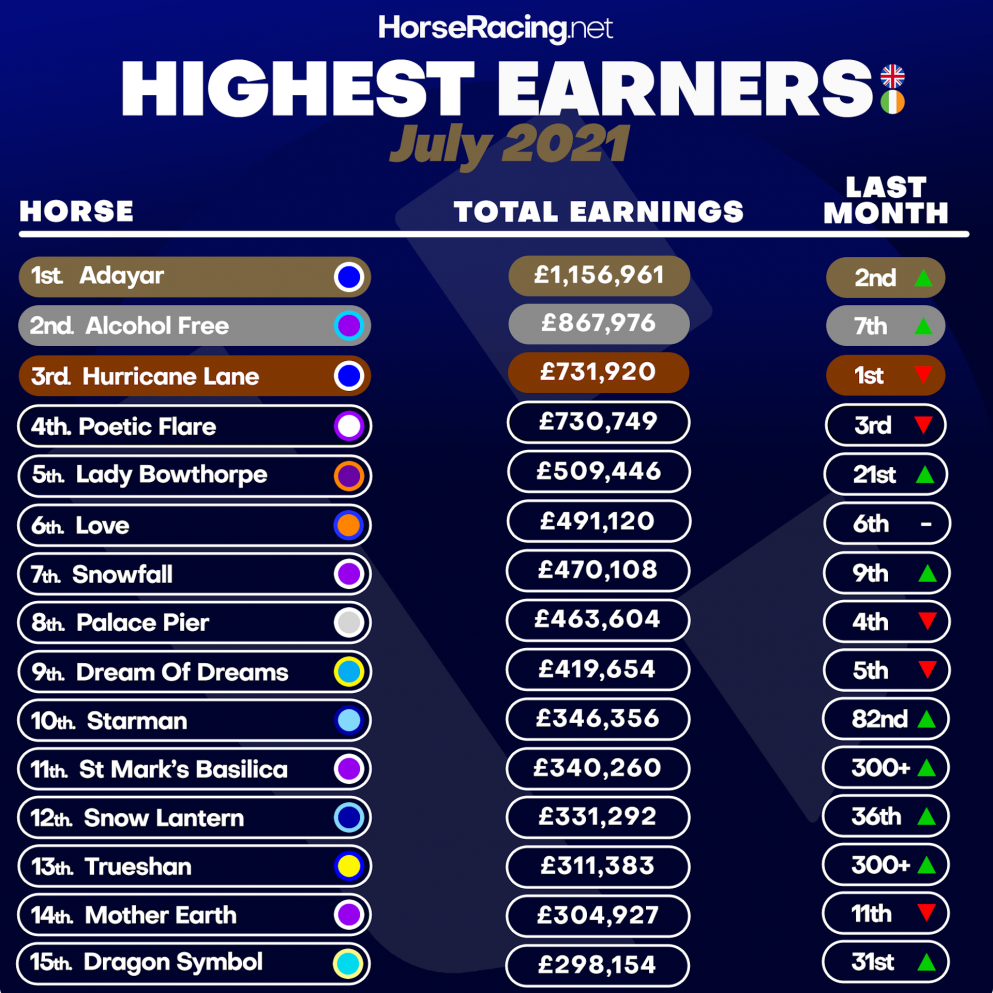 Adayar tops the charts after King George glory at Ascot.

Charlie Appleby's Adayar had already blitzed his rivals to claim Cazoo Derby glory at Epsom back in June, but the Godolphin raider enhanced his already lofty reputation further in July as he rocketed to a mightily impressive win in the King George at Ascot. This sensational Group 1 success over his elders saw him soar clear at the top of the money standings for the 2021 Flat season, and he has amassed over one million pounds already during this magnificent campaign.

Taking a look at the latest earnings table as we head into August, there's an array of top notch talent, but the top four spots are held by three-year-olds, who have blossomed in their age group, and some have ventured away from the Classic generation and downed older, more experienced rivals.

Back to our table-topper Adayar, who has won a whopping £1,156,961, Appleby's superstar son of Frankel has shown that his Derby success was no fluke as he got the better of the wonder mare Love in an enthralling renewal of the King George last month, and his win at Ascot saw him leapfrog stable Hurricane Lane, who was top of the standings at the start of July. The Irish Derby hero Hurricane Lane has not been seen since our June Money Earnings Standings article, so his figure of £731,920 has not been built on, and he was duly dropped into third spot by a real top notch filly in the shape of Alcohol Free, who was a magnificent winner of the Sussex Stakes at Glorious Goodwood last week.

Sitting in seventh position at the start of July, Coronation Stakes heroine Alcohol Free firstly notched up a profitable third place finish in the Falmouth Stakes at Newmarket, but a career best success in the Sussex Stakes saw her launch herself into the silver medal spot, and she has amassed a magnificent £867,967 in prize money.

Alcohol Free caused a minor shock in the Sussex as she got the better of 2000 Guineas winner Poetic Flare, who was the hot jolly to take the coveted Group 1 crown, but Jim Bolger's stable star was unable to land another big prize, and had to settle for second spot. However, there was still a nice payday for connections for that runner-up spot. Third in the standings last month, the Dawn Approach colt has dropped one place to fourth, but he's a meagre £1,171 behind Hurricane Lane in fourth spot with his season earnings now up to £730,749.

Completing the top five is the first of our older horses, and it's a completely new entry from last month's standings, and the horse in question is the top-class mare Lady Bowthorpe, who showed she was a real class act as she bounded to an epic win in the Nassau Stakes at Glorious Goodwood. Fourth in the Falmouth a few weeks ago, the William Jarvis-trained raider finally notched up her Group 1 prize and her Nassau win propelled her to earnings of £509,446.

There are five unbeaten horses sitting in the top 15 and leading that quintet is the magnificent dual Oaks winner Snowfall, whose eight-and-a-half length romp in the Irish Classic in mid-July saw her earnings rise to £470,018 and she is in seventh spot just behind stablemate Love. One place lower is another unbeaten performer in the shape of Palace Pier, who was expected to line up in the Sussex Stakes but missed that outing, so having not been seen in July has remained on £463,604 and has dropped from fourth place to eighth.

Dream Of Dreams (9th), Starman (10th) and St Mark's Basilica (11th) are the other trio of unbeaten horses in the top-15 of the money standings, while a couple of new names in the list are the Nassau runner-up Snow Lantern, who has become a real model of consistency at the highest level and she has won £331, 292 and is 12th spot.

The star stayer from Glorious Goodwood Trueshan benefited from the absence of Stradivarius and the Alan King-trained runner has soared into 13th spot ahead of Mother Earth and Dragon Symbol, and sits on £311,383, but with some valuable pots available over the next few weeks when we revisit the standings at the beginning of September, it could all be different in the money list for an epic Flat season.

Monster! Adayar's performance in the King George is all the #MondayMotivation you need... https://t.co/YVmuFMZzd4