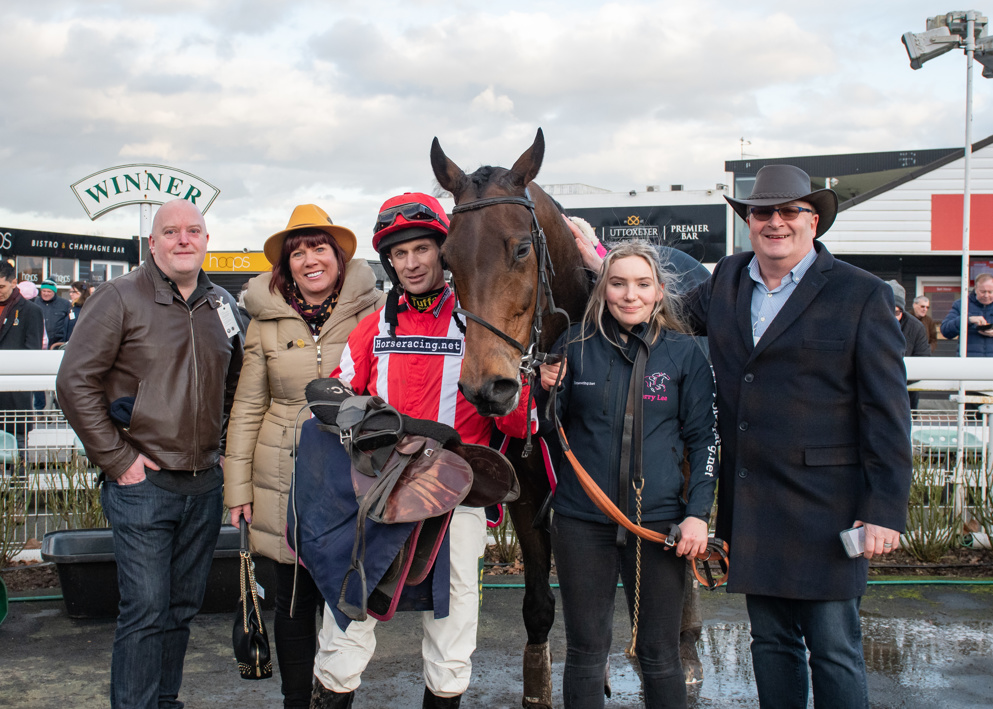 Destined To Shine enjoyed a productive first season over fences for the Kerry Lee team.

With the 2019/20 Jumps season now behind us, Nick Seddon reflects on a first season over fences for the Kerry Lee-trained Destined To Shine, who was the subject of an online documentary on our YouTube channel…

The vast majority of the limelight at The Bell House in Herefordshire has undoubtedly been on Happy Diva this season, as she enjoyed a stellar campaign which saw her win the BetVictor Gold Cup at Cheltenham last November for the Kerry Lee team - something that the trainer herself has described as the 'biggest win' of her career to date.

The nine-year-old has undoubtedly been one of the stars of the campaign, and you'll struggle to find a better spectacle all term than her narrow defeat to the Phil Kirby-trained Lady Buttons in a listed chase at Doncaster over Christmas, though one horse who has been of particular interest for the site is the eight-year-old Destined To Shine - who embarked on his first campaign over fences this term.

A rangy gelding, Destined To Shine showed plenty of ability over hurdles; winning twice from 10 starts and signing off the previous season with one of his best efforts to date to win at Haydock in March 2019, though Lee explained that the plan was always to progress him to the larger fences.

She said: "We've always been looking to go chasing with Destined To Shine long-term, as it's looked as though that would very much be his game. He’s taken to it very very well so far, and he's a very happy horse in that he wants to race and enjoys his jumping - so he’s a great chap to have around the place.

"I’ve always had quite a soft spot for Destined, as he’s been quite a hard horse to train. We named him ‘Doug the thug’ because he was quite naughty when it came to breaking him in and teaching him how to be ridden! But despite those little hiccups, I really think that this horse can do well."

Indeed, it didn’t take Destined To Shine long to adapt to the larger obstacles having schooled well at home, and after a reappearance run at Hereford on chasing debut in early November - which taught him plenty - he followed that up by placing four weeks later at Bangor.

Finding the eight-year-old’s optimum trip proved to be a key conundrum for  Lee, and he again shaped well on his third outing over fences - finishing fourth at Doncaster over two miles and three furlongs in January.  “I think two miles does seem to be his trip, particularly on softer ground,” she said, “though I would look to two and a half, particularly on an easier course with better ground, we’ll just have to see what’s about for him.”

Everything came together as planned on his fourth start, as Destined To Shine took advantage of a drop back to two miles to open his account under Danny Cook; “He’s been a lot of fun to train this season, and it was really good for that to culminate in a win with him at Uttoxeter - that was a very happy day for us all.”

The suspension of Jumps racing until July 1 at the earliest due to the Coronavirus outbreak has rather thrown a spanner into the works as far as the gelding's season was concerned, and Lee admitted that she would likely have taken advantage of the faster spring ground with her charge;

“I had hoped to keep him in training actually, to run through April having won his novice chase, and through the summer because he was quite late to win in the season," she said.

"I think the BHA are going to let horses that have won their first novice chase in 2020 stay as a novice until the end of the year, so that should be quite fun. But I think he’s probably better on better ground, so I’ll be looking at getting him out early if at all possible.

"I’m not a massive fan of summer jumping on the hard ground in July and August; I had hoped to keep some in for May and June, but that had to go by the wayside pretty quickly, and then I’ll be looking to have my quicker ground horses ready to go by September/October time fingers crossed.

"In the meantime, he is due to go to the Golden Valley in Herefordshire on Monday for some of the best grass in the country I think, so he’s going to get nice and fat on his summer holidays, and have a nice time out with a few others! We’ve got some lovely grass around Herefordshire that they can go and enjoy and actually switch off from being racehorses - which is really good for them."

Kerry was speaking to the first episode of the HorseRacing At Home Podcast, which you can listen to below.