Five Key Questions ahead of the Long Walk Hurdle 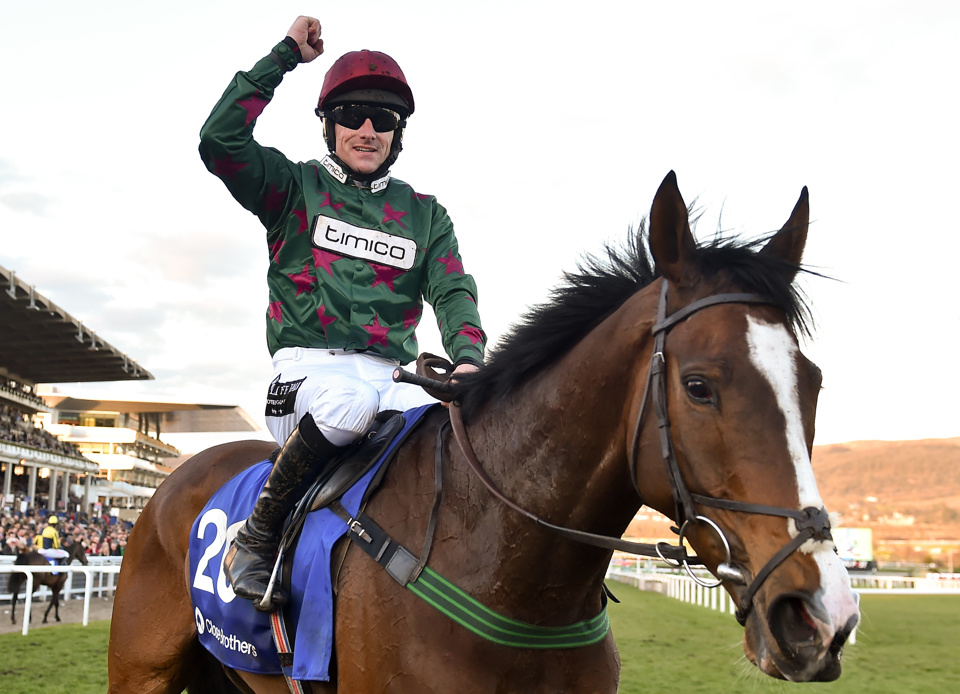 Brian Hughes has a good book of rides on Saturday afternoon.

Alex Stearn looks at five key talking points ahead of a busy Saturday of racing action, and the final race day before the festive period...

How will Paisley Park cope with heavy ground?

Since Ascot’s previous meeting, the Long Walk Hurdle had hinted at being an early Christmas treat, with Paisley Park set to take on Harry Fry’s improving hurdler, If The Cap Fits, but after he was ruled out at the confirmation stage on Monday, it looks as being nothing more than a glorified racecourse gallop for Emma Lavelle’s stable star. However, with the amount of rain forecast, the Marsh Hurdle looks like being run on marshland, which will pose a new challenge for the short-priced favourite. Andrew Gemmell’s popular hurdler took this contest last year on soft ground, but if it ends up being as heavy as it was during Champions Day, it will be a thorough test of stamina. Paisley Park has often been seen to have hit flat spots during his races, and although he didn’t at Newbury on his return, the heavy ground will test his will to win. If he only even slightly copes with the ground he should be good enough to win this contest, but the field isn’t without mud-lovers that could cause a shock. L’Ami Serge is a Group 1 winner on very soft ground in France so has the ability to be involved here despite coming off a long lay-off, whilst Agrapart is a Cleeve Hurdle winner on heavy ground, with the booking of Davy Russell catching the eye. An on-song Paisley Park should leave these in his wake but the unknown of how he will cope with the ground leaves a small nagging doubt that it might not be as straight-forward as the market suggests.

Top performer Paisley Park makes it six on the bounce and remains unbeaten in senior company for @Elavelleracing at @NewburyRacing https://t.co/m9V8DuKYMo

The lights to lead the way?

The Grade 3 handicap hurdle rounds off Ascot’s card, and by the time 15.35 comes around, it will be truly dismal ground, making it a war of attrition for the runners. If backing a hold-up horse, you will need to keep a close eye on them during the 2-mile trip, as by the time they swing into the straight, their distinctive silks are going to be unrecognisable. The race itself is wide open, with it near 7/1 the field at the time of writing, and given how soft it will be underfoot, it may pay to side with the horses at the bottom of the weights that will have the light weights on their back. Hughie Morrison doesn’t have many that go jumping over the winter, but his runner, namely Not So Sleepy, has a strong chance of following up. He won over C&D on soft ground on his latest start, the form of which was boosted when the third from that contest was only just touched off at Cheltenham last week. He does have a 5 lb higher mark to contend with here, but that rise in the weights would have been required for him to race from within the handicap, allowing him to get in this contest with a featherweight 10-03 on his back. The best of his Flat form has come with plenty of give underfoot, and with improvement still capable in this sphere, he has plenty of factors that help make his case.

Of the rest with under 11 stone on their back, Quoi De Neuf comes here off the back of a good fourth in the Greatwood when a staying on length and a half behind the reopposing Harambe, with the softer surface likely to able him to close the gap. Two intriguing handicap debutantes complete the list of alternatives – Sir Valentine and Tamaroc Du Mathan. The form of each of one of their latest starts is likely to have taken a boost on Friday afternoon, with both their previous conquerors lining up against each other at Ascot in Grade 2 company. If Ribble Valley wins, expect Sir Valentine to attract each-way support from the Twiston-Davies team after Sir Valentine chased him home at Wetherby last time, whilst a victory for Master Debonair will see Tamaroc Du Mathan have his price cut on just his second start for Paul Nicholls.

Venetia Williams usually excels when the mud starts to fly, and her string could hardly be in better form heading into a wet weekend. With an incredible 12 winners from her last 26 runners before racing on Friday, it isn’t hard to see why she has two big hopes of success on Saturday at Ascot.

Firstly, Espoir De Guye looks like starting as favourite in the handicap chase at 13.50. Admittedly, it is an extremely open contest given the small field, but he will be popular given the nature of his performance last time out. He was a comfortable winner over the same trip at Exeter on soft ground, so ticks a lot of boxes when making a case for him. He had the race at his mercy from four out, travelling better than most and allowed Charlie Deutsch to press the button between the last two fences to kick clear. He has to run off a 9 lb higher mark here as a consequence, but he was impressive on the last occasion and could be capable of defying that rise.

Just over an hour later, Yalltari drops back into handicap company at Ascot after last being seen over this course and distance in February. That saw him finish third in Grade 2 company, and the form of that run suggests that his mark of 145 could be lenient. Given that it is a listed handicap, it gives him a nice racing weight, and more progress isn’t fully out of the question either given how lightly raced this eight-year-old is. The 308-day lay-off isn’t ideal when taking on race-fit rivals under these conditions, but his handler is extremely capable of readying one, especially when her string is in such red-hot form.

Three of the best for Hughes on Saturday?

Brian Hughes has been considered the Champion Jockey of the north for the past few seasons, and whilst he’s usually struggled to keep up with the relentless pace set by Richard Johnson, he can head into the Christmas break with a lead. Whilst last year’s champion heads to Ascot, Hughes is staying put in the north with what looks to be a strong book of rides at Newcastle, with three solid chances.

He bookends the card for handler Keith Dalgleish, retaining the rides from their respective last successes. Firstly, Starplex lines up in a low-grade two-mile hurdle after winning at the track nine days ago. He has to contend with a drop back in trip and a 9 lb higher mark here, but the way that this son of Multiplex travelled throughout the contest last time suggests that neither of those factors should be an issue in preventing a bold bid to follow up and can get him off to the perfect start.

Nicky Richards has his string in good form at the minute, and he sends Glittering Love for his seasonal reappearance in the search for a five-timer. Hughes struck up quite a partnership with this horse last year, when on board for all four of his victories over fences. The last three of those wins came at three miles on soft ground, but being that they were round the sharp-natured Ayr, the drop back to two and a half miles round Newcastle shouldn’t be an issue.

The second start for Dalgleish sees Hughes finish the card in the bumper, with a plum ride on the Paul and Clare Rooney-owned Let Me Be. He was slightly green at Aintree on his first start under Rules, but once he had learnt what was needed during the race, he won by 5 lengths. His performance suggested that he could be a horse to follow for the season in the bumper sphere, with this contest looking an excellent stepping stone to a higher level considering that it lacks in quality and can be used as another learning experience. A Hughes hat-trick can sign punters off for the Christmas period with their pockets filled ready for the festive feast that kicks off on Boxing Day.

Will Lingfield be needed to save the day?

With the overhanging threat of rain on already heavy ground, the Jumps meetings may succumb to the weather, paving the way for the all-weather to save us all from early Christmas small-talk with our distant relatives. The Quebec Stakes headlines their card, and despite the relatively small field, it is a contest filled with quality. John Gosden is double-handed in his bid to follow up last year’s success, with the progressive Dubai Warrior his main hope. Robert Havlin would have had the choice between him and Court House, and having selected the former, he will be hoping to maintain his unbeaten partnership with this colt. His successes in novice company earlier in the year got us all purring at the quality of this animal, but the bubble was somewhat burst when he was beaten on handicap debut and then on his only start on grass to date in Group 3 company.

He’s since regained the winning thread when beating two of today’s rivals at Chelmsford over a month ago, and given that he now meets them on better terms than he did in handicap company, it’s hard to see Victory Bond and Kasbaan turning the tables. Those two have more recent form together, when finishing first and third respectively in a C&D handicap just 17 days ago, and would be expected to finish in that order again. As mentioned, stablemate Court House also lines up, but he may have to settle for the role of pacemaker again. Dalgarno completes the field of five, but given he has to cope with a penalty when success at listed level in France on his latest start, he has plenty to find at the weights with Dubai Warrior.

DUBAI WARRIOR accounted for both Kasbaan (second) and Victory Bond (third) at Chelmsford last month and is fancied to frank that form for John Gosden. Polytrack is clearly his preferred surface and he can take this before moving towards bigger targets on the all-weather next year. Victory Bond had Kasbaan a length back in third when scoring over this C&D 17 days ago but isn't sure to confirm superiority, while recent French Listed hero Dalgarno can prove best of the remainder.