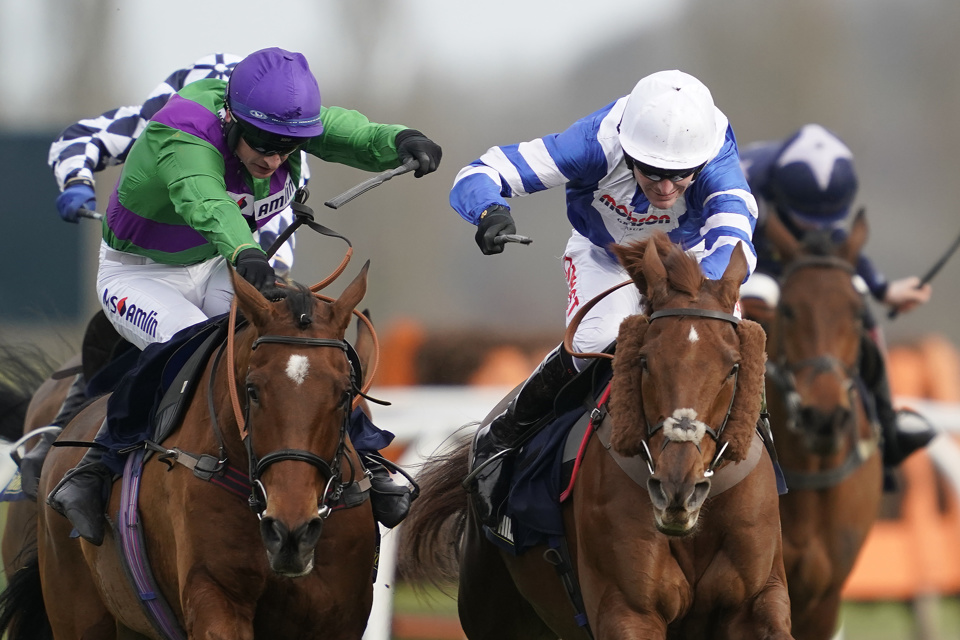 San Benedeto claimed victory in this Newbury race in 2019.

Steve Chambers takes an in-depth look at Saturday's Greatwood Gold Cup at Newbury, where the Paul Nicholls-trained San Benedeto looks to retain the crown he won impressively 12 months ago...

Saddling his ninth winner in the race since its inception in 2004, champion trainer Nicholls has been the man to follow in what, on paper, looks a competitive betting heat year-on-year, but the Ditcheat handler always seems to unearth a notable horse to grab the prize.

Saturday's 2020 running will unsurprisingly see Nicholls unleash another strong battalion and he has three entries for the 2m 3f 187y contest, and the aforementioned reigning champion San Benedeto will attempt to become the first horse in history to win back-to-back renewals. A two-and-a-quarter length winner last year off a mark 147, San Benedeto is only rated 150 for this year's race, so if he can produce his best form then he could be the one to beat.

Last seen finishing fourth in a competitive handicap chase at Newbury in November, the nine-year-old has been given a decent break by Nicholls and having been dropped 2 lb by the handicapper for that, has been given an obvious chance. Prior to last year's renewal he had finished last of ten at Ascot, so Nicholls knows how to get them to bounce back from a mediocre showing, so it's hard to write off the reigning champion and he has to come into calculations.

The second shot fired by the Nicholls gun is the classy Secret Investor, who will have the burden of top weight in Saturday's race, but having last been seen chasing home former Cheltenham Gold Cup winner Native River in the Denman Chase, then he has to be considered. Given a 4 lb rise for that fine run in Grade 2 company, Secret Investor is also well fancied for the Ultima Handicap Chase at next month's Cheltenham Festival, but if Nicholls opts to let him loose on Saturday then his class will see him go close to toppling his stablemate, San Benedeto.

Mont Des Avaloirs will complete the Nicholls triumvirate and is the one that is yet to produce the goods over fences. Well beaten by Sussex Ranger in a novices' handicap chase at Newbury earlier this month, the seven-year-old will need to improve immeasurably to play a primary role here, but with Nicholls often getting his string firing on all cylinders in this race, then it could be wise to watch the market regarding this contender.

A 9th win in this race for @PFNicholls!

Philip Hobbs bagged victory in the Greatwood Gold Cup back in 2005 with Supreme Prince and he will fire a dual-pronged attack at Saturday's renewal, with Jerrysback spearheading his pair of challengers. Having not tasted victory since his chasing debut in December 2018, Jerrysback has been handed some tough assignments by his trainer. Third in the National Hunt Chase at last year's Cheltenham Festival, the JP McManus-owned gelding was last seen finishing third in a competitive event at Ascot. Running off the same mark of 143 this weekend, the eight-year-old will be hoping that a drop back in trip can see him blossom over fences once again.

Tidal Flow is Hobbs' other runner. For a seven-year-old, he's very lightly raced having only jumped the larger obstacles on three occasions, and he was last seen finishing second at Newbury in December. However, he has been upped 2 lb for that Newbury run, so he has been handed a stiffer task this weekend, and up against better quality rivals he may struggle.

Domaine De L'Isle beat Bennys King when the pair clashed at Ascot in January and they are set to renew their rivalries on Saturday in this event. The former has since tasted defeat at Ascot off a 6 lb higher mark, so he may well be in the handicapper's grip now. That may provide could Bennys King an opportunity to reverse their January form, and while Bennys King was upped 4 lb for that Ascot run, he could still be open to some more improvement and is the pick of this pair.

Tom George's Clondaw Castle was an impressive four-and-a-quarter length winner of a Warwick event earlier this month, so he will be aiming to follow that success up. Given a 6 lb rise for that success, he will need to continue on his upward curve but having contested Grade 1 novice chases last season, connections must feel like he can potentially figure here.

Of the others, Cloudy Glen and Enrichissant will hope to sneak in at the bottom of the handicap with the former aiming to bounce back from a fall last time out for Venetia Williams, while David Bridgwater's Enrichissant was last seen winning at Huntingdon and while this is a huge step up in quality, he is a horse going the right way.

Bags Groove hasn't been seen on the track for over 300 days, so will make his hotly-anticipated return to the track, but while has some classy form on his CV he could improve for this outing, while Alan King's Dingo Dollar is another eye-catching entry, and will drop significantly in trip having finished fifth in the Sky Bet Chase at Doncaster.

A hugely competitive renewal, but yet again it could Nicholls that reigns supreme once again and it's San Benedeto that makes the most appeal of the Ditcheat trio, and he looks a good bet to retain his crown in magnificent style at the weekend.