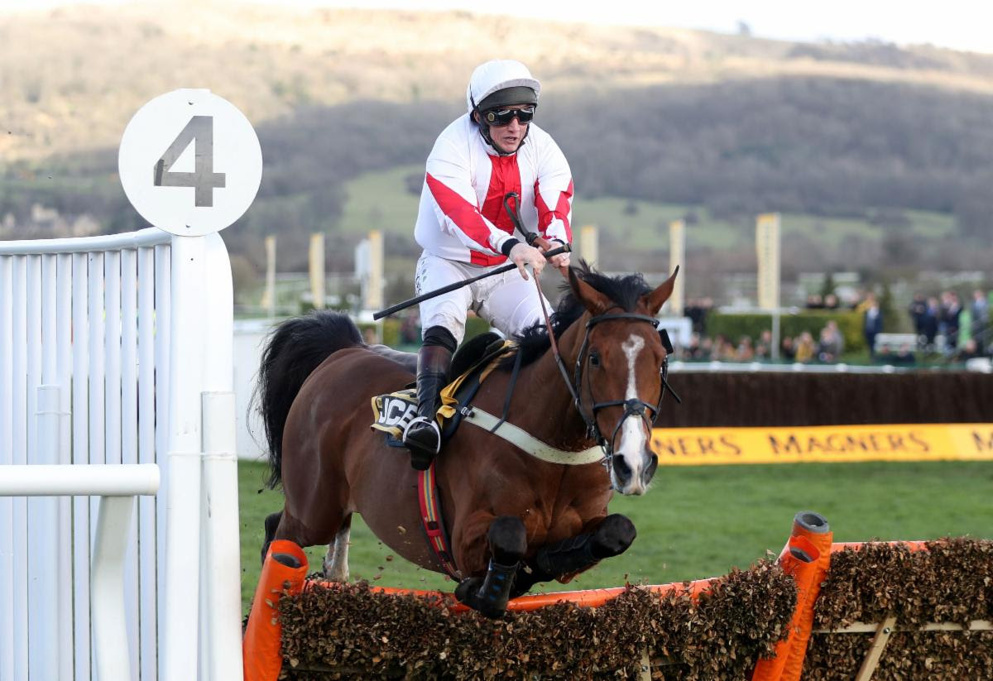 International Hurdle Tips: Goshen can outclass his rivals on Saturday at Cheltenham.

Steve Chambers previews Saturday's International Hurdle at Cheltenham, as Goshen looks to propel himself into the Champion Hurdle picture, but he will face some lively opposition...

It's the moment of truth for the Gary Moore-trained Goshen, who will return to Cheltenham on Saturday to contest the International Hurdle, as he looks to launch himself into the Champion Hurdle picture with an authoritative victory over a competitive-looking field in the Grade 2 feature. The classy four-year-old will be facing his demons at the venue that brought Cheltenham Festival heartache in March, as when miles clear in the Triumph Hurdle he suffered a last hurdle tumble, which saw his dreams of claiming juvenile glory propel into the Prestbury Park turf.

Now, having opted to bypass the recent Elite Hurdle and Coral Hurdle, the Moore team are ready to unleash their exciting, young talent at the International Hurdle, which is one of the premier trials for the Champion Hurdle. The legendary Rooster Booster was the last horse to achieve the International/Champion Hurdle back in the 2002/03 campaign, and Goshen will be bidding to emulate that feat over the coming months. Currently a 10/1 chance for the 2021 Champion Hurdle, Goshen has a long way to go over timber to become a potential threat to reigning Champion Hurdle heroine Epatante, but a victory at the weekend will certainly boost his reputation and he could become a primary challenger to the Nicky Henderson-trained mare.

Anyway, there's a small matter of a decent field to get the better of at the weekend, and Goshen will line up as the race favourite as he looks to venture into the all-age category and make an immediate stamp on the division. In receipt of 6 lb from his older adversaries, Goshen will need to improve on two recent outings on the Flat, where he failed to fire, but a return to the jumping game should see him blossom, and having shown a real liking for the undulations of Prestbury Park then it's all set up for a dominant victory.

Jamie Moore is likely to adopt similar tactics to the Triumph by stalking the leaders, but Moore could well look to hold on to his charge a little longer than in the Triumph. Goshen's engine looks sensational, and providing Moore can hold on to his mount until they enter the straight, then the youngster can propel clear of his rivals in fine fashion and show that he could be a real Champion Hurdle contender.

However, it's Burning Victory who sweeps home to pick up the pieces and land the JCB Triumph Hurdle 🏆

Nicky Henderson has won the last three renewals of the International and the Seven Barrows handler will saddle a dual-pronged attack with last year's winner Call Me Lord and former Grade 1-winning hurdler Verdana Blue lining up. Call Me Lord hasn't tasted victory since this race last season and was beaten by Song For Someone in the Coral Ascot Hurdle last month, and the pair will lock horns again on Saturday. Fresh from a victory in the Kingwell Hurdle at Wincanton, Song For Someone then landed that Ascot prize in impressive fashion, and he should be able to frank that form over Call Me Lord, who often blows more cold than hot on the big stage. Song For Someone will be making his first trip to Cheltenham,, so will be looking to show that he can produce the goods at the Gloucestershire venue, and if he can perform then the current 33/1 for the Champion Hurdle won't be around too long, but he may just struggle to live with the pace of Goshen, who may just have a little too much speed for his rival, who may excel over a little further.

Like Call Me Lord, Verdana Blue is another Henderson horse that has failed to fire on all cylinders in recent times and she has been beaten in two listed events recently, so is entitled to be installed at double-figured odds. Two that could prove to be a thorn in the side of Goshen are former County Hurdle winner Ch'tibello and Alan King's Sceau Royal, who has been in fine form this season after a switch back to the hurdling sphere from the chasing division.

Ch'tibello has failed to get his head in front since the 2019 County Hurdle, but Dan Skelton's charge has been a real model of consistency and was last seen finishing second to Summerville Boy at Aintree. That pair will lock horns once again and Summerville Boy will return to the track where he claimed Supreme Novices' Hurdle glory at the 2018 Cheltenham Festival, but he has failed to kick on from that Grade 1 success. A winner of the Relkeel Hurdle back in January, Summerville Boy failed to build on that aforementioned Aintree success when fourth in the Long Distance Hurdle, but while he will relish a drop back in trip here, it's likely that he would be best seen over 2m 4f, so that will leave the door open to Ch'tibello, who has often been at his best over shorter trips, and Skelton's charge can win that mini duel.

Sceau Royal has been one of the form hurdlers this season as having won the Welsh Champion Hurdle, the Barbury Castle inmate then eased to a seven and a half length win in the Elite Hurdle at Wincanton. However, his sparkling winning run came to an end in the Grade 1 Fighting Fifth Hurdle at Newcastle, where he was thrashed by Champion Hurdle heroine Epatante, who cruised clear of King's charge. While Goshen is not at Epatante's level yet, he could prove to be a real top notch Grade 1 performer, and Sceau Royal has often struggled to get his head in front against those classy performers, and having tasted defeat on his last two visits to Cheltenham Sceau Royal can be another ignored.

Silver Streak, Ballyandy and Stormy Ireland complete the line-up, and the former will hope for a little more luck than he had in the Fighting Fifth Hurdle, where he was carried out in the early stages of the race. Runner-up in the 2018 International Hurdle, Silver Streak is another that has often found a couple two good at Cheltenham, and while he won two starts ago at listed level, the grey will find this a little tough.

Ballyandy chased home Call Me Lord in this race 12 months ago and the Nigel Twiston-Davies-trained raider was a gallant runner-up in the Greatwood Hurdle at Cheltenham last month. While he will run a decent race, Ballyandy hasn't won at Cheltenham since his win in the 2016 Champion Bumper, and that record isn't likely to improve on Saturday, while Stormy Ireland returns to hurdles after being seen over fences last time out, and Paul Nicholls would need to get huge improvement out of her to star here in a race that can go the way of Goshen, who can outclass his rivals.