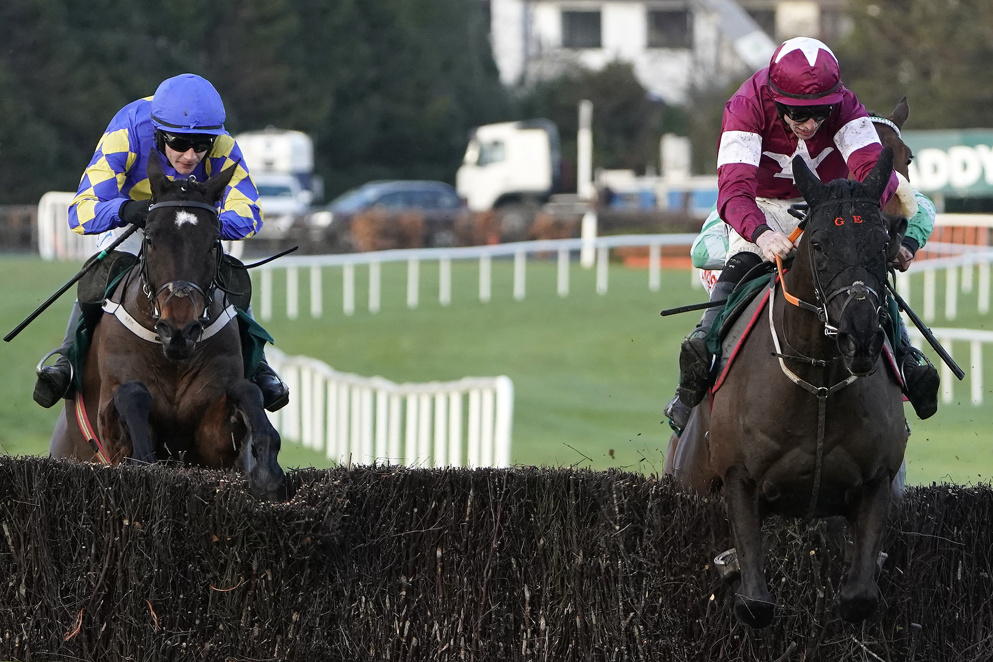 A hugely exciting field will assemble for the 2022 Irish Gold Cup, which takes centre stage on day one of the Dublin Racing Festival at Leopardstown, and we take a look at the runners here and preview the Grade 1 showpiece...

Henry De Bromhead will go in search of his first Irish Gold Cup crown on Saturday and he will saddle the reigning Cheltenham Gold Cup hero Minella Indo, who is looking to recapture his best form having failed to fire during this current campaign. A sensational winner at the Cheltenham Festival last season, Minella Indo started off his season with a mediocre third-placed finish in the Ladbrokes Champion Chase at Down Royal, finishing behind Frodon and Galvin.

Looking to bounce back from that effort, De Bromhead sent him to Kempton on Boxing Day for the King George VI Chase, but he flopped once again and was duly pulled up three fences from home. Eased in the Cheltenham Gold Cup market in the aftermath of his Christmas flop, Minella Indo is on the comeback mission, but having only finished fourth in this contest 12 months ago, it's hard to fancy him at relatively short odds. There's no doubting he relishes the test of stamina Cheltenham has to offer, so while he can't be written off next month at the festival, this Irish Gold Cup test could be beyond him.

Jostling for position at the head of the market alongside Minella Indo is last year's winner Kemboy and the former Ryanair Chase winner Frodon showed he can perform to a high level in Ireland when winning the Ladbrokes Champion Chase earlier in the campaign. Kemboy has often put his best foot forward at Leopardstown and he was superb two-length winner of this race 12 months ago, and while he is most certainly not a contender for Cheltenham Gold Cup glory, this Irish Gold Cup is well within his capabilities. A solid third behind Galvin in the Savills Chase at the track in December, Kemboy is definitely the spearhead of the Willie Mullins team here.

Paul Nicholls trained Neptune Collonges to victory in this contest back in 2009, and the Ditcheat handler will send over Frodon, who was a well beaten fourth in the King George at Christmas time, but showed when winning at Down Royal that he still is a class act in top notch staying chases. Sure to be prominent under Bryony Frost from the get-go, Frodon will be attempting to produce a fine lead-all-the-way victory, but he could just prove vulnerable in the closing stages, and he may just get picked up in the closing stages by a better stayer.

Asterion Forlonge will be the second shot fired by the Mullins gun and the classy grey has shaped with real promise in both the John Durkan at Punchestown and the King George before suffering late tumbles. He may have had to settle for second spot behind Tornado Flyer in the King George, but he has shown he has real class about him, but with his jumping frailties often costing him then it's hard to get too enthused about his chances at the price.

While most of the fancied contenders in the betting have a few clouds hanging over some of their performances this term, one runner that does line up in terrific form is the Gordon Elliott-trained CONFLATED, who has gone from strength to strength this season. An early faller when sent off for the Kerry National on his comeback run, he then chased home Eklat De Rire at Wexford in heavy going. However, he broke his duck for the season when bounding to a facile five-length win in a handicap chase at Navan. This is undoubtedly a huge step up, but he is one of the only contenders lining up in the form of his life and at huge double-figured odds he could be the value play in the race.

Of the others, Elliott's other contender is the 2020 champion Delta Work, who has struggled since being victorious two years ago, while Janidil and Cilaos Emery will complete the four-strong attack for the Mullins yard and both will find it tough at this level.

won
18/1
Cheltenham Tips
Epsom Derby Quiz: Can you name all the Derby winners since 2000?
By Steve Chambers