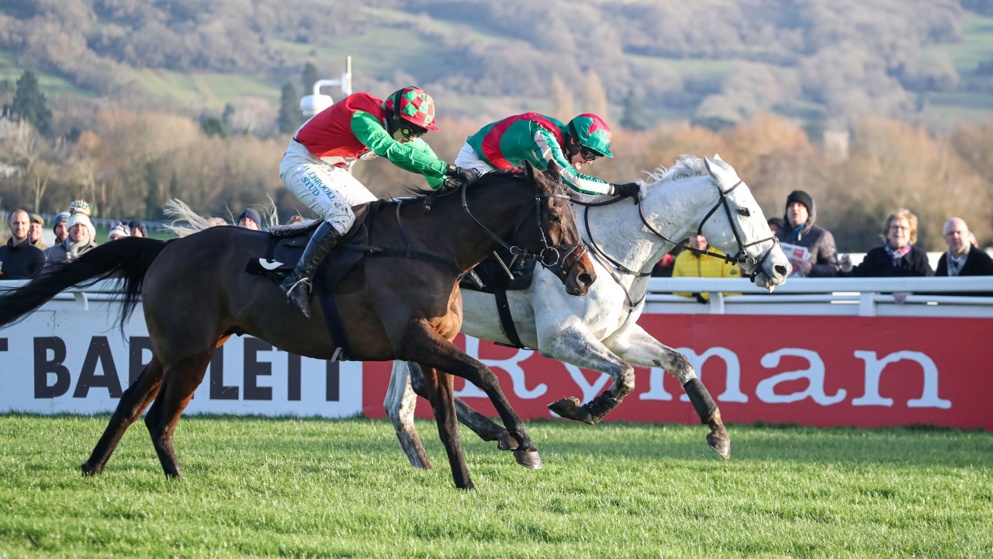 Raceolly has four tips for Cheltenham in front of the ITV racing cameras.

Fresh from tipping a 10/1 winner on Boxing Day, Raceolly is back for this week's edition of The Weekend Wager, and he focuses his attentions on Cheltenham's New Year's Day, where he has four selections to go to war with..

Big Nasty took a while to get a win on the board despite running some nice races. He finally got that win at Southwell this year and easily beat one that won three and finished 2nd twice on his next five starts. The third also won twice and finished 2nd twice after and even the horse that finished last has placed on all four runs since. Martin Keighley's charge has had a couple of good seconds since with the Lingfield effort worth marking up after being both badly hampered and losing a shoe and still finishing five lengths clear of one that won next time out. He went off a well fancied favourite on his last start in a good race at Warwick, but was well beaten and if you write that off it’s worth a play at a huge price here.

Funambule Sivola won four times last season and ended the season finishing 2nd to Shishkin in a Grade 1 at Aintree. He kicked off this season after a 239-day break finishing behind First Flow in the Grade 2 Peterborough Chase at Huntingdon. He pressured Allmankind on the lead throughout that day and made him crumble and finish 31 lengths behind despite being sent off 5/4 favourite. Grade 1 winning chaser First Flow eventually wore him down after looking in trouble three out, but it was a mighty performance and running off 155 in a handicap after that is hard to ignore. He smashed horses rated 150, 144 and 146 off level weights at Aintree and ran 164-rated Allmankind in to the ground on return makes him look very well handicapped despite top weight. Venetia Williams is still in unbelievable form with seven wins from 29 runners over the last two weeks (29% win rate).

Spiritofthegames has an awesome record here at Cheltenham in some ultra-competitive handicaps and didn’t get a good ride last time out here when finishing 9th in the Paddy Power. Harry Skelton returns to the saddle tomorrow and his hurdle mark is very tempting being a few pounds below his chase mark. He has had three hurdle runs in the last three years, but they’ve all come in the last six runs and all been very respectable and off higher marks, the last off 139 at Newbury when going down by five lengths behind one that finished 4th in a Grade 3 handicap next time out and reopposes here off 7lb worse terms with ours.

Mr Sundancer could go well here at a big price, but Iliade Allen appeals more for a stable who do very well in bumpers. Nick Williams has had 30 bumper runners over the last five years bringing in six winners and 9 places, a 20% win rate and a near 50% place rate. Iliade Allen is half sister to the yard's course Grade 2 winning hurdler Galahad Quest and the form of recent Warwick bumper win was boosted by the well beaten 5th finishing a good second behind likely favourite for this Poetic Music last time. He won well that day after running green on the run in and well worth a go at this level.

#AD New UK customers (Excluding NI) mobile only. £30 in FREE Bets (FB) as £20 in sports bets & a £10 casino bonus (CB). Min stake £10. Min odds Evs. FB applied on 1st settlement of any qualifying bet. FB 7 day expiry. 1 FB offer per customer, household & IP address only. Payment restrictions. 14 days to accept £10 CB, then active for 3 days. CB 5x wagering & max redeemable £100. Game restrictions apply. Cashed out/Free Bets won’t apply. 30 days to qualify. 18+. T&Cs apply
get offer
Bet £10 get £30 in Free Bets
#AD New customers on mobile only. 7 days to claim and stake £10 minimum bet at odds of 1.5 or greater to qualify. Free, void, cashed out or partially cashed out bets do not qualify. Max 3x £10 free bets credited on bet settlement. Free bets must be used on 4 or more selections with selection odds of 1.3 or greater. Free bets are non-withdrawable, and stake not returned with winnings. 7 day expiry. 18+BeGambleAware.org. T&Cs apply.
Double the odds, any sport, any bet, any odds!
#AD 18+ begambleaware.org Only valid for new registrations to Grosvenor Existing members do not qualify, Bet must be placed using real money in combination with the Odds Boost Token, Offer applies to Sport bets only. Max stake is £10. Each way bets are a maximum of £5 each way (£10 total). Customers have 60 days after registration to use the Odds Boost token. T&Cs apply.
Bet £20 & Get it Back As CASH If It Loses
#AD New customers only. Place your FIRST bet on any Horse Racing market and if it loses we will refund your stake in CASH. Max refund for this offer is £20. Only deposits made using cards will qualify for this promotion. T&Cs apply.
Welcome Offer
#AD Bet £10 & Get £50 in Free Bets for new customers at bet365. Min deposit requirement. Free Bets are paid as Bet Credits and are available for use upon settlement of bets to value of qualifying deposit. Min odds, bet and payment method exclusions apply. Returns exclude Bet Credits stake. Time limits and T&Cs apply. The bonus code SPTS365 can be used during registration, but does not change the offer amount in any way.
Bet £10 Get £30 In Free Bets
#AD 18+. Play Safe. New customers using Promo code R30 only, Min £10/€10 stake,  min odds 1/2, free bets paid as 3 x £10/€10, free bets credited after settlement of first qualifying bet, free bets will expire 30 days after the qualifying bet is placed, payment method/player/country restrictions apply.
Bet £20 & Get it Back As CASH If It Loses
#AD 18+ begambleaware.org Max £20 refund on first bet. Bet must be placed in first 7 days of account opening. Only deposits made via Debit Card will be eligible for the promotion. T&Cs apply.
Bet £10 Get £60 in Bonuses
#AD New UK customers only. Register using the promo code BETFRED60, deposit and place first bet of £10+ on Sports (cumulative Evens+) within 7 days of registration. First bet must be on Sports. £20 in Free Bets to be used on Sports, £10 in Free Bets to be used on Lotto and 50 Free Spins (20p per spin) credited within 48 hours of bet settlement. Further £20 in Free Bets credited 5 days after settlement. Bonuses have a 7-day expiry. Payment restrictions apply. SMS verification and/or Proof of I.D and address may be required. Full T&Cs apply.
Bet £10 Get £30 Free Bets (APP Only)
#AD New UK, IE & Malta customers only. 18+. Min £10/€10 first deposit using Debit Card or Trustly. Place a bet of £10 at min odds of 1.5. Free bets expire in 90 days. Full T&Cs apply.
Bet £10 Get £30 Free Bets + £10 Casino Bonus
#AD Minimum deposit of £10 using deposit code 30F - A qualifying bet is a ‘real money’ stake of at least £10 placed on any sports market - Minimum odds of 1/2 (1.5) - Free bets credited upon qualifying bet settlement and expire after 7 days - Free bet stakes not included in returns - Casino Bonus must be claimed within 7 days • To withdraw bonus/related wins, wager bonus amount x40 within 14 days • Wagering req. vary by game • Withdrawal restrictions and Full T&C’s apply. 18+ begambleaware.org
Bet £10 Get £30 Free Bets
#AD Offer includes a free £1 Race Index spread bet to try out our exciting 50-25-10 race markets. Place a £10 fixed odds bet at minimum odds of 1/2. Get 2 x £10 free fixed odds bets + 2 x £5 free Winning Favourites spread bets. Bet with live streaming on all racing and greyhounds! Ts&Cs Apply. 18+ begambleaware.org
£35 Free Bet + 10 Free Spins
If your account has Sportsbook losses at the end of your first day's betting, QuinnBet will refund 50% of your losses as a Free Bet up to £35 (min 3 bets) Plus 10 Free Spins. Even if your account is up, you're guaranteed a £5 Free Bet Plus 10 Free Spins provided you place at least 1 bet of £10 or greater at the minimum odds. T&Cs apply | 18+ New UK Customers Only | BeGambleAware.org
50% Up To £50 Welcome Bonus
#AD 18+ begambleaware.org; New bettors get 50% of deposit up to £50; Once per household; Min deposit £15 (no Skrill/Neteller); Wager a total of 8 times deposit + bonus, with max qualifying bet stake equal to your initial bonus amount; Bonus expires after 60 days; Min odds of 4/5 on singles, or 2/5 per leg for acca; Some bet types excluded; See full terms.
Latest racing results
Lingfield
11:50
Full Result
1stStarshiba
7/1
2ndGranary Queen
5/2F
3rdBroxi
15/2
Lingfield
11:20
Full Result
1stBlue Collar Lad
12/1
2ndRuith Le Tu
9/1
3rdMcQueen
100/30
Southwell
20:20
Full Result
1stSweet Fantasy
15/8F
2ndInfinitive
2/1
3rdBugle Major
13/2
View All Today's Results