The Weekend Wager: Raceolly's tips for Cheltenham on Saturday 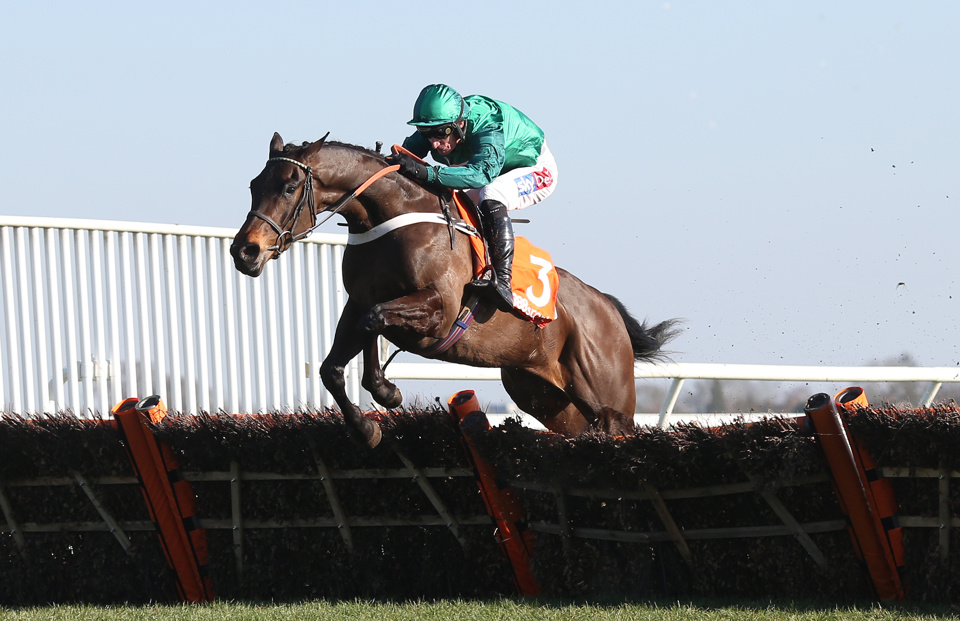 In this week's edition of The Weekend Wager, Raceolly focuses on Cheltenham's action-packed Saturday card, which is live in front of the ITV racing cards, and he has four tips for the action here...

TITIAN is a recent 155,000gns purchase after winning at Doncaster for William Haggas. He’s an 88 rated Flat horse brought to David Pipe with the Triumph Hurdle in mind and starts off in the race that Pipe won last year with eventual triumph runner up Adagio.

FRERO BANBOU is getting better with each run this season having been heavily backed on seasonal debut when running a strange race, dropping out early but running on in to fourth at the end. He ran well last time behind Il Ridoto at Newbury, who then went on to go off just 6/1 for a Grade 1 on his next start, but has form with the favourite here at the end of last season at Aintree which makes him very interesting. Beaten eight lengths that day behind Editeur Du Gite, but now has an 18lbs turn around in the handicap and finds himself twice the price. It’s Venetia Williams' time of the season and she’s sent out six winners from 23 runners over the last two weeks (26% win rate) and has sent out 47 horses in handicap chases this season for which 11 have won (23% win).

This is such a good race when you dig in to it and there’s plenty to like about a few of the huge prices in particular Topofthecotswolds, who took my eye at a massive 40/1, but I can’t get away from FUSIL RAFFLES on his handicap debut. He won the Charlie Hall on his last start and although fortunate after the Shan Blue fall he did beat the rest well and is a young and improving chaser with more to come. He's won at the track twice and finished a good second in the Marsh Novices' Chase behind Chantry House at the Cheltenham Festival, a horse who he’s beaten here before also over course and distance. Daryl Jacob has an excellent strike rate when riding for Nicky Henderson with a 25% win rate after 170 rides over the last five seasons.

MARTELLO SKY won over course and distance to end last season winning nicely then won easily on seasonal debut at Market Rasen taking her hurdle record to four wins from five runs before going to Aintree for a very hot race, where all but one had won at at least Grade 2 level with the other a Listed winner. She went off favourite for that race and ran very well in fourth finishing upside Stayers' Hurdle winner Lisnagar Oscar and previous Aintree hurdle winner If The Cap Fits. That was a huge run and market expectations indicated that she would have gone close, and she's now dropped back in to a handicap for this tomorrow off 140, and is very appealing especially when you dig through the recent form (Earlofthecotswolds 3rd behind at Market Rasen won next two and now rated 139 and finishing upsides 155 rated horses last time out)

#AD New UK customers (Excluding NI) mobile only. £30 in FREE Bets (FB) as £20 in sports bets & a £10 casino bonus (CB). Min stake £10. Min odds Evs. FB applied on 1st settlement of any qualifying bet. FB 7 day expiry. 1 FB offer per customer, household & IP address only. Payment restrictions. 14 days to accept £10 CB, then active for 3 days. CB 5x wagering & max redeemable £100. Game restrictions apply. Cashed out/Free Bets won’t apply. 30 days to qualify. 18+. T&Cs apply
get offer
Bet £10 get £30 in Free Bets
#AD New customers on mobile only. 7 days to claim and stake £10 minimum bet at odds of 1.5 or greater to qualify. Free, void, cashed out or partially cashed out bets do not qualify. Max 3x £10 free bets credited on bet settlement. Free bets must be used on 4 or more selections with selection odds of 1.3 or greater. Free bets are non-withdrawable, and stake not returned with winnings. 7 day expiry. 18+BeGambleAware.org. T&Cs apply.
Double the odds, any sport, any bet, any odds!
#AD 18+ begambleaware.org Only valid for new registrations to Grosvenor Existing members do not qualify, Bet must be placed using real money in combination with the Odds Boost Token, Offer applies to Sport bets only. Max stake is £10. Each way bets are a maximum of £5 each way (£10 total). Customers have 60 days after registration to use the Odds Boost token. T&Cs apply.
Bet £20 & Get it Back As CASH If It Loses
#AD New customers only. Place your FIRST bet on any Horse Racing market and if it loses we will refund your stake in CASH. Max refund for this offer is £20. Only deposits made using cards will qualify for this promotion. T&Cs apply.
Welcome Offer
#AD Bet £10 & Get £50 in Free Bets for new customers at bet365. Min deposit requirement. Free Bets are paid as Bet Credits and are available for use upon settlement of bets to value of qualifying deposit. Min odds, bet and payment method exclusions apply. Returns exclude Bet Credits stake. Time limits and T&Cs apply. The bonus code SPTS365 can be used during registration, but does not change the offer amount in any way.
Bet £10 Get £30 In Free Bets
#AD 18+. Play Safe. New customers using Promo code R30 only, Min £10/€10 stake,  min odds 1/2, free bets paid as 3 x £10/€10, free bets credited after settlement of first qualifying bet, free bets will expire 30 days after the qualifying bet is placed, payment method/player/country restrictions apply.
Bet £20 & Get it Back As CASH If It Loses
#AD 18+ begambleaware.org Max £20 refund on first bet. Bet must be placed in first 7 days of account opening. Only deposits made via Debit Card will be eligible for the promotion. T&Cs apply.
Bet £10 Get £60 in Bonuses
#AD New UK customers only. Register using the promo code BETFRED60, deposit and place first bet of £10+ on Sports (cumulative Evens+) within 7 days of registration. First bet must be on Sports. £20 in Free Bets to be used on Sports, £10 in Free Bets to be used on Lotto and 50 Free Spins (20p per spin) credited within 48 hours of bet settlement. Further £20 in Free Bets credited 5 days after settlement. Bonuses have a 7-day expiry. Payment restrictions apply. SMS verification and/or Proof of I.D and address may be required. Full T&Cs apply.
Bet £10 Get £30 Free Bets (APP Only)
#AD New UK, IE & Malta customers only. 18+. Min £10/€10 first deposit using Debit Card or Trustly. Place a bet of £10 at min odds of 1.5. Free bets expire in 90 days. Full T&Cs apply.
Bet £10 Get £30 Free Bets + £10 Casino Bonus
#AD Minimum deposit of £10 using deposit code 30F - A qualifying bet is a ‘real money’ stake of at least £10 placed on any sports market - Minimum odds of 1/2 (1.5) - Free bets credited upon qualifying bet settlement and expire after 7 days - Free bet stakes not included in returns - Casino Bonus must be claimed within 7 days • To withdraw bonus/related wins, wager bonus amount x40 within 14 days • Wagering req. vary by game • Withdrawal restrictions and Full T&C’s apply. 18+ begambleaware.org
Bet £10 Get £30 Free Bets
#AD Offer includes a free £1 Race Index spread bet to try out our exciting 50-25-10 race markets. Place a £10 fixed odds bet at minimum odds of 1/2. Get 2 x £10 free fixed odds bets + 2 x £5 free Winning Favourites spread bets. Bet with live streaming on all racing and greyhounds! Ts&Cs Apply. 18+ begambleaware.org
£35 Free Bet + 10 Free Spins
If your account has Sportsbook losses at the end of your first day's betting, QuinnBet will refund 50% of your losses as a Free Bet up to £35 (min 3 bets) Plus 10 Free Spins. Even if your account is up, you're guaranteed a £5 Free Bet Plus 10 Free Spins provided you place at least 1 bet of £10 or greater at the minimum odds. T&Cs apply | 18+ New UK Customers Only | BeGambleAware.org
50% Up To £50 Welcome Bonus
#AD 18+ begambleaware.org; New bettors get 50% of deposit up to £50; Once per household; Min deposit £15 (no Skrill/Neteller); Wager a total of 8 times deposit + bonus, with max qualifying bet stake equal to your initial bonus amount; Bonus expires after 60 days; Min odds of 4/5 on singles, or 2/5 per leg for acca; Some bet types excluded; See full terms.
Latest racing results
Lingfield
12:50
Full Result
2ndProfitable Dawn
14/1
3rdDiamond Dreamer
4/1F
4thSassy Redhead
11/2
Leicester
12:40
Full Result
1stThe Boat
9/4F
2ndBoagrius
9/2
3rdDreamsundermyfeet
5/1
Lingfield
12:20
Full Result
1stHuberts Dream
1/3F
2ndSouth Dakota Sioux
6/1
3rdJuryman
16/1
View All Today's Results