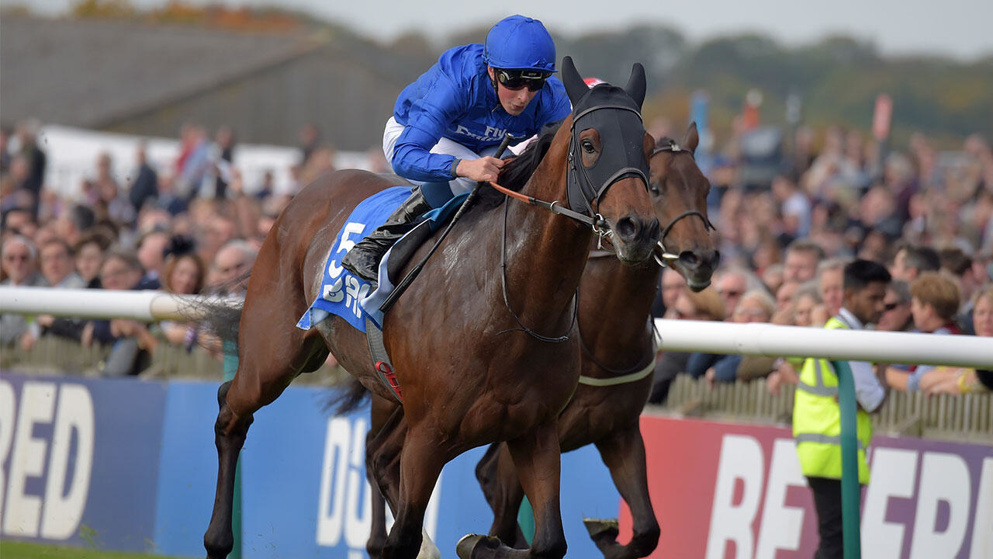 Ghaiyyath is favourite for the Group 1 Juddmonte International Stakes.

Multiple Group 1 winner Ghaiyyath is a clear favourite for the Juddmonte International Stakes, which is set to be a fascinating five-runner renewal on the opening day of York's Ebor Festival...

An impressive two and a half length winner of the Coronation Cup at Newmarket in June, Marcus Tregoning's five-year-old kicked off the Flat season in fine style by landing glory in the rearranged Group 1, but it was his fine victory in the Coral-Eclipse at Sandown Park that catapulted him into the limelight further. Sent off second favourite behind dual Prix de l'Arc de Triomphe winner Enable for the Sandown Park Group 1, Ghaiyyath adopted his front-running tactics and was not for catching as he maintained a comfortable advantage over Enable, beating the star mare by over two lengths.

Now, handed his third Group 1 assignment of the campaign, Ghaiyyath will have to get the better of five rivals on the Knavesmire in a mouth-watering Juddmonte International, and the Charlie Appleby-trained son of Dubawi is hovering around the 6/5 mark for the 15:15 showpiece. A race won by some of the finest thoroughbreds to grace a racecourse, the Juddmonte International will see older, more experienced horses taking on emerging three-year-olds, and this year's renewal is no different. Ghaiyyath is the current flagbearer for the middle distance division, and if he can emulate his Newmarket and Sandown runs he is the one they all have to beat.

Behind Ghaiyyath there's a trio of proven, top-class contenders vying for second favouritism, and the triumvirate all head to York with a host of different attributes. All hovering around the 4/1 mark, the first in question is the Aidan O'Brien-trained multiple Group winner Magical, who lines up on the back of a brace of Group 1 wins at the Curragh. A win in the Pretty Polly Stakes was followed up by a victory in the Tattersalls Gold Cup, and the Ballydoyle five-year-old will aim to add yet more glittering success to a CV awash with prestige.

While Magical brings proven class at the highest level in these all-age races, Kameko is somewhat of an unknown quantity and adds significant intrigue to the race. The three-year-old blitzed his rivals in sensational fashion when bounding to glory in the 2000 Guineas at Newmarket at the start of the season, but since then the Andrew Balding-trained raider has failed to fire. Unable to land a blow when failing to see out the trip in a strangely-run Investec Derby at Epsom, Kameko was then well-fancied for the Sussex Stakes at Glorious Goodwood. However, a troubled passage saw him gain no run whatsoever in that Group 1 event, and he failed to figure. Having failed to see out the mile and a half trip in the Derby, but sparkling over one mile in the Guineas, Kameko will tackle ten furlongs on Wednesday, and receiving weight from his older adversaries is a potential fly in the ointment.

Venturing through the handicap ranks with aplomb - winning the Cambridgeshire Handicap in rampant fashion - Lord North has quickly become a superb performer in Pattern company. A Group 3 win in the Brigadier Gerard Stakes was followed up with a scintillating success in the Group 1 Prince Of Wales's Stakes at Royal Ascot. Now, a 4/1 chance for the Juddmonte, the John Gosden-trained star will need to improve again in what is a stiff task, but with his stock continually rising he must be a notable rival to the favourite in what is sure to be a thriller.

Mark Johnston's Rose Of Kildare completes the quintet, but she's available at 66/1, at the time of writing, and while she was a winner of the Musidora at York in early July, this is a whole new ball game in terms of standard, so the betting suggests she will not only need to improve, but will need the opposition to fluff their lines.

ENABLE made a late surge to land a second place finish. 🏇 https://t.co/lzFNEoT8N4