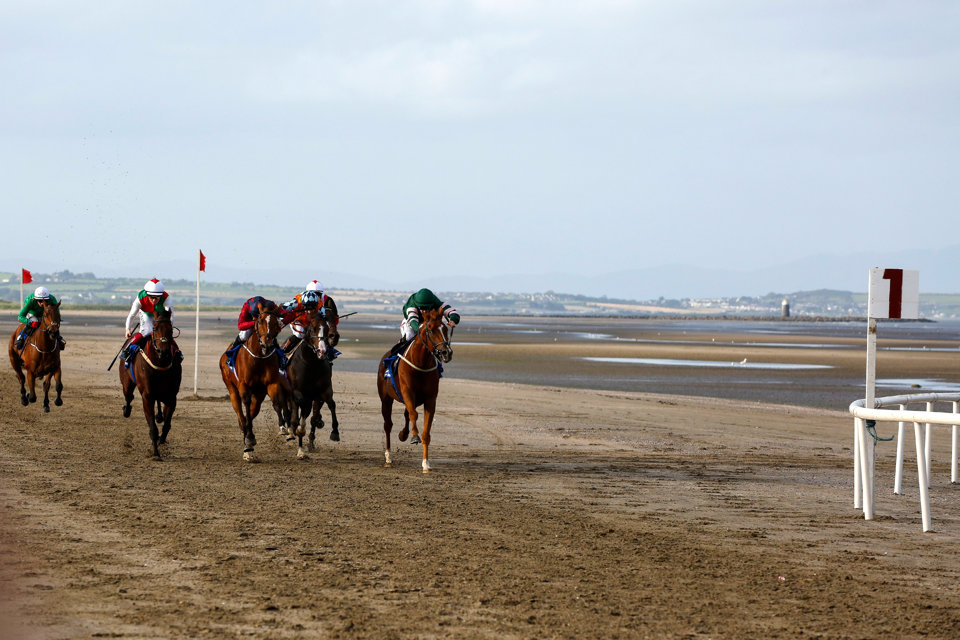 Runners battling it out on the sand at Laytown.

With Laytown set to hold its annual meeting on the beach next month, we take a closer look at the strangest race day in the British and Irish racing calendar…

Although there are plenty of different quirks and traits amongst the 60 racecourses in Great Britain and the 26 in Ireland - such as Cartmel's inside-out make-up, or the fact that Newmarket races on different courses depending on the time of the year - there’s nowhere quite like Laytown, which holds the distinction as being the only venue which holds racing under Rules on a beach - sorry, Southwell.

It would be understandable if you’d never managed to notice it in the racing calendar, too, considering that it takes place just once a year every September on the County Meath Strand; a strip of beach which is around a 40-minute drive from Dublin, and acts as a perfectly flat track for runners and riders for one day only each year.

The strip of coastline gets the full treatment for its annual race day, with stalls, rails, stewards, starters and a parade ring all popping up overnight on or around the beach area.

Established in 1868, the meeting celebrated its 150th anniversary last year and is still well-attended, with around 5000 spectators gathering on a makeshift grandstand sculpted out of the sand dunes. It is treated like any other meeting by the television channels, and Racing TV will take over responsibilities from Sky this year having secured the rights to show Irish racing.

Plenty of stars of the sport - both equine and human - have embraced Laytown over the years, and each of Joseph O’Brien, Ruby and Katie Walsh and Pat Smullen have ridden winners at the meeting, while the 2017 Supreme Novices’ Hurdle winner Labaik infamously refused to leave the stalls at the meeting in 2016, just six months before recording a shock 50/1 success at the Cheltenham Festival.

Races at Laytown used to be held at distances ranging from five furlongs to two miles, with runners rounding a u-turn when tackling longer trips, though a bad accident in 1994 brought about several changes to the meeting, and races are now held exclusively on a straight track over six and seven furlongs.

Although Aidan O’Brien has yet to train a winner at Laytown - it is the only one of Ireland’s 26 racecourses where the Ballydoyle maestro hasn’t struck - it is a popular calling point for the British trainer Jamie Osborne. A fully-paid member of the Melbourne 10 syndicate, Osborne has been known to have a runner in each race on the card in his colours, and won three races at this meeting last year.

This year’s meeting at Laytown takes place on Wednesday 11th September 2019, with racing due to start at around 4pm.