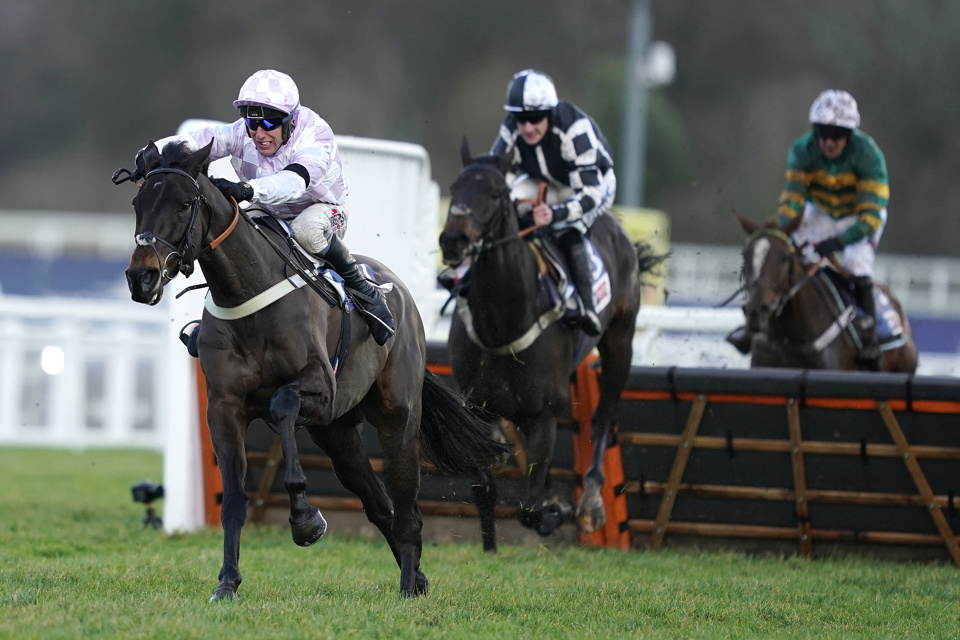 Master Debonair was an impressive winner of a Supreme Trial at Ascot last month.

In this week's column, Ed Quigley is back with three more ante-post tips for the Cheltenham Festival, including a 14/1 fancy in the curtain-raiser, the Supreme Novices' Hurdle...

With eight weeks to go until the Festival, some of the ante-post markets are starting to (belatedly take shape) and despite myself appearing to be in the minority, I still think there is plenty of value to be had attacking ante-post markets.

In the opener on March 10, I still think MASTER DEBONAIR is overpriced at 14/1. With the emergence of stable companion and Tolworth winner Fiddlerontheroof, Master Debonair seems to have been a tad forgotten. Admittedly he doesn't have Grade 1-winning form to his name, but this rapidly improving sort won in commanding style at Ascot on his penultimate start, and then on his latest foray into battle he swatted away some very smart types to land the Grade 2 Kennel Gate Novices' Hurdle with consummate ease at the same venue. His jumping is getting slicker race by race, and officially rated 151, he is right in the mix with the best novices we have seen this season. The market appears to believe that if Fiddlerontheroof goes the Supreme route then Robbie Power will ride him, but I am not totally convinced. When interviewed, Power said bullishly 'this horse breaks the hearts of others on Soft ground' and Joe Tizzard stated 'If we have a Supreme horse in the yard, then it is Master Debonair'. I think the market has it wrong.

The Mares' Hurdle has a rather uncertain look to it with plenty of the ante-post protagonists looking either doubtful runners or at present having confirmed targets elsewhere. Epatante is Champion Hurdle bound, and crucially Honeysuckle could be too depending on how she gets on at Leopardstown. Laurina would be an unlikely runner, and Dan Skelton has said that they could wait for Aintree this year with Roksana. Apple's Jade will have multiple Festival entries and has a question mark about her delivering her best performance at Prestbury Park, Stormy Ireland has come up short at top level, which leaves Benie Des Dieux - who will try and win this despite having not had a run since last May. DAME DE COMPAGNIE is a progressive mare who has two course and distance wins to her name, is versatile in regards to ground and doesn't appear to have any obvious route to go down other than the Mares' race. I think this race will cut up significantly and she rates as good value.

For one at a huge price, the Jamie Snowden-trained KILTEALY BRIGGS ticks the box. The Lambourn handler is enjoying his best season to date and the Albert Bartlett looks the logical race for his improving six-year-old. A winner of two of his four starts over hurdles, this out and out galloper is insulted by his price, and if conditions came up soft at the Festival he would be a lively contender. He finished third at the track in a Grade 2 in December over three miles, and would have been closer if not for a momentum-halter two flights from home. The form of that race doesn't look too shabby, with Mossy Fen, who was one place behind him, coming out and landing a Grade 2 at Warwick subsequently. He appears to have stamina in abundance and could easily outrun these odds when the tapes go up.

#AD New customers on mobile only. Stake min amount of £19 (odds 1.8 or greater) on any sporting event. Promotion available between 14/11/22 - 01/12/22. Max 4 x £10, 4 x £5, 1x £6 Free Bets credited on qualifying bet settlement on selected events. 1x claim per customer. Void, cashed out, partially cashed-out bets do not qualify. Each Way bets, system bets, and profit boosts are not permitted for qualifying bet. Free bets expire after 7 days of qualifying bet settlement. T&C’s Apply
get offer
Double the odds, any sport, any bet, any odds!
#AD 18+ begambleaware.org Only valid for new registrations to Grosvenor Existing members do not qualify, Bet must be placed using real money in combination with the Odds Boost Token, Offer applies to Sport bets only. Max stake is £10. Each way bets are a maximum of £5 each way (£10 total). Customers have 60 days after registration to use the Odds Boost token. T&Cs apply.
Bet £20 & Get it Back As CASH If It Loses
#AD New customers only. Place your FIRST bet on any Horse Racing market and if it loses we will refund your stake in CASH. Max refund for this offer is £20. Only deposits made using cards will qualify for this promotion. T&Cs apply.
Welcome Offer
#AD Bet £10 & Get £50 in Free Bets for new customers at bet365. Min deposit requirement. Free Bets are paid as Bet Credits and are available for use upon settlement of bets to value of qualifying deposit. Min odds, bet and payment method exclusions apply. Returns exclude Bet Credits stake. Time limits and T&Cs apply. The bonus code SPTS365 can be used during registration, but does not change the offer amount in any way.
Bet £10 Get £30 In Free Bets
#AD 18+. Play Safe. New customers using Promo code R30 only, Min £10/€10 stake,  min odds 1/2, free bets paid as 3 x £10/€10, free bets credited after settlement of first qualifying bet, free bets will expire 30 days after the qualifying bet is placed, payment method/player/country restrictions apply.
Bet £10 & Get £35 In Free Bets + £10 Multiple
#AD 18+ begambleaware.org. Place a £10 bet on Horse racing at min. odds 1/5 (1.2) — get £35 in free bets + £10 free Horse Racing Multiples Bet. Only deposits via cards will qualify, Apple pay not valid on this promotion. T&Cs apply.
Bet £10 Get £10 + £10 Casino Bonus
#AD New UK customers (Excluding NI) mobile only. £20 in FREE Bets (FB) as £10 in sports bets & a £10 casino bonus (CB). Min stake £10. Min odds Evs. FB applied on 1st settlement of any qualifying bet. FB 7 day expiry. 1 FB offer per customer, household & IP address only. Payment restrictions. 14 days to accept £10 CB, then active for 3 days. CB 5x wagering & max redeemable £100. Game restrictions apply. Cashed out/Free Bets won’t apply. 30 days to qualify. 18+.  T&Cs apply
Bet £10 Get £60 in Bonuses
#AD New UK customers only. Register using the promo code BETFRED60, deposit and place first bet of £10+ on Sports (cumulative Evens+) within 7 days of registration. First bet must be on Sports. £20 in Free Bets to be used on Sports, £10 in Free Bets to be used on Lotto and 50 Free Spins (20p per spin) credited within 48 hours of bet settlement. Further £20 in Free Bets credited 5 days after settlement. Bonuses have a 7-day expiry. Payment restrictions apply. SMS verification and/or Proof of I.D and address may be required. Full T&Cs apply.
Bet £10 Get £30 Free Bets (APP Only)
#AD New UK, IE & Malta customers only. 18+. Min £10/€10 first deposit using Debit Card or Trustly. Place a bet of £10 at min odds of 1.5. Free bets expire in 90 days. Full T&Cs apply.
Bet £10 Get £30 Free Bets + £10 Casino Bonus
#AD Minimum deposit of £10 using deposit code 30F - A qualifying bet is a ‘real money’ stake of at least £10 placed on any sports market - Minimum odds of 1/2 (1.5) - Free bets credited upon qualifying bet settlement and expire after 7 days - Free bet stakes not included in returns - Casino Bonus must be claimed within 7 days • To withdraw bonus/related wins, wager bonus amount x40 within 14 days • Wagering req. vary by game • Withdrawal restrictions and Full T&C’s apply. 18+ begambleaware.org
Bet £10 Get £30 Free Bets
#AD Offer includes a free £1 Race Index spread bet to try out our exciting 50-25-10 race markets. Place a £10 fixed odds bet at minimum odds of 1/2. Get 2 x £10 free fixed odds bets + 2 x £5 free Winning Favourites spread bets. Bet with live streaming on all racing and greyhounds! Ts&Cs Apply. 18+ begambleaware.org
£35 Free Bet + 10 Free Spins
If your account has Sportsbook losses at the end of your first day's betting, QuinnBet will refund 50% of your losses as a Free Bet up to £35 (min 3 bets) Plus 10 Free Spins. Even if your account is up, you're guaranteed a £5 Free Bet Plus 10 Free Spins provided you place at least 1 bet of £10 or greater at the minimum odds. T&Cs apply | 18+ New UK Customers Only | BeGambleAware.org
50% Up To £50 Welcome Bonus
#AD 18+ begambleaware.org; New bettors get 50% of deposit up to £50; Once per household; Min deposit £15 (no Skrill/Neteller); Wager a total of 8 times deposit + bonus, with max qualifying bet stake equal to your initial bonus amount; Bonus expires after 60 days; Min odds of 4/5 on singles, or 2/5 per leg for acca; Some bet types excluded; See full terms.
Latest racing results
Doncaster
15:32
Full Result
1stMr Barrowclough
100/30F
2ndTedtwo
11/2
3rdImperial Jade
9/2
Newcastle
15:25
Full Result
1stL'Homme Presse
6/4F
2ndInto Overdrive
7/2
3rdHappygolucky
6/1
Gowran Park
15:20
Full Result
1stKopon
14/1
2ndArdera Ru
6/1
3rdThecornerhouse
4/1
View All Today's Results