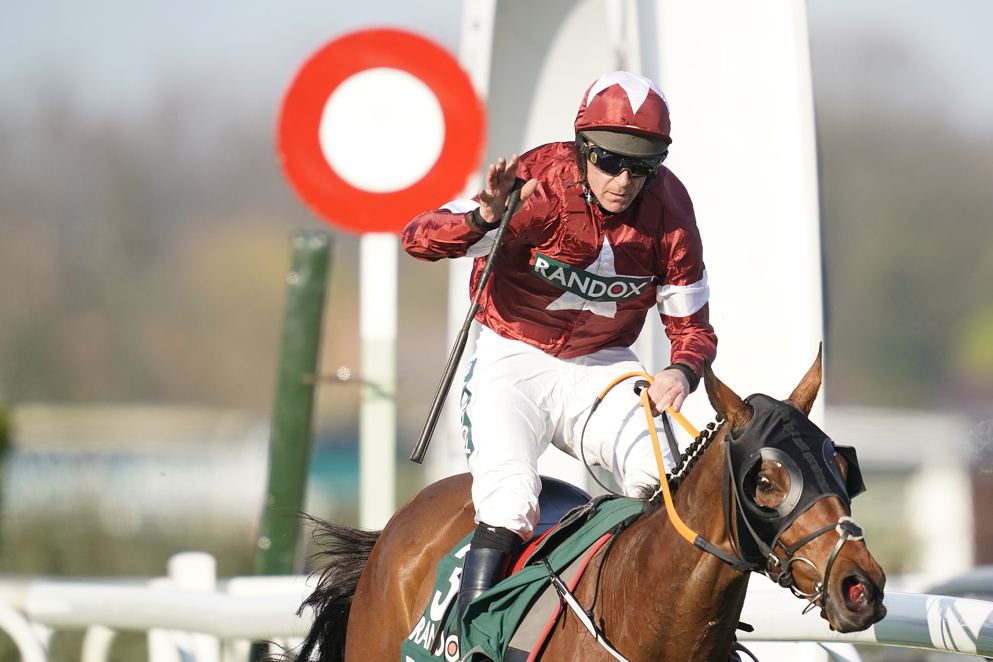 Tiger Roll will have to carry top weight in this year's Grand National.

In the latest edition of his exclusive column, Steve McManaman chats about all things Grand National, as the weights were announced in a lavish ceremony in Liverpool…

Let’s start with Tiger Roll, who returned to action at Navan on Sunday

I thought it was a very nice run; the ground was very heavy on the day, but he ran a nice reasonable race. They were all quite close together until two out, and he probably just got caught out for that little bit of sharpness in the final stages of the contest. He’s got bigger things on his plate this season, and he’s now in line for the Cross Country Chase and then the Grand National.

Thankfully, Gigginstown have now confirmed him for the Grand National, having originally threatened to swerve the race with him if the handicapper was too harsh.

Unfortunately for them, Tiger Roll was always going to be handed top weight given everything he’s been able to achieve over the past couple of seasons, and winning for consecutive years at both Cheltenham and Aintree.

It’s great that he’s been confirmed to be running, though, and it will make the Grand National even more of a spectacle with the prospect that we could see the first horse since Red Rum to win the race three times. The fact that he’s become such a people’s favourite will have been a big factor in their decision, and all the attention he gets will undoubtedly have twisted the arm of his owners.

It’s a hell of a weight to carry for such a small horse, and it’s going to be interesting to see how close he gets to completing the hat-trick. Weight is the great leveller, and even the great horses get caught up with sooner or later, so it would be some feat if he was able to complete the hat-trick in April.

Cracking Smart bounces back in no uncertain terms with victory in the Boyne Hurdle at @NavanRacecourse.

And what a run from Tiger Roll! The dual Grand National hero shows plenty of spark before tiring for fifth @gelliott_racing https://t.co/r40Coi4ztu

Meanwhile, it was a shame that we didn’t get any concrete clues for Aintree from Haydock’s Grand National Trial at the weekend.

It was particularly heavy ground at both Haydock and Ascot on Saturday, which can make the form difficult to assess. Smooth Stepper handled the conditions best and won the race well, but the fact that he doesn’t have an entry for the National means that the race couldn’t really live up to its name.

One horse who impressed me was Sir Psycho, who won the Victor Ludorum at Haydock. Some nice types have won that race over the years, and he looked a really nice promising horse with the way he was able to put the race to bed.

It’s difficult at the moment for the horses, but in a month's time, we all know the ground changes a lot and some horses will start to bloom. When it’s very heavy ground, it’s hard to take performances at face value.

We know from the past that normally on the first day of Cheltenham that the ground will come up good to soft and other horses really relish those conditions.

Finally, it was a real relief to see both Cyrname and Traffic Fluide safe and well after crashing falls in the Ascot Chase.

Cyrname’s fall was the fall of a horse who was absolutely out on his feet, and I think he was just absolutely shattered from his excursions in both the King George over Christmas, and when defeating Altior here in November.

He perhaps went a little bit too quickly in the earlier stages of the race, too - something which was shown by the fact that Traffic Fluide was able to make up so much ground on both Cyrname and Riders Onthe Storm late in the day having been outpaced round the turn for home.

However, all that matters in this business is that the horse gets up, and it was great to see both Cyrname and Traffic Fluide get up and walk away unscathed - having feared the worst.

Over to the football, and it’s interesting to see rumours about Neco Williams considering choosing England over Wales for international duty…

In terms of his ability, he’s good enough to be a future England international if he continues to progress like he has done from the age of 15 to where he is now, as he’s done so at an incredible rate. However, I think he wants to play for Wales to be very honest. He seems very Welsh when I speak to him!

However, if he keeps on improving in the way he has been, then he will definitely be good enough to play at international level. He’s an incredibly talented boy who listens and when people tell him where to improve, he goes and works on it. He’s got a great attitude and his rate of improvement over the last couple of years has been exceptional.

Meanwhile, it’s interesting to see Kai Havertz linked with a switch to Merseyside.

We’ll have to wait and see; he's a young player with plenty to improve on, who might be the type of player that Liverpool are looking at rather than a fully fledged superstar.

He is one who’s impressed in the Bundesliga this season and Jurgen Klopp certainly knows that league inside out, so he’s got a lot of people to call to get opinions on players.

Liverpool do a lot of their transfer business discreetly, and a lot of the other players were bought when we didn’t know it was happening, such as the likes of Alisson Becker and Fabinho, while Virgil Van Dijk was very much the exception.

They’re very low key when it comes to signing players they want in the summer, that’s why I take transfer rumours at the moment with a pinch of salt - and if Liverpool want to do business then they’re not going to tell anyone else about it. They’ll try and get it done before anybody else knows.

It’s why I’m surprised about the rumours linking Todd Cantwell with Liverpool.

It’s something which could certainly happen in the future, but I don’t think he’s done enough just yet to warrant playing at that kind of level. I get the fact that he wants to play at a higher level and is performing well in a struggling Norwich City team, that’s completely understandable - but it would surprise me if Liverpool were very interested in him.

Sticking with transfers, I’m very excited about the prospect of Hakim Ziyech playing in the Premier League next season.

I know he was one of Frank Lampard’s main targets, to the point that he wanted to be able to bring him into his team straight away. He’s a lovely passer of the ball and was excellent against Chelsea in the Champions League, looking very dangerous and creating plenty of chances.

It was unfortunate for Frank that they were unable to bring anybody in immediately, but at least they’ve got one of their big name players in ready for the start of next season.

It’s a big signing for Frank and it’s a really nice signing as he’s a good age, he’s got a really good profile and he’s got a good attitude.

It proved to be a rocky week over at Manchester City, however, who have been banned from the Champions League for two seasons.

It’s going to be devastating for the club to miss the next two seasons of the Champions League if that does become the end result of the disciplinary process, but first of all, we need to know all of the facts before giving our opinions on the situation.

Certain facts seem to be seeping out from various journalists who seem to be in the know, but we haven’t really heard anything from Manchester City officially yet - except that they’re going to appeal the decision.

If they’re found guilty once CAS look into it then it’s going to be incredibly damaging to the team and the reputation of the club, without a shadow of doubt; as it’s devastating from a financial perspective and it’s devastating in relation to their reputation as a club.

However, we’re going to have to know what the real story is first. At the moment we’ve only heard one side of the story and that’s via all the leaks from Der Spiegel and comments from the head of La Liga, Javier Tebas.

Raheem Sterling has already come out in support of the club, and I’ve no doubt that others will also come out in support too, On the other hand, if the ban is upheld then City are going to have to start balancing their books, so something will have to change. If that’s the selling of one player here, or another player there. But I don’t think there will be a mass exodus of players.

It doesn’t mean that they can’t win this year’s competition, and I’d make them favourites against Real Madrid.

I’ve watched Real Madrid a lot this season, and having watched them play Celta Vigo on Sunday, I’d certainly say that City are the favourites to progress from that tie. The English sides, especially Liverpool, despite their first leg defeat to Atletico Madrid, and Manchester City, are stronger than virtually all the teams in the competition. Juventus on their day could produce something, but overall when you look right across the board, then you’d say the top two English teams are going to be the strongest in this tournament.

Eden Hazard is going to be very important for Real. He’s their star man and he’s been either injured or unfit for the majority of the season, but if they need a spark, then it’s going to come from him. He’s got a huge point to prove having missed so much of the season, and if he gets back to the form that he showed in a Chelsea and Belgium shirt, he could be the catalyst to drive them forward.