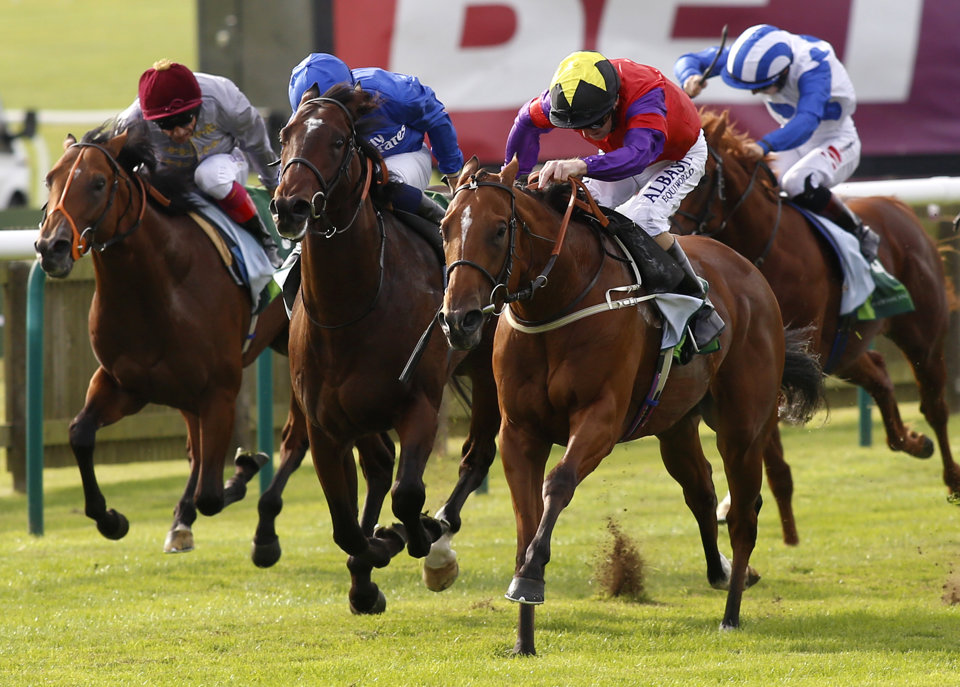 The Middle Park Stakes is the big race at Newmarket on Saturday, and Sean Raymond has picked out an each-way contender for the exciting Group 1 contest...

The great and good of the Flat racing world will descend on Newmarket this weekend for one of the best late-season cards in the sport, with the Middle Park Stakes the highlight for many.

The Cambridgeshire will be the big handicap race of the day as punters look to unpick a tough puzzle, but for quality it is the Middle Park which will rightfully take centre stage.

The Group 1 race over six furlongs is a massive prize in its own right, but it also acts a key pointer for the future, as we get to see some of the best two-year-old horses in training stake their claims for super-stardom. We are sure to see one or two classic contenders emerge this weekend at HQ, with Oasis Dream (2002), Dream Ahead (2010) and US Navy Flag (2017) among the better winners on the recent roll of honour.

It remains to be seen which horse follows in those illustrious hoof-prints in 2019, but the five-day declarations were eye-catching on Monday, which suggests that we can look forward to a top-class renewal.

Earthlight is the ante-post favourite after a thrilling run of results in France, which has seen the Shamardal colt win all four of his starts so far for Andre Fabre. The Godolphin star has certainly taken the eye, including when winning a Group 1 contest at Deauville last time out, and although this represents his toughest ask yet, the betting would suggest that he is the one to beat.

Mums Tipple would offer an almighty test of those claims, however, having produced a simply astonishing display to win at York last month. Punters who took that display even remotely seriously given the winning distance will be itching to see the Richard Hannon horse take his chance at this level, and it will be fascinating to see if Mums Tipple can back that display up on the Rowley Mile.

Worth a listen - @rhannonracing chats to @MCYeeehaaa about Mums Tipple and Threat, who both head to the Group 1 Middle Park on Saturday with very live chances… https://t.co/aRqpUcL0gy

Meanwhile, Siskin defeated Monarch Of Egypt in the Group 1 Phoenix Stakes at the Curragh last time out by less than a length, and both could rematch at Newmarket.

Siskin is unbeaten in four outings to date, and is clearly held in high regard by Ger Lyons, while the Aidan O'Brien-trained runner-up will be looking to give Ballydoyle a third consecutive win in the race after US Navy Flag won in 2017 and Ten Sovereigns scored 12 months ago.

This has the feel of a vintage renewal of the Middle Park Stakes, and it would be no surprise to see a number of these take order in the top races in 2020, either up in trip in the 2000 Guineas or in races such as the Commonwealth Cup for those colts who perhaps have a little bit more speed in the locker.

There is every chance that Mums Tipple, Siskin or Earthlight are above-average, and we could see that proven this weekend, but this will be the toughest test that any of that exciting trio have faced so far, and from a betting point of view there is one horse that sticks out at a double-figure price.

The majority of punters will be focusing on the so-called first string for Richard Hannon in the form of Mums Tipple, but the popular handler could also run Threat on Saturday - and he could prove to be rather over-looked.

The Footstepsinthesand colt has shown plenty of talent in five starts in 2019, with three wins to his name during that spell, and there are bullish reports about him from connections ahead of the big race in Suffolk. He's come out on top in successive Group 2 races the last twice, including last time out at Doncaster Races, and although this will be much tougher, there is no doubt that there's plenty of each-way value in his current price.

#AD New UK customers (Excluding NI) mobile only. £30 in FREE Bets (FB) as £20 in sports bets & a £10 casino bonus (CB). Min stake £10. Min odds Evs. FB applied on 1st settlement of any qualifying bet. FB 7 day expiry. 1 FB offer per customer, household & IP address only. Payment restrictions. 14 days to accept £10 CB, then active for 3 days. CB 5x wagering & max redeemable £100. Game restrictions apply. Cashed out/Free Bets won’t apply. 30 days to qualify. 18+. T&Cs apply
get offer
Bet £10 get £30 in Free Bets
#AD New customers on mobile only. 7 days to claim and stake £10 minimum bet at odds of 1.5 or greater to qualify. Free, void, cashed out or partially cashed out bets do not qualify. Max 3x £10 free bets credited on bet settlement. Free bets must be used on 4 or more selections with selection odds of 1.3 or greater. Free bets are non-withdrawable, and stake not returned with winnings. 7 day expiry. 18+BeGambleAware.org. T&Cs apply.
Double the odds, any sport, any bet, any odds!
#AD 18+ begambleaware.org Only valid for new registrations to Grosvenor Existing members do not qualify, Bet must be placed using real money in combination with the Odds Boost Token, Offer applies to Sport bets only. Max stake is £10. Each way bets are a maximum of £5 each way (£10 total). Customers have 60 days after registration to use the Odds Boost token. T&Cs apply.
Bet £20 & Get it Back As CASH If It Loses
#AD New customers only. Place your FIRST bet on any Horse Racing market and if it loses we will refund your stake in CASH. Max refund for this offer is £20. Only deposits made using cards will qualify for this promotion. T&Cs apply.
Welcome Offer
#AD Bet £10 & Get £50 in Free Bets for new customers at bet365. Min deposit requirement. Free Bets are paid as Bet Credits and are available for use upon settlement of bets to value of qualifying deposit. Min odds, bet and payment method exclusions apply. Returns exclude Bet Credits stake. Time limits and T&Cs apply. The bonus code SPTS365 can be used during registration, but does not change the offer amount in any way.
Bet £10 Get £30 In Free Bets
#AD 18+. Play Safe. New customers using Promo code R30 only, Min £10/€10 stake,  min odds 1/2, free bets paid as 3 x £10/€10, free bets credited after settlement of first qualifying bet, free bets will expire 30 days after the qualifying bet is placed, payment method/player/country restrictions apply.
Bet £20 & Get it Back As CASH If It Loses
#AD 18+ begambleaware.org Max £20 refund on first bet. Bet must be placed in first 7 days of account opening. Only deposits made via Debit Card will be eligible for the promotion. T&Cs apply.
Bet £10 Get £60 in Bonuses
#AD New UK customers only. Register using the promo code BETFRED60, deposit and place first bet of £10+ on Sports (cumulative Evens+) within 7 days of registration. First bet must be on Sports. £20 in Free Bets to be used on Sports, £10 in Free Bets to be used on Lotto and 50 Free Spins (20p per spin) credited within 48 hours of bet settlement. Further £20 in Free Bets credited 5 days after settlement. Bonuses have a 7-day expiry. Payment restrictions apply. SMS verification and/or Proof of I.D and address may be required. Full T&Cs apply.
Bet £10 Get £30 Free Bets (APP Only)
#AD New UK, IE & Malta customers only. 18+. Min £10/€10 first deposit using Debit Card or Trustly. Place a bet of £10 at min odds of 1.5. Free bets expire in 90 days. Full T&Cs apply.
Bet £10 Get £30 Free Bets + £10 Casino Bonus
#AD Minimum deposit of £10 using deposit code 30F - A qualifying bet is a ‘real money’ stake of at least £10 placed on any sports market - Minimum odds of 1/2 (1.5) - Free bets credited upon qualifying bet settlement and expire after 7 days - Free bet stakes not included in returns - Casino Bonus must be claimed within 7 days • To withdraw bonus/related wins, wager bonus amount x40 within 14 days • Wagering req. vary by game • Withdrawal restrictions and Full T&C’s apply. 18+ begambleaware.org
Bet £10 Get £30 Free Bets
#AD Offer includes a free £1 Race Index spread bet to try out our exciting 50-25-10 race markets. Place a £10 fixed odds bet at minimum odds of 1/2. Get 2 x £10 free fixed odds bets + 2 x £5 free Winning Favourites spread bets. Bet with live streaming on all racing and greyhounds! Ts&Cs Apply. 18+ begambleaware.org
£35 Free Bet + 10 Free Spins
If your account has Sportsbook losses at the end of your first day's betting, QuinnBet will refund 50% of your losses as a Free Bet up to £35 (min 3 bets) Plus 10 Free Spins. Even if your account is up, you're guaranteed a £5 Free Bet Plus 10 Free Spins provided you place at least 1 bet of £10 or greater at the minimum odds. T&Cs apply | 18+ New UK Customers Only | BeGambleAware.org
50% Up To £50 Welcome Bonus
#AD 18+ begambleaware.org; New bettors get 50% of deposit up to £50; Once per household; Min deposit £15 (no Skrill/Neteller); Wager a total of 8 times deposit + bonus, with max qualifying bet stake equal to your initial bonus amount; Bonus expires after 60 days; Min odds of 4/5 on singles, or 2/5 per leg for acca; Some bet types excluded; See full terms.
Latest racing results
Chelmsford
20:30
Full Result
1stMichaela's Boy
9/4F
2ndRocking Ends
14/1
3rdGrace Angel
5/2
Chelmsford
20:00
Full Result
1stMiss Belladonna
17/2
2ndSpanish Angel
4/1
3rdEmbla
14/1
Chelmsford
19:30
Full Result
1stLa Roca Del Fuego
6/1
2ndYimou
4/1
3rdBang On The Bell
11/1
View All Today's Results