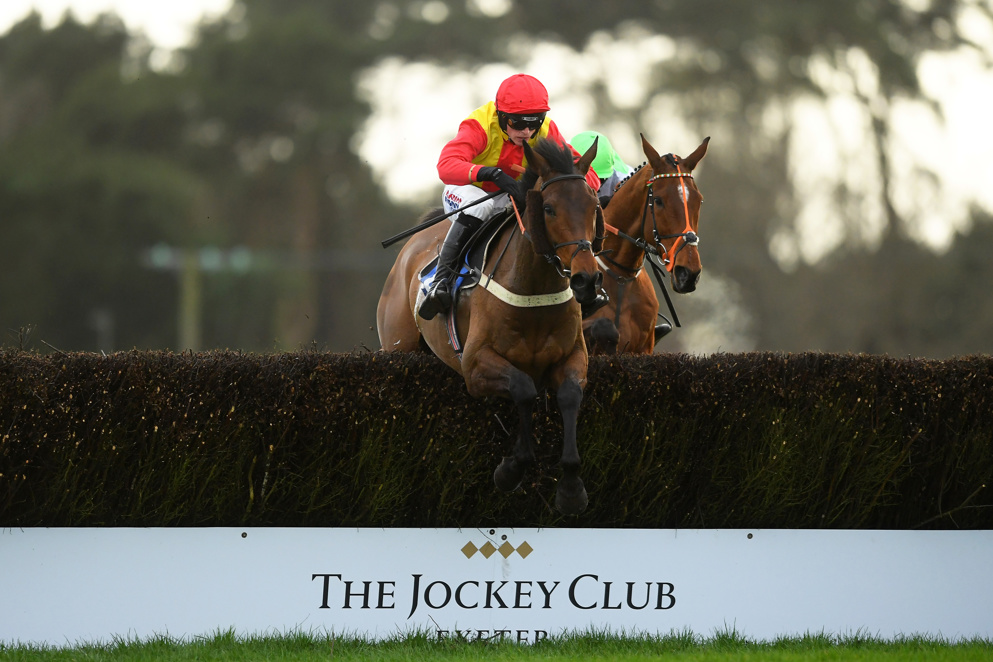 Christmas In April is building up a portfolio of wins in regional versions of the Grand National, winning the Devon National at Exeter last month.

With the Cheltenham Festival now over for another year, Nick Seddon previews Saturday’s Midlands Grand National at Uttoxeter, which provides one of the biggest tests of stamina in the Jumps racing schedule...

While Cheltenham has continued this week with the ‘stiff upper lip’ approach that we’ve come to expect from horse racing, the impact of the COVID-19 pandemic on the sporting world has continued to grow.

However, until we’re told otherwise, the racing will go on, and Uttoxeter gears up to host the Midlands National, which is their feature race of the year. The four and a quarter mile trip is about as stern as it gets in terms of stamina tests in the sport, and with heavy going forecast for tomorrow afternoon, this will be seriously attritional.

The Midlands National is one of several regional variations of the Aintree spectacular that take place around the country, and this sphere is filled with familiar names. One horse who’s quickly making the staying chasing division his own is the Paul Nicholls-trained Truckers Lodge, who was a fine second on his most recent start in the Welsh National at Chepstow in December. He’s still a novice, and although he’s had just four starts over fences to date, stamina is very much his forte. Indeed, Truckers Lodge seems likely to become a staple in these types of races, and ought to go close here having been raised just 2 lb by the handicapper for his most recent outing.

The @Coral Welsh Grand National goes to Wales! Potters Corner puts up a brave performance to win the feature event for @CWilliamsRacing and @jacktudor9 at @Chepstow_Racing https://t.co/nAfnyeQljm

Another who can boast strong form in handicaps this term is De Rasher Counter, who won the Ladbrokes Trophy at Newbury back in November. He found Grade 2 company too hot to handle in the Cotswold Chase at Cheltenham last time out, and although the return to handicap company will suit, his revised mark of 157 is a hefty one, and he faces some task conceding a truckload of weight to the field.

More interesting is Petite Power, who arrives here in really good heart. The 11-year-old has thrived for the step up to marathon trips the last twice, finishing a fine third in the Classic Chase at Warwick last time out. The extra half a mile or so he’ll face here is a step into the unknown, but there’s every reason to think he’ll handle the extra distance, and allowed to take his chance off the same mark as last time, he’s one to consider from out of the handicap.

Three more regulars in this sphere are Prime Venture, Joe Farrell and Potters Legend. The last-named perhaps doesn’t win as often as he should, and has been rather hit and miss so far this season. That being said, he took a step back in the right direction when third at Doncaster last time, and is one to consider now just 2 lb higher than his last winning mark. Joe Farrell is another in this field with National-winning form, having won the Scottish version at Ayr in April 2018, and although he hasn’t won since, he’s been holding his own fairly well in some tough assignments - including when seventh when last seen in the Ladbrokes Trophy. Like Potters Legend, he’s beginning to slip down the weights, and could well be back down to an interesting mark for the Rebecca Curtis team, who enjoyed a rare winner at the Festival during the week. Meanwhile, it’s well over two years since Prime Venture last got his nose in front, and although he’s likely on a workable mark, he’s difficult to trust at present.

This is wide open, and four more to consider are Very First Time, Captain Drake, Sheneededtherun and Dominateur. The last-named arrives here on a roll, having won three of his last four starts. The Skeltons have a fabulous strike-rate at Uttoxeter, and this improving eight-year-old certainly can’t be discounted, having won in really good style over three miles at Doncaster last time. However, he’s unproven at this extreme distance, and arrives here off a career high mark - a comment which can also be applied to the mare Sheneededtherun, who has won her last four, but is 11 lb higher than for her last success. The novice Captain Drake has failed to complete in two of his last three starts, but he’s an improving type who can’t he discounted off his current mark, while fellow novice Dominateur struggled in graded company at Wetherby last time, but this is much more suitable an assignment, and he’s another to consider.

However, as mentioned above, having form in regional variations of the Grand National tends to count for plenty here, and it looks worth siding with the Colin Tizzard-trained Christmas In April, who already has wins in two variations of the Grand National to his name this year. The first of those came in the Sussex National at Plumpton in January, and having looked unsuited by the drop back to three miles and a furlong on his next start, he relished the three and three quarter mile test to come out on top in a gruelling renewal of the Devon National at Exeter last time out. He produced his best effort yet to return to winning ways that day, winning with something in hand in the process, and an 8 lb rise for that looks more than fair. Indeed, Christmas In April relishes a thorough test of stamina, and bearing in mind that there could be more to come from this upwardly-mobile type yet, he’s fancied to win his third ’National’ in as many months.

Christmas In April likes a National!