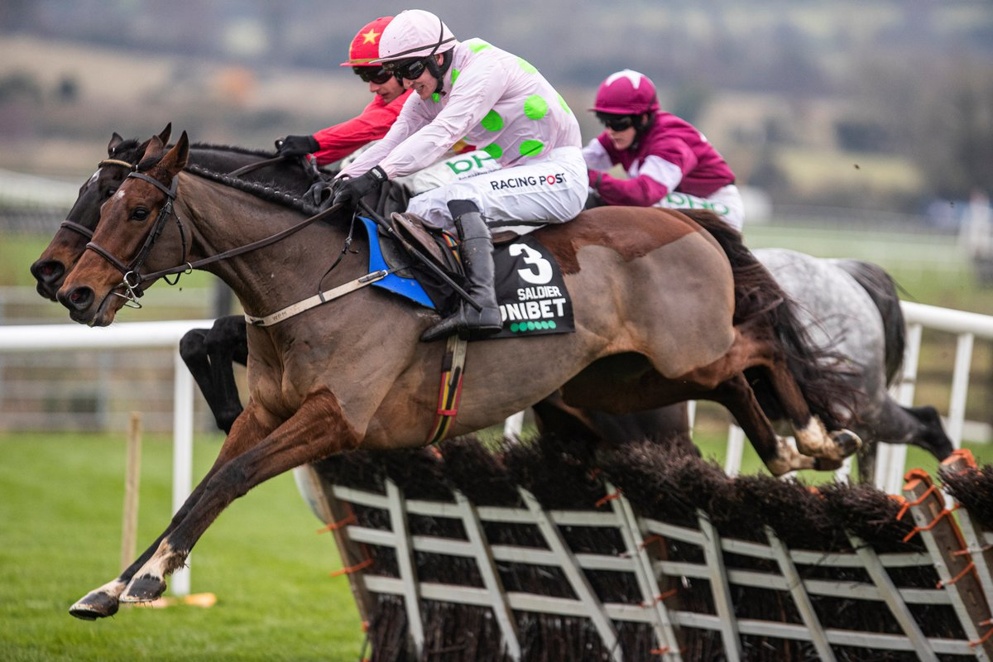 Nick Seddon previews Sunday’s Grade 1 Morgiana Hurdle at Punchestown, and picks out his best bet in the race…

While most eyes will undoubtedly be on Cheltenham’s November Meeting this weekend, there’s an excellent two-day meeting on the other side of the Irish Sea at Punchestown, which is headlined by the Grade 1 Morgiana Hurdle.

Seen as a strong early season indicator for the Champion Hurdle next March, the Morgiana is a popular starting point for some of Ireland’s best hurdlers, and two winners of this race have gone on to follow up at the Festival this century.

It regularly proves to be a tight betting heat, and heading the market at the time of writing is last season’s County Hurdle winner, Saint Roi. A lightly-raced type, the five-year-old improved at a rate of knots in his three starts for Willie Mullins last season, building on an impressive maiden success at Tramore in January by storming to a four and a half length victory on handicap debut at the Festival.

He was a long way ahead of his mark that day, and that Cheltenham form has worked out particularly well since, with the runner-up, his stablemate Aramon, producing a high-class performance to win the Galway Hurdle off top weight in July. It didn't take Saint Roi long to prove that he's more than at home in Graded company, either, and he extended his winning sequence to three when comfortably winning a Grade 3 contest on reappearance at Tipperary last month. He’s entitled to try his hand at this level now, and has strong clams here bearing that he is open to more improvement yet after just five career starts over timber, though he will almost certainly need a career best effort take this, and looks short enough in the betting as an even money favourite - on what's his toughest task to date.

He was thrown in!

The second favourite in the betting is the Supreme Novices' Hurdle runner-up Abacadabras, who represents the Gordon Elliott team. A Grade 1 winner as a novice last year, Abacadrabas has some smart form under his belt, and will arrive here fit after finishing second on reappearance in the Grade 2 WKD Hurdle at Down Royal at the beginning of the month. He is entitled to come on for that run here, and would be a serious threat if replicating his performance in the Supreme, though he was ultimately well held by Aspire Tower last time out, and will need more to take this.

Three more who are set to line up are Coeur Sublime, Jason The Militant and Supasundae. The last-named is a three-time winner at Grade 1 level, including over course and distance in April 2018, and he'd have claims if bringing his best form to the table. However, he's rising 11 these days, and struggled on reappearance at Navan last week.

Coeur Sublime is a smart performer on his day, winning last year's WKD Hurdle at Down Royal, and although he's lightly-raced for his age, he was down the field in the Champion Hurdle in March, and would need plenty more here. Meanwhile, Jason The Militant was a Grade 2 winner as a novice at Naas in February, though was well held on reappearance at that level last month, and he would need a career best if he is to strike.

Instead, it looks worth siding with Saint Roi's stablemate Saldier at the prices, who's aiming to win this race for the second year running. Saldier has had no luck with injuries over the past couple of years, but when he has made the track he has certainly made an impact, and looked to have the measure of a future Champion Hurdle winner in Espoir d'Allen when falling at the last in a Grade 3 contest at Naas two starts ago in November 2018.

We've seen him just once since, when accounting for a smart field that included Sharjah, Klassical Dream and Petit Mouchoir in good style in this race 12 months ago. He sets a clear standard on that form, and bearing in mind that he won this off the back of a similar absence last year, he looks a good bet at 5/1 to win this for the second year running.

On his first start for over a year, Saldier storms home to win the @UnibetRacing Morgiana Hurdle at @punchestownrace, with Supreme Novices' Hurdle winner Klassical Dream only third! 👏

A tenth victory in the Grade One contest for @WillieMullinsNH! 🏆 https://t.co/st98dCFeeA

#AD 18+ begambleaware.org; New bettors get 100% of deposit up to £50; Once per household; Min deposit £15 (no Skrill/Neteller); Wager a total of 8 times deposit + bonus, with max qualifying bet stake equal to your initial bonus amount; Bonus expires after 60 days; Min odds of 4/5 on singles, or 2/5 per leg for acca; Some bet types excluded; Free spins validity: 7 days; Free spins max. winnings = £100; See full terms; Terms apply.
get offer
Bet £10 Get £30 In Free Bets
#AD 18+. Play Safe. New customers using Promo code H30 only, Min £10/€10 stake,  min odds 1/2, free bets paid as 2 x £15/€15, free bets credited after  settlement of first qualifying bet, free bets will expire 30 days after  the qualifying bet is placed, payment method/player/country restrictions apply.
Bet £10 Get £30 Free Bets (APP Only)
#AD New UK, IE & Malta customers only. 18+. Min £10/€10 first deposit using Debit Card or Trustly. Place a bet of £10 at min odds of 1.5. Free bets expire in 90 days. Full T&Cs apply.
Welcome Offer
#AD Bet £10 & Get £50 in Free Bets for new customers at bet365. Min deposit requirement. Free Bets are paid as Bet Credits and are available for use upon settlement of bets to value of qualifying deposit. Min odds, bet and payment method exclusions apply. Returns exclude Bet Credits stake. Time limits and T&Cs apply. The bonus code SPTS365 can be used during registration, but does not change the offer amount in any way.
Bet £10 Get £60 in Bonuses
#AD New UK customers only. Register using the promo code BETFRED60, deposit and place first bet of £10+ on Sports (cumulative Evens+) within 7 days of registration. First bet must be on Sports. £20 in Free Bets to be used on Sports, £10 in Free Bets to be used on Lotto and 50 Free Spins (20p per spin) credited within 48 hours of bet settlement. Further £20 in Free Bets credited 5 days after settlement. Bonuses have a 7-day expiry. Payment restrictions apply. SMS verification and/or Proof of I.D and address may be required. Full T&Cs apply.
Bet £20 & Get It Back As CASH If It Loses
#AD New customers only. Place your FIRST bet on any Horse Racing market and if it loses we will refund your stake in CASH. Max refund for this offer is £20. Only deposits made using cards will qualify for this promotion. T&Cs apply.
Money Back As Cash Up To £20
#AD Max £20 refund on first bet. Bet must be placed in first 7 days of account opening. Only deposits made via Debit Card will be eligible for the promotion. T&Cs apply. 18+ begambleaware.org
Bet £10 Get £30 Free Bets + £10 Casino Bonus
#AD Minimum deposit of £10 using deposit code 30F - A qualifying bet is a ‘real money’ stake of at least £10 placed on any sports market - Minimum odds of 1/2 (1.5) - Free bets credited upon qualifying bet settlement and expire after 7 days - Free bet stakes not included in returns - Casino Bonus must be claimed within 7 days • To withdraw bonus/related wins, wager bonus amount x40 within 14 days • Wagering req. vary by game • Withdrawal restrictions and Full T&C’s apply. 18+ begambleaware.org
Bet £10 Get £30 Free Bets
#AD Offer includes a free £1 Race Index spread bet to try out our exciting 50-25-10 race markets. Place a £10 fixed odds bet at minimum odds of 1/2. Get 2 x £10 free fixed odds bets + 2 x £5 free Winning Favourites spread bets. Bet with live streaming on all racing and greyhounds! Ts&Cs Apply. 18+ begambleaware.org
Bet £10 Get £10 + £10 Casino Bonus
#AD New UK customers (Excluding NI) mobile only. £20 in FREE Bets (FB) as £10 in sports bets & a £10 casino bonus (CB). Min stake £10. Min odds Evs. FB applied on 1st settlement of any qualifying bet. FB 7 day expiry. 1 FB offer per customer, household & IP address only. Payment restrictions. 14 days to accept £10 CB, then active for 3 days. CB 5x wagering & max redeemable £100. Game restrictions apply. Cashed out/Free Bets won’t apply. 30 days to qualify. 18+.  T&Cs apply
£25 Free Bet + 10 Free Spins
If your account has Sportsbook losses at the end of your first day's betting, QuinnBet will refund 50% of your losses as a Free Bet up to £25 (min 3 bets) Plus 10 Free Spins on Asgard Warriors. Even if your account is up, you're guaranteed a £5 Free Bet Plus 10 Free Spins provided you place at least 1 bet of £10 or greater at the minimum odds. T&Cs apply | 18+ New UK Customers Only | BeGambleAware.org
Latest racing results
Thurles
15:10
Full Result
1stSpeckled Meadow
6/1
2ndStormie Outlook
9/2F
3rdQaabil
7/1
Ayr
15:00
Full Result
1stAberama Gold
6/1
2ndClassy Al
9/1
3rdPearl Of Qatar
28/1
Warwick
14:50
Full Result
1stTwig
13/8
2ndTrixster
4/1
3rdJudge Earle
11/10F
View All Today's Results