Clan Des Obeaux 'in a good place' ahead of Gold Cup 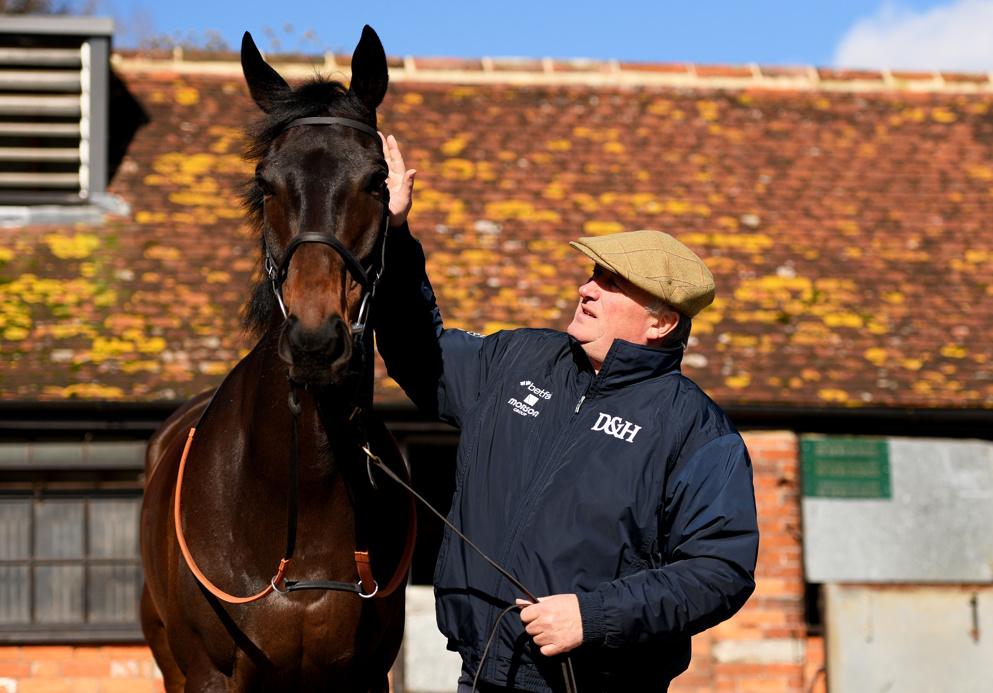 Paul Nicholls with Clan Des Obeaux at Ditcheat on Thursday.

Paul Nicholls was extremely bullish about Clan Des Obeaux's chances in the 2020 Cheltenham Gold Cup when discussing his chances in front of the media on Thursday...

The eight-year-old served up a sensational 21-length beating of last year's top-rated National Hunt horse and stablemate Cyrname en route to his second King George VI Chase win at Kempton Park on Boxing Day, and Nicholls reports the Kapgarde gelding to be 'in a good place' ahead of the Gold Cup on March 13.

When quizzed about Clan Des Obeaux's under-achievements at Cheltenham (no wins in five visits to Prestbury Park), Nicholls was quick to liken the current Ditcheat top dog to and old superstar in dual Cheltenham Gold Cup-winner Kauto Star.

Nicholls said: "Until Kauto won he had the same sort of record. Those sorts of things are there to be proven wrong, he hasn’t run badly at Cheltenham and he should never have run in the Triumph Hurdle (sixth of 15 runners) - he was just there as the owner wanted him to run - and then ran well in novice chases. He always run well here, he ran well in the Gold Cup (fifth of 16 runners) last year, he doesn’t not act on the track and he’s just a different horse this year."

Rather than ponder on Clan Des Obeaux's past experiences at Prestbury Park, Nicholls was quick to point to his raider's dominant victory in the King George VI Chase over the Christmas period.

"In the King George over three miles, he stayed on and Sam (Twiston-Davies) couldn’t pull him up, and he looked particularly impressive this morning. He’s in a good place, and we’ve learned that a different preparation helps, but until he wins at Cheltenham they’ll say he doesn’t act at Cheltenham, but that’s the same with every horse," added Nicholls.

Turning his attentions to the opposition set to line up in the Cheltenham Festival showpiece on March 13, Nicholls is very wary of reigning champion Al Boum Photo, while a couple of novice chasers that finished behind Nicholls own Topofthegame last season in the RSA Chase are also at the forefront of Nicholls' mind.

He said: "I think last year’s winner is probably the one to beat, if they’ve had a good preparation with him and the two that ran in the RSA obviously - Delta Work and Santini - are two decent horses. Lostintranslation has got a bit to prove in my book, and any Gold Cup’s good, but I think those four ones are the main contenders on form.

"I’m very happy with the prep we’ve had with him, and the way he went this morning (when working at Wincanton on Thursday morning) and the way he looks. He's been good each time he’s had a gap, and the improvement from Haydock to Kempton last year was huge - and Down Royal to Kempton this season. We don’t need improvement from Kempton to Cheltenham, but I know how to train him now.

"I think Clan’s got a leading chance and he’s my best chance!" concluded an ebullient Nicholls.