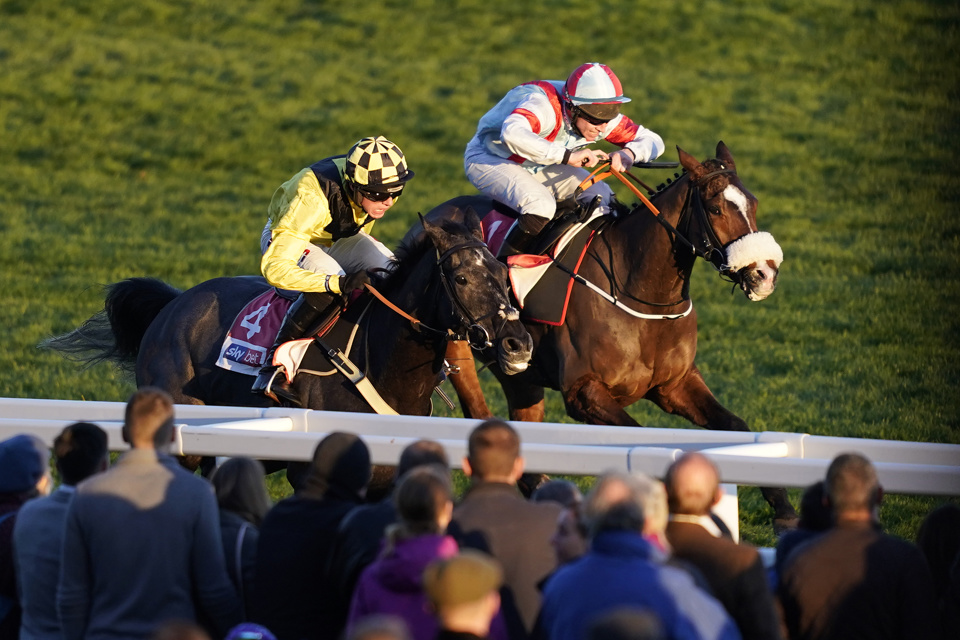 Itchy Feet (far side) looks to have a fine chance in Thursday's Marsh Novices' Chase.

Having picked out two winners on Wednesday afternoon, Nick Seddon returns to run the rule over the third day of the Cheltenham Festival, which is headlined by the Stayers’ Hurdle…

It would be some story if the 12-year-old Faugheen could seal an emotional success here, though romance is regularly trumped by logic, and with Father Time surely on the brink of catching up with him, a far more appealing option is the Olly Murphy-trained Itchy Feet. He took the giant leap into Grade 1 company in his stride when running out a deeply impressive winner of last month’s Scilly Isles Novices’ Chase at Sandown, and with there likely to be more to come from him yet on just his third start over fences, he’s a confident pick to take this.

This is one of the most competitive handicaps of the entire week, though one who makes more appeal than most is the mare Relegate. The 2018 Champion Bumper winner shaped with plenty of promise on her first start in handicap company when fourth in a qualifier for this at Punchestown last month, looking on a good mark in the process. She’s up 7 lb for that here, though it would be no surprise should there be more to come from her yet on just her second start for Colm Murphy - who is no stranger to success at the Cheltenham Festival. With a strong pace assured, Relegate ought to be staying on better than most in the closing stages. The Storyteller is perhaps better known for his chasing exploits, but arrives here on a dangerous mark and is respected, while there was plenty to like about Welsh Saint’s effort to win a qualifier at Haydock last month, and he’s one of any number of alternatives who could play a part.

Logic will tell you that the upwardly-mobile A Plus Tard is the one to beat here, having taken the scalp of Chacun Pour Soi on his most recent start at Leopardstown in December, but some allegiances are tough to break, and this weary writer is willing to give yet another chance to the mercurial Min. Admittedly, he’s yet to win at the Cheltenham Festival in three attempts, but he’s produced two excellent efforts to chase home Altior in that time, and is a bona fide top-class performer on his day. Again, he had no excuses when put firmly in his place by stablemate Chacun Pour Soi in last month’s Dublin Chase, but two and a half miles looks far more like his domain these days - something he showed when winning the John Durkan Chase at Punchestown in December - and bearing in mind that he could be allowed the run of things in front this afternoon, he - like Politologue the day before him - can take advantage of Altior’s absence by having a well-deserved moment in the sun. Meanwhile, last year’s winner Frodon can’t be discounted on his follow-up bid, and although he’s a wonderfully game and consistent type, this year’s task is tougher, and Min really ought to show his class.

It would take a hardy soul to oppose the defending champion Paisley Park, who racked up a seventh straight win when flooring his opposition in the Cleeve Hurdle here in January, but two horses have to place behind him, and Emitom makes plenty of appeal each-way. He looks the likeliest challenger to the favourite after a deeply impressive victory in last month’s Rendlesham Hurdle at Haydock, and there ought to be more to come yet from this improving six-year-old. He will probably need a chunk of improvement in order to spoil the party, but either way, it’s difficult to see him finishing outside of the places, and there’s plenty of value in the 12/1 on offer with some firms.

Simply The Betts is all the rage for this after his fine effort to win a competitive affair here on Trials Day, form which was duly boosted by Imperial Aura in the novices’ handicap on Tuesday afternoon. It’s difficult to pick holes in his claims, though there is no value in his current price for such a competitive affair, and a bigger-priced alternative is the Dan Skelton-trained Oldgrangewood. He too has course and distance form under his belt, showing a good attitude to defeat several smart types here on New Year’s Day. A 5 lb rise in the weights for that looks fair, and although he’s only just done enough to come out on top the last twice, he has a fine rapport with Harry Skelton, and should be on the premises once again.

It will take a brave punter to oppose the all-conquering Willie Mullins here, considering that he’s won all four runnings of this race to date, though he was outfoxed by Henry de Bromhead in Tuesday’s Mares’ Hurdle, and Minella Melody looks a fine proposition here. She can boast the exact same connections as a certain Honeysuckle, and will take all the beating here having won a Grade 3 contest at Fairyhouse last time out - completing a hat-trick in the process. Each of Concertista, Colreevy and Dolcita deserve plenty of respect for the aforementioned Mullins.

Thursday’s finale is for amateur riders, and it is no stranger for causing a surprise - throwing up a 40/1 winner as recently as 2017. One who makes plenty of appeal at a bigger price here is the Warren Greatrex-trained Bob Mahler, who looks tailor made for this test. Greatrex struck in this race with Missed Approach two years ago on the back of a second-placed effort in the Edinburgh National at Musselburgh, and Bob Mahler has taken the exact same path as his stablemate to this race, except he was victorious up in Scotland. A 5 lb rise for that success looks more than fair, and with stamina assured, expect him to make plenty of late gains.