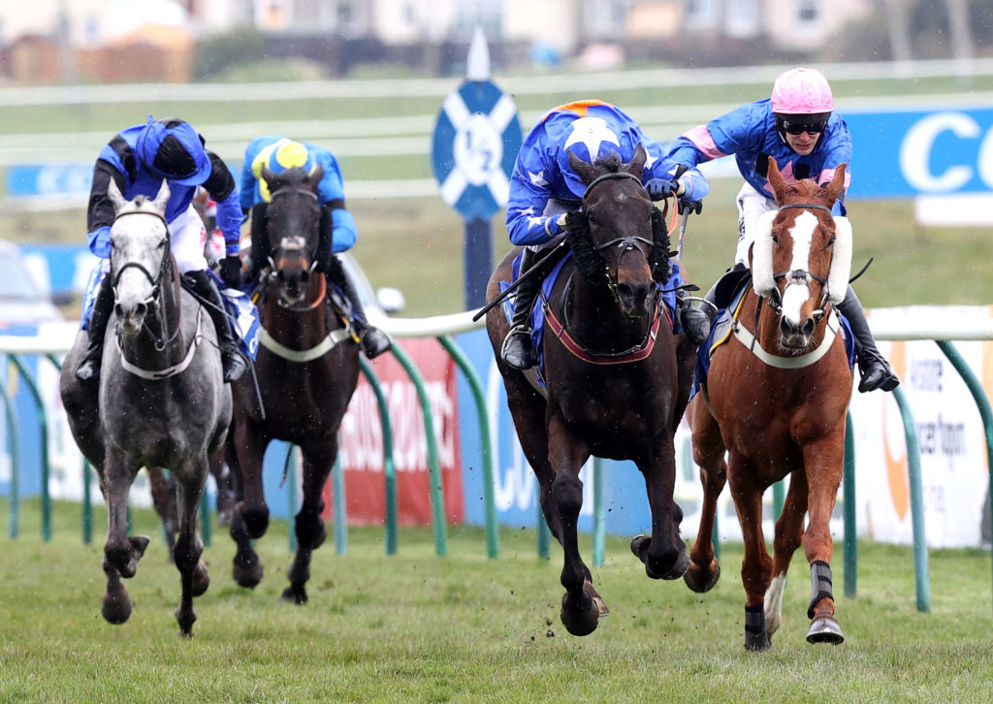 A field of 24 are set to take their chance in the biggest race north of the border, the Scottish Grand National. As is to be expected, it looks a tricky puzzle for punters to solve, but our man Billy Grimshaw thinks he has found the winner...

Last season this race took place in an eerily quiet amphitheatre as Covid regulations meant no spectators were allowed into Ayr racecourse. If it were a full house, as we expect for the 2022 renewal, then the roof would undoubtedly have been raised as Scottish trainer Mighty Thunder reeled in long time leader Dingo Dollar to claim the prestigious race for trainer Lucinda Russell. He was in the field for a while but looks set for Aintree now and in his absence it is not a Scottish home team that looks strong, but a Welsh raiding party from the Christian Williams stable who are leading the market.

Firstly, the current favourite is KITTY'S LIGHT. The gelding has found victories hard to come by this season, but in some of his placed efforts has shown qualities that undoubtedly strike him out as an ideal Scottish National type. His stamina laden profile has been clear to see in these runs with late staying-on efforts the running theme after sometimes being taken off his feet by more speedier types. He comes in off an attractive looking weight and under Jack Tudor he looks likely be in the mix come the finish. STORMY JUDGE for Pat Fahy is one of the next contenders in the market and is seemingly the best of the Irish challenge if the market is to be believed. He has man of the moment Danny Mullins to aid his quest for Scottish National glory and his form from around the turn of the year warrants respect. He is a half brother to last year's third Mister Fogpatches for the same yard.

Another Fahy runner set to take his chance is HISTORY OF FASHION who is bona fide staying chaser. His trainer recently told the Racing Post: "In all his races, he seems to be only getting going when it's all over, so you'd imagine the trip would certainly suit him." This is as clear of an endorsement for his credentials in the near four mile test at Ayr as you can ask for and he is a temptingly big price to at least make the frame for a shrewd set of connections. Last season THE FERRY MASTER was bang there in contention until slightly weakening after the second last and not being able to go with the winner. Another season's training and experience could mean his stamina wells have got slightly deeper and if that is the case he is another worthy of the each-way shortlist.

The Alan King team have really started to hit form recently and of course were successful at Cheltenham with stable star Edwardstone. He looks to send the inexperienced MISTER DUNDEE to victory in this contest and with only three runs over fences to his name he may find this all coming too soon, if he is as unexposed as his connections must hope he could have plenty in hand and show a class edge over the rest. THE WOLF looks set to line up for Olly Murphy and he is another who has been running over marathon trips for a while now, putting in a solid effort last time out when second at Musselburgh over 3m7f in the Edinburgh National. Dan Skelton will saddle ASHTOWN LAD with brother Harry on board, and the novice was last seen proving no match for Ahoy Senor. He is another who lacks experience but could be unexposed at this trip.

A result that really would send the Scottish crowd wild would be if the now twelve year old VINTAGE CLOUDS were to come home in front for Scottish trainer Sue Smith. The 2021 Ultima winner was not at his best when attempting to repeat the feat in 2022 and will have to lump a big weight around Ayr, but if he gets into his bold front-running rhythm it'll be some sight to see and there would be no more popular winner than the current 33/1 chance.

The one I like is the other Christian Williams runner, WIN MY WINGS. With four wins from her last six starts, Win My Wings is a mare who has been on the up this campaign. I was seriously impressed with her last performance, routing a field full of dour stayers in the Eider Chase at Newcastle. A victory over four miles that day up on Tyneside shows this trip will be light work for the nine-year-old. She was raised eight pounds for this commanding victory but the shrewd Williams has booked the most coveted amateur from the Cheltenham Festival Rob James to take off 7lbs and almost nullify the rise in the weights. I think there is still plenty to come from this progressive chaser and she can keep her winning momentum rolling and bag another big prize for connections.

won
13/2
Grand National Odds
ITV Racing Tips: Most tipped selections for the Irish 1000 Guineas and action from the Sunday Series at York
By Russell Palmer

#AD 18+. Play Safe. New customers using Promo code H30 only, Min £10/€10 stake,  min odds 1/2, free bets paid as 2 x £15/€15, free bets credited after  settlement of first qualifying bet, free bets will expire 30 days after  the qualifying bet is placed, payment method/player/country restrictions apply.
get offer
Welcome Offer
#AD Bet £10 & Get £50 in Free Bets for new customers at bet365. Min deposit requirement. Free Bets are paid as Bet Credits and are available for use upon settlement of bets to value of qualifying deposit. Min odds, bet and payment method exclusions apply. Returns exclude Bet Credits stake. Time limits and T&Cs apply.
Bet £20 & Get It Back As CASH If It Loses
#AD New customers only. Place your FIRST bet on any Horse Racing market and if it loses we will refund your stake in CASH. Max refund for this offer is £20. Only deposits made using cards will qualify for this promotion. T&Cs apply.
Bet £10 Get £60 in Bonuses
#AD New UK customers only. Register using the promo code BETFRED60, deposit and place first bet of £10+ on Sports (cumulative Evens+) within 7 days of registration. First bet must be on Sports. £20 in Free Bets to be used on Sports, £10 in Free Bets to be used on Lotto and 50 Free Spins (20p per spin) credited within 48 hours of bet settlement. Further £20 in Free Bets credited 5 days after settlement. Bonuses have a 7-day expiry. Payment restrictions apply. SMS verification and/or Proof of I.D and address may be required. Full T&Cs apply.
Money Back As Cash Up To £20
#AD Max £20 refund on first bet. Bet must be placed in first 7 days of account opening. Only deposits made via Debit Card will be eligible for the promotion. T&Cs apply. 18+ begambleaware.org
Deposit £10 Get £30 Free Bets (APP Only)
#AD New UK, IE & Malta users only. Min. £10/€10 first deposit only using Debit Card or Trustly. Free bets expire in 90 days. T&Cs apply.
Bet £10 Get £20 In Free Bets
#AD Min stake £10. Min odds 1/2 (1.5). First bet only. Free bets expire in 7 days. Cashed out bets won’t apply. Payment method restrictions. Online UK customers only. 30 days to qualify for £20 in Free Bets. 18+. T&Cs apply
Bet £10 Get £30 Free Bets + £10 Casino Bonus
#AD Minimum deposit of £10 using deposit code 30F - A qualifying bet is a ‘real money’ stake of at least £10 placed on any sports market - Minimum odds of 1/2 (1.5) - Free bets credited upon qualifying bet settlement and expire after 7 days - Free bet stakes not included in returns - Casino Bonus must be claimed within 7 days • To withdraw bonus/related wins, wager bonus amount x40 within 14 days • Wagering req. vary by game • Withdrawal restrictions and Full T&C’s apply. 18+ begambleaware.org
Get £36 In Free Bets
#AD Offer includes a free £1 Race Index spread bet to try out our exciting 50-25-10 race markets. Bet with live streaming on all racing and greyhounds! Place a qualifying £25 fixed odds bet at odds of 1/2 or greater. Qualifying bet cannot be placed in-play or cashed out early. A first free £5 fixed odds bet will be credited upon settlement of the qualifying bet. 4 x following £5 free fixed odds bets will be added to your account on consecutive days. BeGambleAware.org. 18+. T&Cs apply
£25 Free Bet + 10 Free Spins
If your account has Sportsbook losses at the end of your first day's betting, QuinnBet will refund 50% of your losses as a Free Bet up to £25 (min 3 bets) Plus 10 Free Spins on Asgard Warriors. Even if your account is up, you're guaranteed a £5 Free Bet Plus 10 Free Spins provided you place at least 1 bet of £10 or greater at the minimum odds. T&Cs apply | 18+ New UK Customers Only | BeGambleAware.org
Latest racing results
Curragh
15:45
Full Result
1stHomeless Songs
11/2
2ndTuesday
11/4F
3rdConcert Hall
15/2
Nottingham
15:40
Full Result
1stFour Adaay
15/8F
2ndAbate
7/2
3rdGrandfather Tom
33/1
York
15:30
Full Result
1stTopanticipation
7/1
2ndCharging Thunder
14/1
3rdEclipse De Lunar
80/1
View All Today's Results