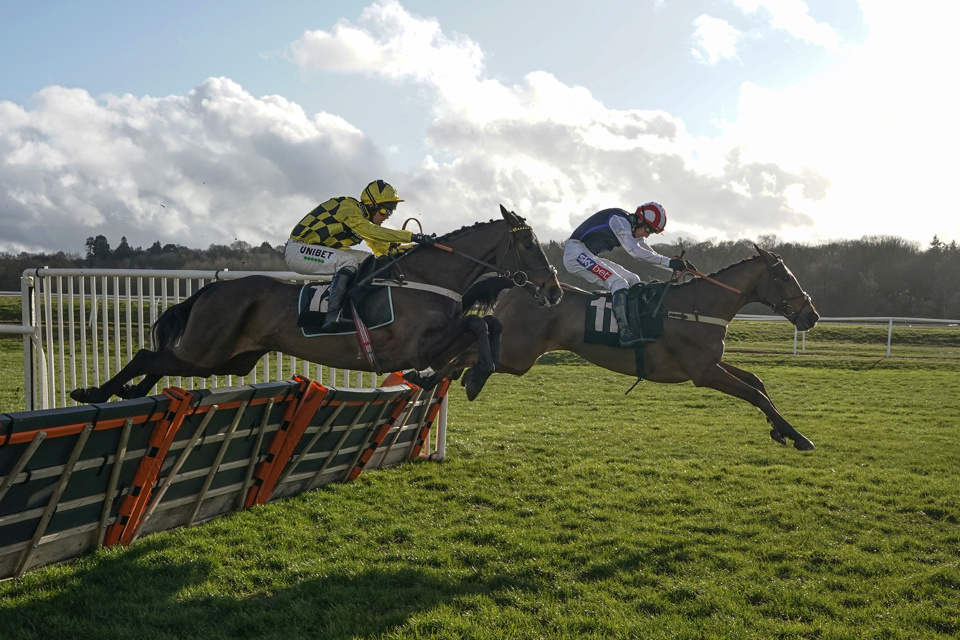 Shishkin opened his account over hurdles at Newbury last month.

Shishkin, the current favourite for next month’s Supreme Novices’ Hurdle, will have his final pre-Festival outing in a listed contest at Huntingdon on Thursday afternoon, ahead of a tilt at the Cheltenham Festival curtain-raiser.

The highly-regarded six-year-old was purchased for a large sum as a four-year-old, and although he impressed when winning on his debut under Rules in a bumper at Kempton last March, he made a disappointing start to life over hurdles, falling when a well-backed 11/8-on favourite at Newbury in December.

His return to the Berkshire course a month later was a much more positive one however, sauntering to an 11-length success and installing himself as an 8/1 favourite for the Supreme in the process - a price which has since halved.

The Nicky Henderson-trained runner carries the powerful colours of Joe and Marie Donnelly - sported by the likes of Melon and Al Boum Photo - and he is as short as 11/4-on to pick up a second success on the bounce over timber on Thursday afternoon. Shishkin will face a total of four rivals, including the Grade 2 winner Hang In There and the Jamie Snowden-trained Pacify - who’s a listed winner in his own right.

Completing the field are the Dan Skelton-trained Shan Blue, who shaped well to finish third in a listed race at Warwick last month, and the Up The Straight, who appears to be firmly out of his depth.

SHISHKIN made amends for falling on his hurdling bow at Newbury when slamming a useful type of Ben Pauling's over the same C&D by 11 lengths. Nicky Henderson's gelding proved his versatility on that occasion, with that performance coming on heavy ground, and he is expected to showcase his credentials towards the spring festivals. Shan Blue acquitted himself well when third in a Grade 2 at Warwick and he appeals as the main threat on paper, with both Hang In There and Pacify carrying penalties.

1 Nap
1 Tip
Hang In There
Jockey
Adam Wedge 10%
Trainer
Miss E C Lavelle 0%
Age
6
Weight
11-9
Form
42-U115
Pointers
-
Successful in two hurdle races at 2m and 2m 1f on good and soft ground. Well beaten at 4-1 behind Fiddlerontheroof when fifth of 7 on his latest outing in a Grade 1 hurdle race in the Group 1 Unibet Tolworth Novices' Hurdle at Sandown over 2m (soft) last month. Has won at Cheltenham and Exeter this season.
Naps:
Wolverhampton Express & Star
Andrew Bladen
#2

Pacify
Jockey
Gavin Sheehan 18%
Trainer
Jamie Snowden 13%
Age
8
Weight
11-9
Form
111112
Pointers
-
Winner of five hurdle races from 2m to 2m 2f on good and good to soft ground. Beaten 3l by Hang In There when second of 5 at 7-2 on his latest outing in a Grade 2 hurdle race in the Group 2 Supreme Trial Novices' Hurdle at Cheltenham over 2m (soft) in November last year. Has won 3 times this season.
#3

The Donnellys also have another live contender for the Supreme Novices’ Hurdle in the form of last weekend’s Dublin Racing Festival hero Asterion Forlonge - who’s an 11/2 shot for the Festival curtain-raiser at the time of writing - and with that in mind, it’s interesting to see Shiskin take his chance over just shy of two and a half miles on Thursday.

Both Shishkin and Asterion Forlonge also hold an entry in the Ballymore over two miles and five furlongs (the latter additionally has the Albert Bartlett as an option), and it’s likely that this run will help firm up their owners’ plans for next month’s Cheltenham Festival.

However, with the presence of the short-priced favourite Envoi Allen in the Ballymore, it could be that both horses opt for the more open-looking Supreme, which has four horses at a single-figure price in the betting at the time of writing.

Either way, it seems likely to be a week to remember for the Donnellys, who will be hoping that Al Boum Photo can become just the seventh back-to-back winner of the Cheltenham Gold Cup.