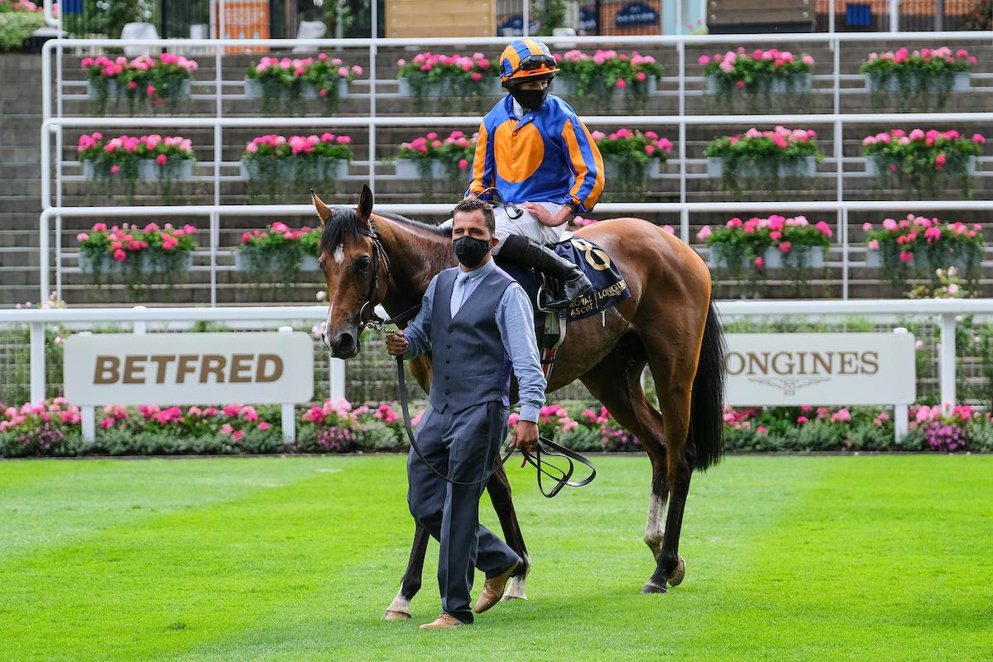 Santiago was a sparkling winner at Royal Ascot earlier in the season.

Steve Chambers profiles the Royal Ascot and Irish Derby winner Santiago, who is the current favourite for the St Leger at Doncaster, which takes place on September 12, 2020...

Having broken his maiden tag at the third time of asking with a victory at Listowel, Santiago then lit up Royal Ascot with an authoritative performance in the Queen's Vase Stakes, where he outstayed his rivals in the 1m 6f 34y contest to win by two and three quarter lengths. Showing a fine turn of foot that day, the Aidan O'Brien-trained son of Authorized also stayed on impressively which immediately got connections thinking of a tilt at the St Leger.

With dual Classic winner Love being targeted at the Prix de l'Arc de Triomphe and not at the St Leger, Santiago will fly the flag for the Ballydoyle team and having shown his class in the Queen's Vase, Santiago was then handed a stiff test in the Irish Derby. Dropping back to 1m 4f for the Curragh classic, Santiago produced arguably a career best display as he travelled smoothly through the contest before unleashing a sparkling turn of foot to put the race to bed in a matter of strides. Forced to battle off a late surge from stablemate Tiger Moth, Santiago showed tremendous guts to maintain his advantage, and with stamina assured, Santiago claimed his first Group 1 success.

Rocketing to the head of the St Leger betting following that Irish Derby win, Santiago was next seen taking on the mighty Stradivarius in the Goodwood Cup. Taking on the older horses for the first time, Santiago was sent off the second favourite behind multiple Group 1-winning stayer Stradivarius, and it was to be that John Gosden-trained superstar that prevailed and Santiago could only finish third. Beaten by over two lengths in the Goodwood Cup, Santiago lost nothing in defeat and a return to tackle his own age should see him put up a bold effort for Classic glory.

Santiago is unleashed by Ryan Moore to win the Group 2 Queen's Vase for Aidan O'Brien!

Proven class: It's very rare to see an Irish Derby winner line up in the St Leger, but Santiago has proven that he can produce the goods at Group 1 level, and having shown stamina in abundance when winning the Queen's Vase, he is tailor-made for the Doncaster classic. The son of Authorized oozes class, and sets the standard for what is a fascinating renewal in September.

Trainer record: Since the turn of the century, Aidan O'Brien has trained the winner of the St Leger six times, so Santiago will be looking to make it a magnificent seven for the master of Ballydoyle. With O'Brien's sparkling record in the final classic of the season, it can only prove a bonus for Santiago's chances, who will be the primary contender for the Irish handler, who will likely have a strong team heading to Town Moor for the Doncaster showpiece.

Ground flexibility: Having won the Queen's Vase on soft going, Santiago then scooted to Irish Derby success in good ground, so whatever the weather gods serve up at Doncaster should pose no problems for Santiago, who has been ultra-consistent this season, and can put up a first-class performance in his quest for victory.

Irish Derby Form: Questions over the strength of the Irish Derby form could have people doubting Santiago, as those that finished in behind the O'Brien-trained raider that day have failed to kick on and deliver at the highest level..

Value Disappeared: A dual-Group winner was never going to be any notable price in the St Leger, but Santiago will face some classy rivals in the Doncaster classic with Pyledriver and Hukum notable contenders, so the 2/1 available wit some firms could be a little skinny.

How will Santiago fare in the 2020 St Leger?

A proven top-class performer, Santiago is entitled to be sitting at the head of the St Leger betting and if he can replicate his Queen's Vase and Irish Derby displays then he has to be thereabouts at the finish. With stamina no issues, Santiago also possesses a sparkling turn of foot, so if it's a slowly run race then he could well sprint clear of most of his rivals, and seal the victory. The one to beat!